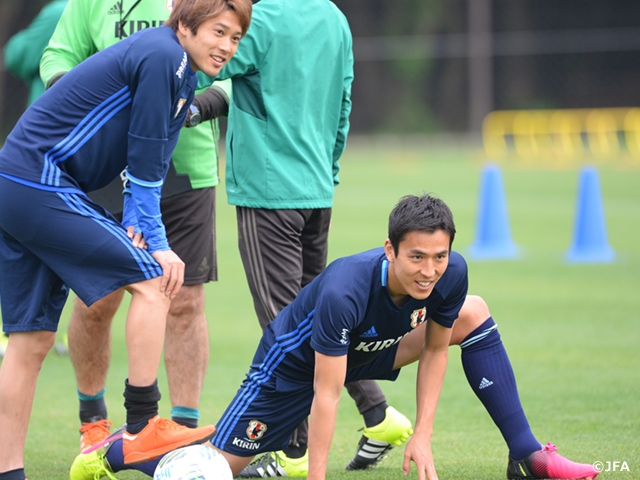 SAMURAI BLUE had the fifth day of their training, holding one practice session both in the morning and afternoon. The players seemed to be tired due to tough consecutive training sessions. However, when the coach Vahid HALILHODZIC told them: ‘I’m putting pressure on you physically and mentally now. I do know you all are tired, but we understand and are in control of your tiredness. So I want you to try hard for the KIRIN CUP SOCCER’, the players brightened up. They energetically practiced again. 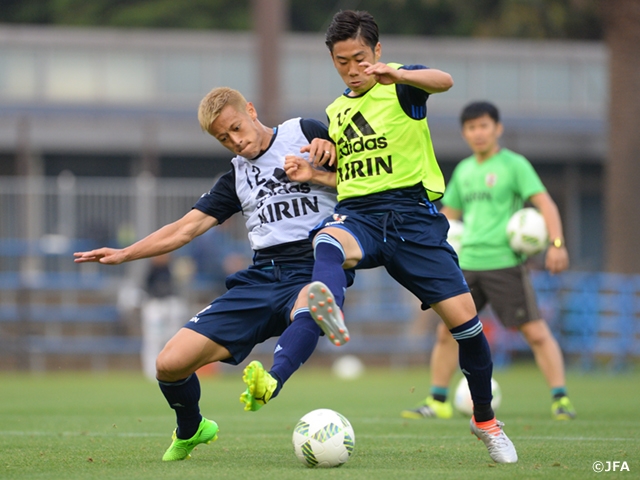 HASEBE Makoto joined the practice session on the same day, which meant all the players based abroad had arrived. The team will continue training in Chiba until 29 May before leaving for Toyota.

HASEBE Makoto (Eintracht Frankfurt/Germany)
The season in Europe is over, but this national team activity will be my seasonal swansong. I’m certainly here to get some wins in the KIRIN CUP SOCCER. It’s been a while since I played for the national team against European teams. Although the three countries, we’ll meet this time, failed to qualify for the EURO2016, they are very strong. So I’d like to win home games against them properly, while performing well. Since there are a few new young players in the team, I personally expect that there will be a more competitive atmosphere among the national team players. I’d like to perform well to get good results in preparation for the qualifiers of the World Cup.

SAKAI Gotoku (Hamburger Sport-Verein/Germany)
As I kept working on what I had to do during this season, I could win my position in the team. Contributing to the team by playing brought me some confidence. Despite the fact the season is over, the KIRIN CUP SOCCER is essential for the national team. We’ve been preparing excellently through training, and getting ourselves in good condition. Although training has been very tough, we are vocally encouraging each other everyday. I’d like to continue to practice hard without picking up an injury. We’ll win the coming two games in the KIRIN CUP and gain good results.