HOME > NEWS > Yokohama FM, Kobe, and Urawa advance to Round of 16, but Kawasaki eliminated at group stage

Yokohama FM, Kobe, and Urawa advance to Round of 16, but Kawasaki eliminated at group stage 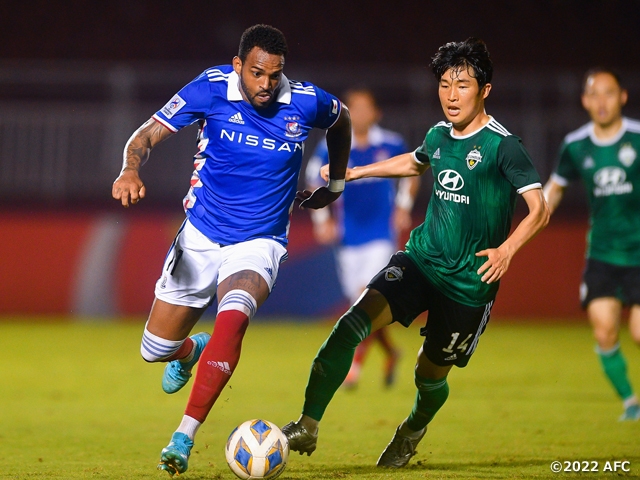 The final fixtures of the AFC Champions League (ACL) 2022 East group stage took place on Saturday 30 April and Sunday 1 May. Yokohama F. Marinos and Vissel Kobe, who entered the final fixture in first place, both drew their matches to advance to the round of 16 as group leaders. Urawa Red Diamonds, who already had clinched the round of 16, won their final match to advance through as runners-up. Despite winning their final match, Kawasaki Frontale came a point short from qualifying as runners-up and was eliminated at the group stage.

In Group H, group leaders Yokohama FM and Jeonbuk Hyundai Motors FC (Republic of Korea), who trailed Yokohama by a mere point, squared off in Ho Chi Minh City, Vietnam. Yokohama entered the match in position to qualify for the knockout stage with a draw or better but was also on the brink of elimination depending on other groups’ results if they lose this match.

Along with the group leaders of the five groups, three best teams among the runners-up will also qualify for the round of 16. However, because a team had withdrawn in Group J and had three teams remaining, the results against fourth-placed teams in other four groups would be omitted in determining the final ranking, which creates a possible scenario that sees Yokohama getting eliminated if they lose this match.

Entering a match they cannot afford to lose, Yokohama got off to a hot start, with FUJITA Joel Chima assisting the goal of Anderson LOPES in the fourth minute. For Lopes, this was his third match appearance in this ACL, and his first goal since scoring against Sydney FC (Australia) in matchday four.

Although Jeonbuk had already secured their spot into the knockout stage due to Hoang Anh Gia Lai’s (Vietnam) 1-0 victory over Sydney in the earlier match, the Korean side rallied back in order to advance through as the group leaders. In the 11th minute, KIM Bo-kyung, who has played multiple years in the J.League, converted a cross from the left side to score the equaliser with a right footed volley shot.

In efforts to retake the lead, NISHIMURA Takuma and Lopes created numerous opportunities to threaten the opposing goal but failed to get the ball past the Jeonbuk goalkeeper.

The second half saw Jeonbuk make number of substitutions to add layers to their offence, which triggered Yokohama to also make changes just around the hour mark, as coach Kevin MUSCAT brought in MIZUNUMA Kota, NAKAGAWA Teruhito, and YAMANE Riku, before introducing Marcos JUNIOR and NAGATO Katsuya later in the match.

Despite dominating both ball possession (68%) and shots-taken (17-9), Yokohama failed to score the second goal, but were able to secure a 1-1 draw and the one point they needed to stay at the top of the table.

Following the match Yokohama’s coach Muscat commented, “The players did well to express the attacking football style we are striving for, despite facing an opponent who was difficult to breakdown. The players have shown great improvements over the course of this tournament, as they have displayed great football under a different environment than usual.”

Kawasaki eliminated despite finishing second with a win

In Group I, Kawasaki faced Guangzhou FC (China PR) at Johor Bahru, Malaysia. Although the Japanese side managed to finish the group stage in second place with a 1-0 victory, thanks to the goal of CHINEN Kei, they failed to finish within the best three teams among the runners-up and were eliminated from the competition.

Kawasaki had dropped to third place after losing to Ulsan Hyundai FC (Republic of Korea) on Wednesday 27 April, but still had a chance of taking the group lead with a win over Guangzhou, while the other fixture between Johor Darul Ta'zim (Malaysia) and Ulsan ended in a draw.

In case they finish in second place, they would need to be within the top three teams among the runners-up, with the results against fourth-placed teams being omitted to determine the ranking,

While Kawasaki defeated Guangzhou 1-0, Johor won their match against Ulsan with an own goal scored during additional time of the second half, securing the group’s top spot with a 2-1 victory. With the match between BG Pathum United FC (Thailand) and Jeonnam Dragons (Republic of Korea) in Group G ending in a draw, Kawasaki’s elimination was determined, as they fell short from finishing within the top three teams among the runners-up.

Dramatically rotating their starting line-up for the final group stage match, Kawasaki scored the opener in the 14th minute, when Chinen responded to the pass of KOBAYASHI Yu before firing a right footed shot that pierced the net. Despite creating numerous opportunities, this goal turned out to be the only goal scored in this match, as the J.League champions walked away with a 1-0 victory.

With this win Kawasaki finished the group stage in second place with 11 points while Johor took the group lead with 13 points.

“We did everything we could, but it is unfortunate that we couldn’t finish in first place,” said Kawasaki’s coach ONIKI Toru after the match, as the coach continued to comment, “Considering the regulation, I knew that we had to finish first in order to advance through. I feel responsible for this outcome.”

Chinen, who scored the game-winner in this match, also mentioned, “Each match was a tough match. We did everything we could as a team, but it was a frustrating result. We hope to make up for this in the J.League.” 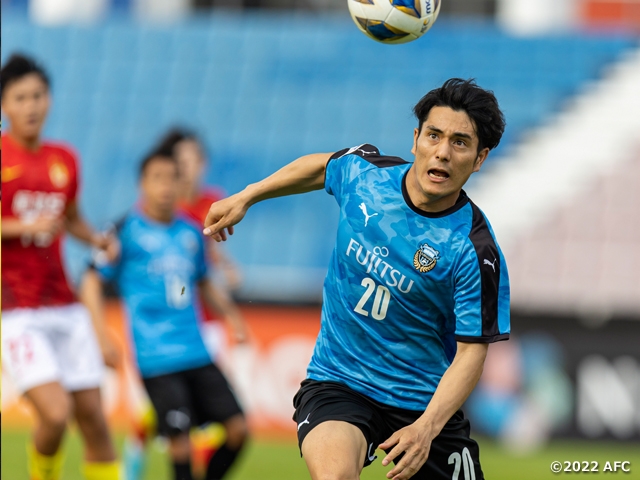 MUTO scores in return as Kobe advance through

Having already clinched the knockout stage, Kobe played their final match in Group J against Kitchee SC (Hong Kong) at Buriram, Thailand. MUTO Yoshinori, who entered the match as a substitute, scored in his first match back from injury as Kobe drew 2-2 to finish the group stage in first place.

With their group being competed by three teams, Kobe had a bye in the previous matchday, entering this final fixture with a five-day rest. Needing just a draw to top the group, Kobe faced Kitchee with a line-up consisting of players with limited playing time. Despite struggling to create chances in the early minutes, Kobe took the lead in the 44th minute with LINCOLN converting the PK he earned himself.

Kitchee, who needed a point to advance through to their first ever ACL knockout stage, rallied back aggressively, scoring the equaliser through a PK converted by Dejan DAMJANOVIC during additional time of the first half.

In efforts to change the dynamics of the match, Kobe used one of their substitutions to change their formation to start the second half, before sending out OSAKO Yuya, GOKE Yuta, and Muto in the 64th minute, which led to the go-ahead goal scored by Muto in the 87th minute.

However, Kitchee’s strong desire to clinch the round of 16 prevailed at the end, as the Hong Kongese side once again scored the equaliser in additional time, as Raul BAENA converted a delivery from a corner kick. Although Baena was sent off in the closing minutes after receiving his second yellow of the match, Kitchee managed to hang onto the 2-2 draw to clinch the knockout stage along with Kobe, who finished as the group leaders.

Following the match, Muto, who scored a goal in his first match back from injury, commented, “I was determined to score a goal because I had caused the team a lot of trouble for a long time. I am glad I got the goal, but I am disappointed that we didn't win the match. Perhaps we were a little too passive at times.”

Kobe’s coach Miguel Angel LOTINA also reflected on their performance in the group stage, “We showcased worthy performances to advance through, but the coemption will intensify from the next round onwards, so we must be more competitive to make a deep run.” 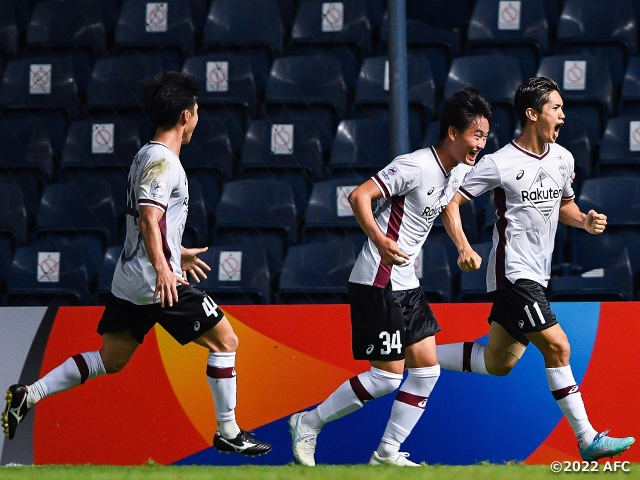 Urawa win two in a row to advance through

Urawa, who already had clinched the round of 16, faced Shandong Taishan FC (China PR) at Buriram, Thailand. With MATSUO Yusuke and CHINEN Tetsuya both scoring a brace, the team won 5-0 to mark their fourth win, including three consecutive shutout victories, to close out the group stage.

Although Urawa still had a chance to advance as the leader of Group F, they finished as runners-up after Daegu FC (Republic of Korea) defeated Lion City Sailors FC (Singapore) 2-1 to tie Urawa in points, while the Korean side held the advantage in head-to-head record between the two.

In their final match, Urawa rotated nine players from their starting line-up, giving opportunities to those who were limited with their playing time. YASUI Kaito, who featured the starting line-up for the first time in four matches, scored the opening goal in the 13th minute, followed by the 34th minute goal of Chinen, who also started for the first time in four matches, before Matsuo made it 3-0 during additional time of the first half.

Despite the sudden downpour, Urawa continued to dominate in the second half, as Matsuo scored his second goal of the match in the 69th minute to make it 4-0, before Chinen also marked his second goal in the 85th minute.

After the match, Urawa’s coach Ricardo RODRIGUEZ commented, “This tournament has helped the team mature. Above all, we learnt how to attack against opponents who defend by dropping deep in their own territory.” Matsuo, who scored his fifth goal of the competition, also mentioned, “Goal difference is a key factor in the group stage, so I feel like I was able to contribute for the team’s advancement. I will continue to give my best effort once we return to Japan.” 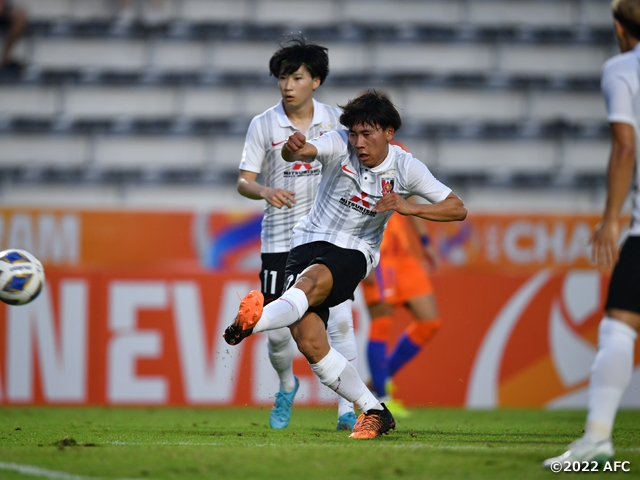 Round of 16 fixtures determined

With the completion of the East group stage, all 16 teams advancing through to the knockout stage have been determined. Pathum, Daegu, Yokohama, Johor, and Kobe topped their group to advance, while Urawa, Jeonbuk, and Kitchee were the three teams holding the best record among the runners-up.

The East side of the bracket will take place in August, as matches will be played in a single-match knockout format with the round of 16 taking place on Thursday 18 and Friday 19 August. The fixtures are as follows: Daegu vs Jeonbuk, Pathum vs Kitchee, Urawa vs Johor, Yokohama vs Kobe. The kick-off time of each match will be announced in due course.

The quarterfinals are scheduled on Monday 22 August, semi-finals on Thursday 25 August, and the final, which will be played in a home-and-away format, on 19 (West) and 26 (East) February 2023. The West side of the bracket will take place between 3 and 10 February 2023.

Archive
NEWS Menu
HOME NEWS Yokohama FM, Kobe, and Urawa advance to Round of 16, but Kawasaki eliminated at group stage