Urawa and Kobe clinch Round of 16, Yokohama FM keep group lead, while Kawasaki drop to third in ACL Group Stage 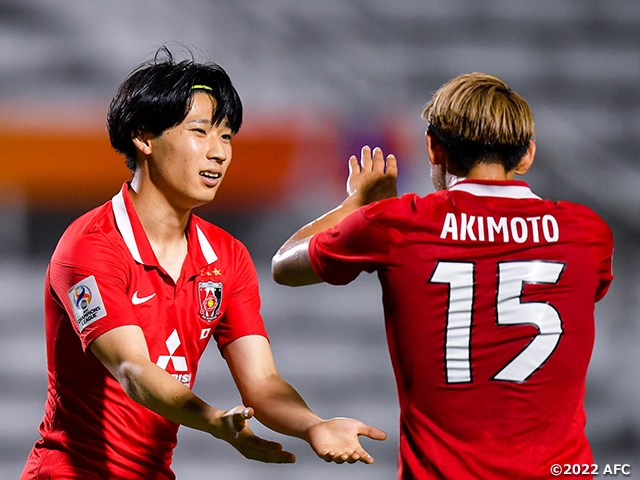 The fifth fixtures of the AFC Champions League (ACL) 2022 East group stage took place on Wednesday 27 and Thursday 28 April, which saw Urawa Red Diamonds claim their third win to secure a top-two finish in the group stage, while Vissel Kobe, who did not have a match, also qualified for the round of 16 based on the results of other groups. Yokohama F. Marinos maintained their top spot in the group with three consecutive wins and made a big step forward to advance, but Kawasaki Frontale suffered their first loss of the competition and dropped to third place, putting them in a tough position to advance with just one match remaining.

In Group F, Urawa played Lion City Sailors FC (Singapore) in Buriram, Thailand, where they scored six goals, including the brace of MATSUO Yusuke, who entered as a substitute in the second half, to mark there third win of the group stage and clinch a spot in the round of 16.

The match saw Urawa take the initiative from the start and score the opening goal in the 14th minute, when MAWATARI Kazuaki responded to David MOBERG’s through ball and fired a right footed shot. Once taking the lead, Moberg and Alex SCHALK created chances by combining with KOIZUMI Yoshio and SEKINE Takahiro to threaten the opposing goal.

Despite the superb saves made by the Lion City goalkeeper Hassan SUNNY, Schalk showcased a fantastic individual effort to score a goal in the 39th minute, giving Urawa a two-goal lead at halftime.

Matsuo, who entered the match around the hour mark, quickly got involved, as he responded to the pass delivered by Sekine to score a goal in the 62nd minute. With Matsuo adding another goal during additional time, Urawa won the match 6-0.

To advance to the knockout stages, teams must either finish first in their respective groups or finish as the three best runners-up from the five groups in the East. In addition, since Group J only has three teams remaining after Shanghai Port FC (China PR) withdrew from the competition, the results against fourth-placed teams will be omitted in this ranking, setting up an even stricter condition for the runners-up.

With Daegu FC (Korea Republic) winning their fixture against Shandong Taishan FC (China PR) 4-0, Urawa and Daegu are now tied in points with 10 but trail the Korean side due to the results of the head-to-head record (a draw and a loss). Even after omitting the points earned against fourth place Shandong, Urawa’s points (seven) exceeds the maximum possible points that can be earned by the runners-up of Group G and I (six and five), Urawa have now clinched the knockout stage with one fixture still remained to be played in the group stage. This will be their first round of 16 appearance since 2019.

Urawa’s coach Ricardo RODRIGUEZ reflected after the match, “We needed to score goals in order to advance, and the players scored many great goals.” Koizumi also commented, “This was a very positive match, both as a team and as an individual.” 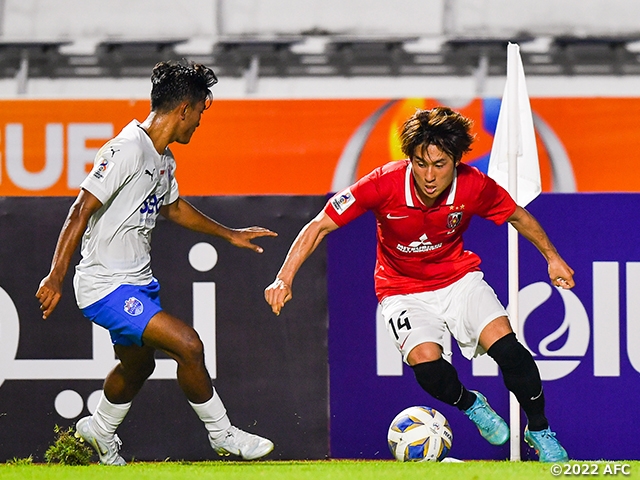 In Group J, despite not having a match this matchday, Kobe have also clinched at least the top three spots among the runners up to secure their spot into the round of 16. This will be Kobe’s first appearance in the knockout stage since 2020, in which they reached the semi-finals.

Competing in the group with only three teams, Kobe currently hold the group lead with seven points (two wins and one draw), which is more that what the runners-up of Group G and I can earn even if they win their final fixture.

Since taking over the helm in April, Kobe's coach Miguel Angel LOTINA has set his sights on advancing to the knockout stages in his inaugural tournament, as well as on instilling the team model and improving the quality of play.

“Now that we have achieved our first goal, we will continue to practice and improve our team in the remaining time to finish on a high note,” said the Spanish coach.

On this day, second place Kitchee SC (Hong Kong) increased their tally to six, with a 3-2 victory over Chiangrai United FC (Thailand). Kobe can now secure the group lead with a draw or better in their final group stage match against Kitchee on Sunday 1 May.

Ahead of their final fixture, Kobe’s YAMAGUCHI Hotaru mentioned, “We want to advance in first place. We are hoping to win the final match and carry the momentum into the J.League.” 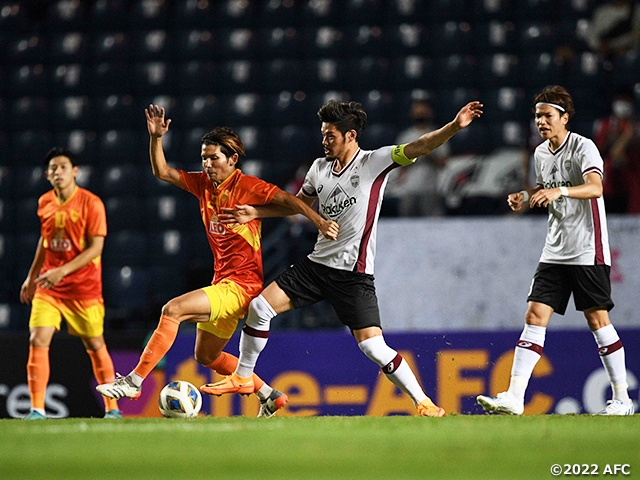 At Ho Chi Minh City, Vietnam, Yokohama FM held onto their lead in Group H with a 2-0 victory over the local side Hoang Anh Gia Lai (Vietnam), thanks to the goals of Marcos JUNIOR and HATANAKA Shinnosuke. They will now head into the final fixture against second place Jeonbuk Hyundai Motors FC (Republic of Korea) with the group lead on the line.

The match started with Yokohama moving the ball with great tempo to construct their offence. The opening goal came in the 24th minute, when NAKAGAWA Teruhito received the pass of Leo CEARA before being brought down inside the penalty area. Marcos Junior stepped up to the spot and converted the PK to give Yokohama the lead.

Yokohama continued to dominate the match in the second half, as they sent out players like MIYAICHI Ryo, YOSHIO Kaina, and MIZUNUMA Kota off the bench. Despite the misfortune of having the header struck by Leo Ceara denied by the post, Yokohama managed to score their second goal in the 83rd minute when Hatanaka converted a corner kick with a header. With this 2-0 victory, Yokohama have now won three consecutive matches with a shutout.

On this day, Jeonbuk defeated Sydney FC (Australia) 3-2 to remain in second place, trailing just one point behind Yokohama. The two sides will clash on Sunday 1 May to determine the final standing.

“This was not an easy match, but the players showcased a superb performance,” said Yokohama FM’s coach Kevin MUSCAT, and continued to share his take on the team, “Our condition and performance are getting better with each match. We will concentrate on the match in front of us and try to finish the group stage on a high note.” 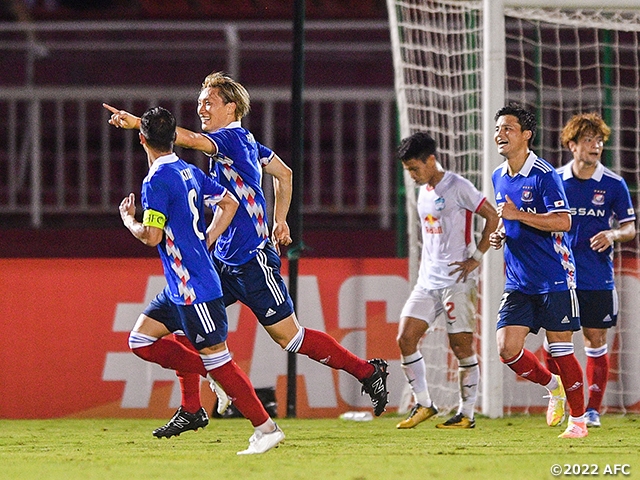 In Group I, Kawasaki faced Ulsan Hyundai FC (Republic of Korea) at Johor Bahru, Malaysia, where they lost 2-3. Suffering their first loss of the tournament, Kobe dropped from first to third place in the group, putting themselves in a tough spot to advance through to the round of 16.

Kawasaki entered the match with great aggression against Ulsan, who they drew 1-1 in the first leg. However, the players looked heavy in the scorching heat of Malaysia, giving up space for Ulsan’s Valeri QAZAISHVILI and LEONARDO to work with.

After conceding the opening goal to Leonardo in the 14th minute, Kawasaki conceded the second goal to UM Won-sang in the 20th minute.

Trailing by two goals, Kawasaki managed to deduce their deficit in half in the 40th minute, when MARCINHO responded to the cross sent by TANIGUCHI Shogo to set up the goal of Leandro DAMIAO but gave up another goal early in the second half, this time to Qazaishvili.

In efforts to rally back, Kawasaki sent out KOBAYASHI Yu, Joao SCHMIDT, and YAMAMURA Kazuya off the bench and switched their formation to have two strikers upfront. In addition, they brought in CHINEN Kei and MIYAGI Ten to add more layers to their offence but couldn’t find ways to breakdown the Ulsan defence. Kawasaki managed to score another goal in additional time, when Damiao converted the pass of Taniguchi but fell short from equalising the match, losing the match 2-3.

With Johor Darul Ta'zim (Malaysia) also increasing their tally with a 2-0 victory over Guangzhou FC (China PR), Ulsan and Johor lead the group with 10 points, with Johor holding the advantage in head-to-head record. Kawasaki are now in third place (eight points) with one match left to play.

Kawasaki must now win their final fixture against Guangzhou on Saturday 30 and their fate will depend on the result of the fixture between Ulsan and Johor.

“We conceded from our own mistakes to make it tough on ourselves,” said Kawasaki’s coach ONIKI Toru, while veteran midfielder IENAGA Akihiro commented, “It is not like we don’t have any chance anymore. We will believe in ourselves and continue to fight.” 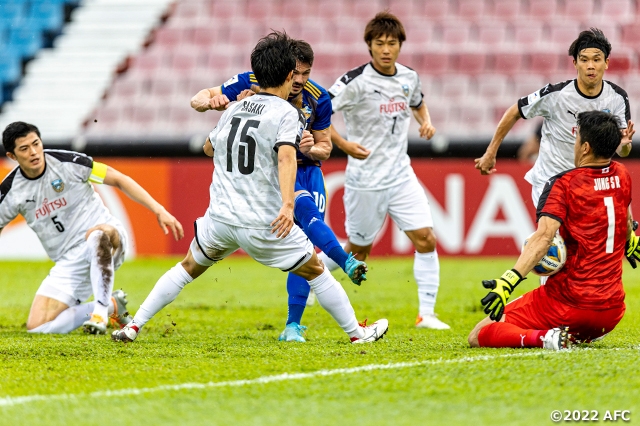 Holding a two-point lead over second place Melbourne, Pathum can win the group with a win over Jeonnam Dragons (Republic of Korea) on Monday 30.

The group stage in the West, which started on 7 April, concluded on 27 April, setting up half of the bracket for the round of 16.

The knockout stage will be carried out on a separate scheduled between the East and West, as the East will hold their fixtures in August, while the West will have their matches played between 3-10 February next year. The final will be held in a home-and-away format, with matches scheduled to be played on 19 (West) and 26 (East) February.