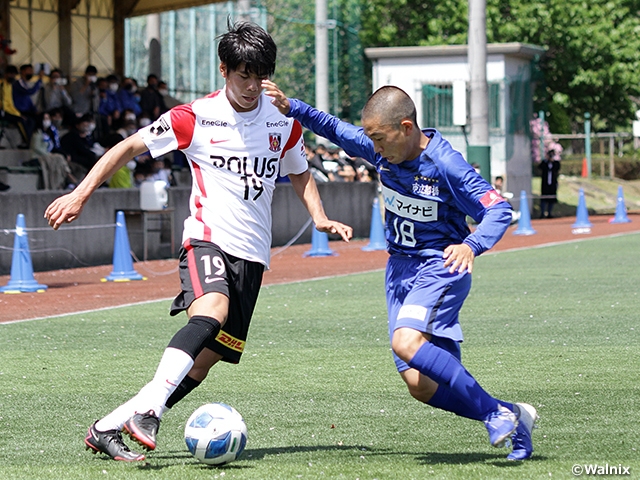 At Funabashi Hoten Park, a match between two teams who started the season with back to back losses, Funabashi Municipal High School (Chiba) and Urawa Red Diamonds Youth (Saitama) squared off against each other. As Urawa’s APITZSCH Akira (#5) mentioned, “This was a match we couldn’t afford to lose,” both teams showcased great intensity from the start.

Especially for Funabashi Municipal, who suffered a 0-9 loss to Aomori Yamada High School (Aomori) last week, this was an important match for them to bounce back, as coach HATA Shugo gave a pep talk to his players to use the experience as motivation.

The coach also reflected on last week’s match, “Through our previous match, we were able to learn that the league’s standard is set at a much higher mark. We lacked speed, strength, and technique when playing under pressure. Our opponent had the upper-hand in all aspects.”

The players of Funabashi Municipal mentioned that the team showed great enthusiasm during training sessions to change the team’s vibe, which translated to their aggression in the early minutes of the match, as coach Hata looked back on the team’s performance, “It wasn’t exactly what we were looking for, but the players did their job to overwhelm our opponent in the early minutes.” However, the team failed to convert their opportunities, including a PK in the first half.

For the visiting Urawa side, coach IKEDA Nobuyasu reflected on the team’s first half performance, “In our first two matches, we lost our composure after conceding in the first half, so it meant a lot for us to keep the first half scoreless.” The coach also mentioned that he focused on creating a positive atmosphere so that the players will not be discouraged by the two losses, as he sent off the players by praising them during halftime. 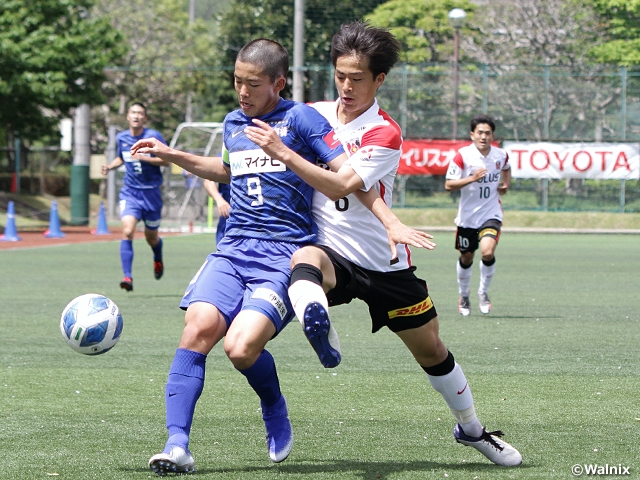 While both sides continued to showcase aggressive battles in the second half, Urawa started to exploit the open space behind the opposing defence line, inducing a critical foul committed by Funabashi’s OGASAWARA Hiromasa (#4), who was sent off from the match.

Although the home side was left with 10 men, the Funabashi players made extra efforts to cover the numerical disadvantage, keeping the Urawa side at bay. With both sides leaving everything on the pitch, the match ended in a scoreless draw, giving the two sides their first point of the season.

HATA Shugo, Coach (Funabashi Municipal High School)
We actually intended to showcase a style where we build our plays form the defence line, but it didn’t go as we planned. However, I feel like our players’ discipline work ethic was on full display today. It would have been better if we scored a goal in the first half, but all and all, the players did a great job.

MF #6 HIRAMA Rikuto (Funabashi Municipal High School)
After conceding nine goals last week, we worked on our defensive shape in our training sessions this week. It would have been better if we won this match, but this clean sheet gives us great confidence moving forward. I am confident with my long feeds, so I was anticipating delivering long balls into the open space. 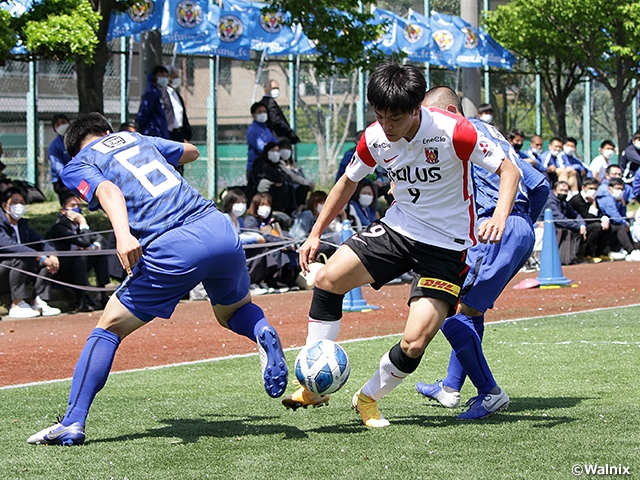 IKEDA Nobuyasu, Coach (Urawa Red Diamonds Youth)
The fact that Funabashi Municipal High School failed to convert their PK was a huge break for us. This year’s players are always looking out for each other and they are capable of making runs for the team. They played very well today. However, we must improve our offence so that we can create more opportunities inside the box.

DF #5 APITZSCH Akira (Urawa Red Diamonds Youth)
We had conceded goals in back to back matches leading to this one, so we really focused on keeping a clean sheet today. We tried to keep our defence line close to our offence, while also manging the risks. Although we are disappointed that we couldn’t win, we are proud that we managed to keep a clean sheet. 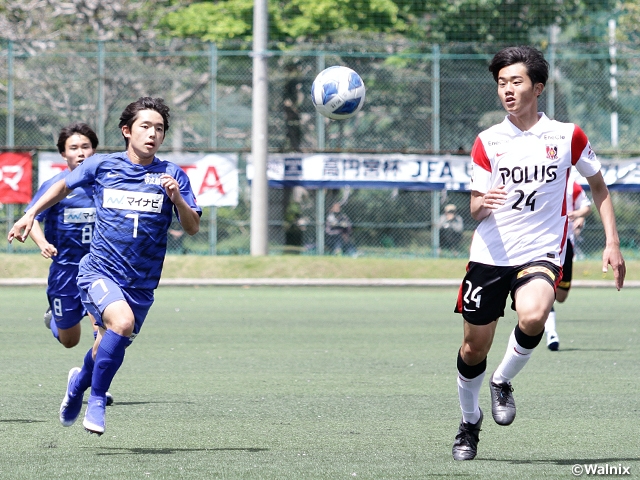 After NOZAWA Reon (#18) gave FC Tokyo U-18 (Tokyo) the lead in the first half, YOKOMIZUO Kota (#10) scored the equaliser for Yokohama F.Marinos Youth (Kanagawa) in the second half, giving the two sides a point apiece. Aomori Yamada High School(Aomori) won their home match against Yokohama FC Youth (Kanagawa) to start the season with three consecutive victories. Kashiwa Reysol U-18 (Chiba) earned their first win of the season with a 3-2 win over Omiya Ardija U18 (Saitama). In a fixture between two sides who started the season with back to back wins, Shimizu S-Pulse Youth (Shizuoka) won against Ryutsu Keizai University Kashiwa High School (Chiba) with the deciding goal scored by KANEKO Seita (#7) in the 69th minute.