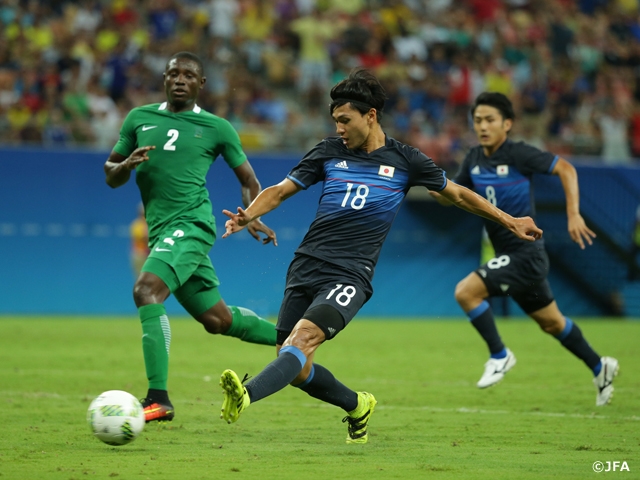 The Japan’s Olympic squad lost to Nigeria 5-4 in the first game of the Rio de Janeiro Olympics on Thursday 4 August at Amazonia Arena in Manaus, Brazil.

As Sweden drew with Colombia 2-2 in the first match, Japan are currently in fourth place in Group B, with Nigeria in the lead (on three points) followed by both Colombia and Sweden (each with one point).

Japan used a 4-3-3 formation with ENDO Wataru (Urawa Reds) as a defensive midfielder and both midfielders OHSHIMA Ryota and HARAKAWA Riki (both Kawasaki Frontale). Forward KOHROGI Shinzoh (Urawa Reds) played in the centre with MINAMINO Takumi (Salzburg/Austria) on the right and NAKAJIMA Shoya (F.C. Tokyo) on the left.

Just under seven hours before the kick-off, after 14:00 on the day, Nigeria arrived from the USA, where they had been holding their training camp. However, the team did not show any ill effects from travelling, going close to the goals with their individual skills right from the beginning.

After six minutes, although the goalkeeper KUSHIBIKI Masatoshi (Kashima Antlers) punched away a shot from the forward EZEKIEL Imoh, which came from a right throw-in, the forward UMAR Sadiq on the opposite side slotted it into the goal to strike the opener.

Japan attacked back soon after. Just two minutes later, MINAMINO, who received a return pass from the defender FUJIHARU Hiroki (Gamba Osaka) in front of the goal, was taken down by the defender AMUZIE, and earned a penalty kick. In the ninth minute, KOHROGI calmly aimed at the opposite side of the opponent’s goalkeeper to score the equaliser.

However, Nigeria soon scored another goal to recover their one-goal lead. The defender SHEHU Abdullahi got through on the right side to send in a cross. After the defender MUROYA Sei (F.C. Tokyo) and the midfielder ETEBO Oghenekaro competed to reach the ball, ETEBO slotted it into the goal.

Japan were once more on the hunt for a goal. In the 12th minute, MINAMINO, who received a through ball from OHSHIMA, faced the goalkeeper 1-on-1. He scored after observing the goalkeeper’s movement, and levelled the game.

The match slightly slowed down with the score at 2-2. Nigeria stayed ambitious for goals whenever they had opportunities, including with a long-distance shot in the 19th minute by the defender AMUZIE Stanley, which was saved by the goalkeeper Kushibiki. Japan passed the ball around to build up attacks. After 24 minutes, NAKAJIMA dribbled up close to the goal, only for it to be saved by the opponent.

UMAR Sadiq and ETEBO Oghenekaro led Nigeria in attack, using the space on the right. Then in the 42nd minute, the team struck their third goal.

UMAR Sadiq dribbled up and passed the ball to ETEBO. Although the defender UEDA Naomichi (Kashima Antlers) once saved a shot from ETEBO, he reacted to the loose ball to score a goal with his right foot.

Although Japan was eager to attack back, they conceded another painful goal at the beginning of the second half. UMAR Sadiq was taken down by a Japanese defender in the penalty area and earned a penalty kick; ETEBO scored, and stretched their lead to two goals.

Soon after this setback for Japan, the forward ASANO Takuma (Arsenal FC) came off the bench to replace HARAKAWA. Although MINAMINO reacted to a right cross from MUROYA to fire in a shot in the 57th minute, it went wide.

After 66 minutes, the goalkeeper Kushibiki reacted to a cross from the midfielder MIKEL John Obi. However, ETEBO received a loose ball and sent the ball into the unguarded goal to build a three-goal lead.

In the 70th minute, FUJIHARU took a pass from NAKAJIMA, and crossed the ball. ASANO, who reacted to the cross, scored a goal with his left heel.

Although it was disallowed for offside, NAKAJIMA received ASANO’s pass in the space behind the defender, and took a shot, which hit the right goalpost. Japan stayed ambitious for goals, sending the forward SUZUKI Musashi (Albirex Niigata) on for KOHROGI in the 70th minute, and midfielder YAJIMA Shinya (Fagiano Okayama) on for NAKAJIMA in the 76th minute.

After five minutes of injury time, SUZUKI, who received the ball from OHSHIMA, got through a defender to score with his left foot, closing the gap to one goal. However, Japan could not close the one-goal deficit before the final whistle, and failed to earn any points.

Japan will face Colombia for their second game on Sunday 7 August at the same stadium, Amazonia Arena. 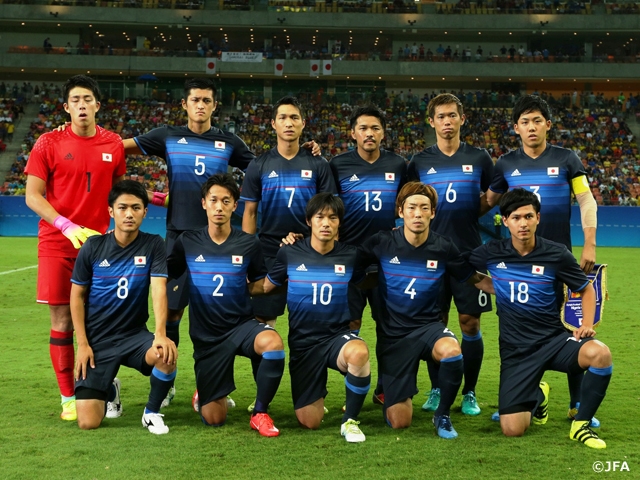 TEGURAMORI Makoto, Coach
Although we did expect that the opponent will be aggressive at the beginning of the game, we felt under pressure and started to play hastily before finding how to react to their number 13. We weren’t performing efficiently especially in the defending third. We need to analyse what caused this –nervousness in the opening game or the high quality of the opponent, so that we can avoid conceding many goals in calmer and stronger periods of play. We didn’t take the opponent lightly at all. However, some of the players, who may have felt responsibility for conceding goals, tried too eagerly to perform better.

Despite our loss in the first game, we cannot finish here. I told the players: ‘we need to recover quickly, so that we can avenge Nigeria in the knockout stage.’ We’d like to work on playing patiently to win, how to start the game, and how to recover quickly from our mistakes. I believe we can refresh after the mental damage from this match by showing off our recovering strength. We’d like to aim at that.

DF #6 SHIOTANI Tsukasa (Sanfrecce Hiroshima)
As we focused too much on how to start the game, we played too carefully at the beginning of the match. Nigeria’s third and the fourth goals had a major impact on the game. When we need to defend as a team, we should focus on doing so in the next match. How much we can coordinate with the players nearby is also a vital aspect of our game. As the next opponent will also play after a two-day break, we’d like to prepare well. How well we perform will be determined by our condition.

MF #18  MINAMINO Takumi (Salzburg)
I’m in shock that we conceded five goals. Having said that, all of them were due to our mistakes or carelessness, which we should be able to fix. We scored four goals in the way we wanted to. We’d like to continue to do so in the next match. As we are in a sink-or-swim situation now, I’d like to reset my mind to face the next game.

MF #3  ENDO Wataru (Urawa Reds)
In the second half, the defenders performed more stably while the attackers put pressure on the opponent up front. We could have done that earlier. We should play more simply from the beginning – which is our task for the next match. I’d like to stay positive that we scored four goals.

SIASIA Samson, Coach (Nigeria)
I didn’t expect this many goals, but I’d like to point out the players performed well to get a good result. As it took a while for us to come here, we couldn’t practice well in the past two days. We were exhausted. Since Japan is an excellent team, we aimed to score as many as possible. We kept playing with a fighting spirit. Having said that, if the game had been five minutes longer, we would have conceded another goal. It was good that we won the match.