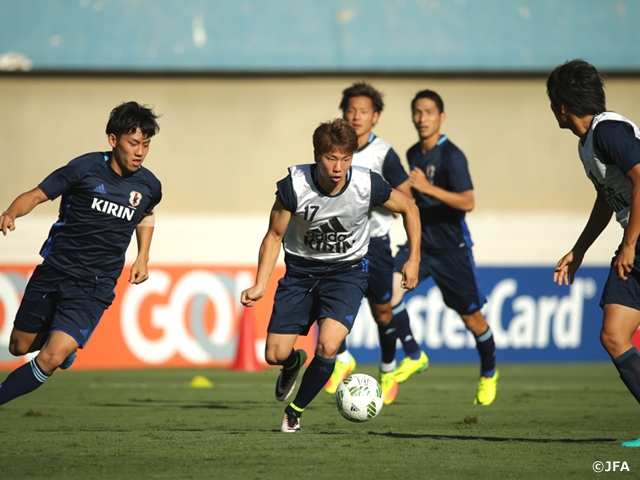 On Friday 29 July, Coach TEGURAMORI Makoto spoke to media at the press conference held ahead of the international friendly against Brazil taking place on Saturday 30 in Goiânia located in the central region of Brazil. Japan’s boss said “I would welcome both boos and praises in this football kingdom of Brazil.”

On that day, the team had an official practice at the match venue of Estádio Estadual Lourival Baptista, making sure of the pitch and working up a sweat for about 60 minutes with low humidity but strong sunshine. Defender IWANAMI Takuya (Vissel Kobe), who was out for the practice on the previous day due to his unfavourable condition, came back to the team practice, while Midfielder OHSHIMA Ryota (Kawasaki Frontale) still worked out separately.

After fitness drills including running and sprinting, they went through offensive build-ups in a half pitch and later engaged in a scrimmage. Review of defensive tactics against set-pieces and shooting drills were also carried out. The training session was open to public and saw enough local football fans to fill up the stand cheering for the players when scoring a goal and booing at them when they missed. The audience was full of never-resting atmosphere the football kingdom of Brazil is known for.

Coach Teguramori expressed his expectation saying, “the key is how you can take advantage of the width of the pitch when you attack against Brazil who are very fast and strong. We will not have a better chance than this in terms of playing against the players who are capable of playing for the best clubs in the world. I want my players to play to their best ability without backing down.”

With their mission to win the gold medal at the Olympic Games held in their home land, Brazil have prepared themselves in their camp since Monday 18 July. Incorporating three over-aged players, forward Neymar (FC Barcelona), midfielder Renato Augusto (Beijing Guoan) and goalkeeper Fernando Prass (Palmeiras), their offensive squad are ready to tally up goals in front of their home fans.

Their coach Micale said in the press conference, “Japan may stand against us in the knockout stage on our way to the gold medal. Considering that, it’s a good test for us tomorrow.”

As Brazil is placed in Group A in the tournament, it is still possible for Brazil and Japan to face each other in the quarter-final depending on the tournament seeds based on their group round results. Midfielder ENDO Wataru (Urawa Reds) said, “tomorrow we want to create good offence originating from our patience and good defence. We will do our best to play a good match and get good results.”

TEGURAMORI Makoto, Coach
Tomorrow is our final test before the Olympics. I want to expose ourselves to the dominance by one of the best countries in the world. In the training match on the other day, we tried to do too much of compact offence after defending compactly also. But in order to change the organisation of the opponents, the key is how much you can take advantage of the width of the pitch when you attack. If we can utilise the width in limited chances of offence and hold the individually-skilled opponents scoreless, we will have various things ready to have a good result.

Brazil will bring out great players onto the pitch. We will not have a better chance than this in terms of playing against the players who are capable of playing for the best clubs in the world. This is a kind of match where players experience the value of being on the national team the most. I want them to play to their best ability without backing down. But at the same time, we have to be very careful not to lose our confidence if they beat us hard, or not to be overconfident if we win. As we play through this valuable 90 minutes, we need to keep the mental balance and tell ourselves that the test match tomorrow seems everything but it is not.

MF #3  ENDO Wataru (Urawa Reds)
Playing patiently will be the most important thing. If we can keep defending patiently through the stretch dominated by our opponents and successfully hold them scoreless, certainly we will have a chance. We have played in Asia with that kind of flexibility and risk-taking mentality. So we just keep playing that way against countries outside Asia.

MF #18  MINAMINO Takumi (Salzburg/Austria)
I am looking forward to it so much. It will be a great experience for me to play against world-class star players, and for this team also it will be a good chance to find out how much Japan can play against one of the favourites for the gold medal.

MF #10  NAKAJIMA Shoya (F.C. Tokyo)
I have got some idea about how our over-aged players like to play. As I will keep that in mind, I think the best way to do it is not overthink and enjoy playing. For Japan to win, it’s important to keep defending and take advantage of the small number of scoring chances we get.

FW #13  KOHROGI Shinzoh (Urawa Reds)
Individually Brazil may be better than us, but we want to be better collectively. To do that, we just have to create outnumbering situation always, like having two of us against one opponent. At international matches you have to be mentally strong not to be overwhelmed by away supporters, so this match against Brazil will be a good experience for every one of us. I want to tell my teammates that we just need to do everything we can do at this point and then have fun playing.

DF #4  FUJIHARU Hiroki (Gamba Osaka)
I was tired after the long trip, but my condition has got better and I have to get it even better. I want to find out how much we can play tomorrow against Brazil, and then go out for the opening match. No wonder we are in Brazil as we have so many fans only for practice. But the more fans for our opponents we have, the more motivated I get. So that’s good for me. A win there will make me very happy.

Micale, Coach of Brazil National Team
I want to play all of my players in tomorrow’s important match as our preparation for the Games. Japan are a good team and they may stand against us in the knockout stage on our way to the gold medal. Considering that, it’s a good test for us tomorrow. I have Neymar be captain of the team. That’s because he is capable of behaving professionally and influencing others with leadership, but all the players on this team are so focused and working out so effectively that anybody could be a good captain. They all will be capable of playing on Brazil’s top team in near future and I have high expectation on them.