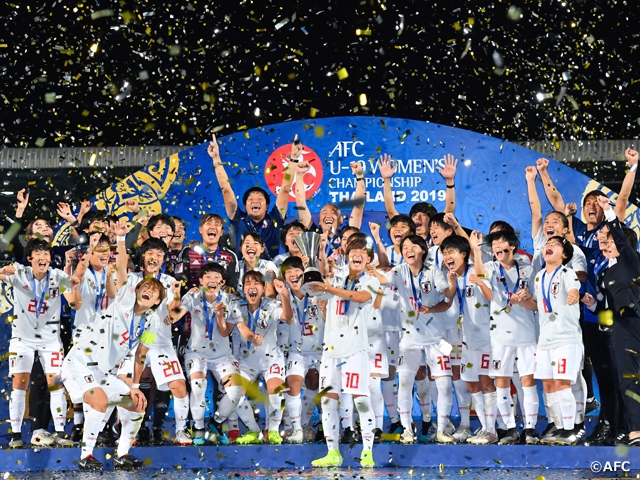 At this final, where their third consecutive title was at stake, coach IKEDA Futoshi started the same line-up from their semi-final match played three days ago, as TANAKA Momoko started in goal with the defence line of FUNAKI Nodoka, GOTO Wakaba, TAKAHASHI Hana, and MATSUDA Shino. While NAKAO Momo and KANNO Oto were named as the defensive midfielders, MORITA Misaki and ITO Sara were positioned in the flanks. YAMAMOTO Yuzuki and OSAWA Haruka were the two forwards named upfront.

After defeating Korea Republic at the semi-finals, DPR Korea carried great momentum into the final, as they showcased great intensity to charge the Japanese goal. However, Japan displayed great ball movements to keep their opponent from possessing the ball. 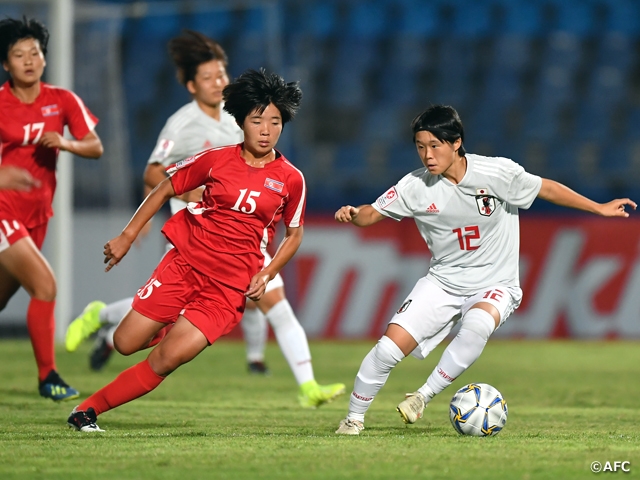 While Ito and Kanno actively took shots from distance, Yamamoto and Osawa created chances through their combination plays, but the team fell short from scoring goals in the first half, as the match entered halftime scoreless.

The opening goal came early in the second half, as Nakao dribbled through the right flank before sending a cross towards the goal. The cross was met by Yamamoto, who scored with her right foot, registering her fifth goal of the tournament and giving Japan the long awaited lead in the 47th minute.

In efforts to level the match, DPR Korea collected the ball to KIM Kyong Yong, who scored a brace at the semi-finals, but Goto and Takahashi showed great coverage to deny the opponents from creating major threats.

With Japan picking up their pace in offence, the second goal was produced from a corner kick in the 72nd minute. The ball delivered by Kanno found Takahashi in the box, allowing the defender to strike a powerful header into the goal, giving Japan a two goal lead. 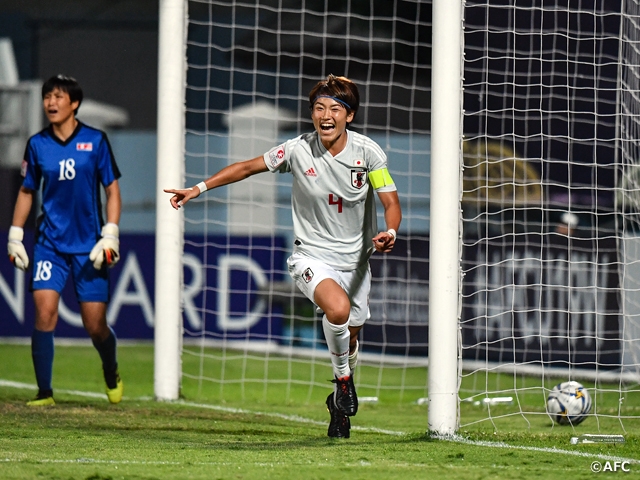 Trailing by two goals, DPR Korea made their final push to get back in the game. Their moment came in the 82nd minute, when the shot taken by CHOE Kum Ok was blocked by Tanaka, but the deflection went off the hands of Takahashi, giving DPR Korea a penalty kick. With KIM Yun Ok calmly converting the spot kick, DPR Korea got within a goal in the closing minutes of the match.

With DPR Korea showing great momentum in the final minutes, Japan struggled to possess the ball, but their goalkeeper Tanaka made spectacular saves to keep their lead intact before hearing the final whistle. With the win, Japan has won their third consecutive and sixth overall AFC U-19 Women's Championship title.

Following the match, Kanno was named as the tournament MVP, while Japan was awarded with the Fair-Play Award. The U-19 Japan Women's National Team will now work towards the FIFA U-20 Women’s World Cup 2020.

IKEDA Futoshi, Coach
This was certainly a tough match, and I am very proud of my players. DPR Korea has shown aggressive pressure from the start, but our players did a great job to evade the pressure and score the opening goal to take control of the match. The players displayed plenty of confidence to stay aggressive and showed great defensive organisation, while mixing combination plays in offence. We hope to make this team a much stronger, faster, and better team ahead of the FIFA U-20 Women’s World Cup 2020.

GK #1 TANAKA Momoko (Yamato Sylphid)
We have been collecting a lot of silver medals at the U-16 and U-17 category, so I am so happy that we were able to win the title. We kept our game plan simple and fought with confidence and composure. It feels like we were able to showcase everything we built up during this tournament. After making my transfer to Yamato Sylphid, I was able to gain more playing time at the Nadeshiko League, and I believe that has allowed me to reach this stage. I will heighten the standards of my daily trainings and strive to become a better player.

DF #4 TAKAHASHI Hana (Urawa Red Diamonds Ladies)
Compared to the other matches we’ve played, this was a tough match in a unique way. We really had to earn it, but it certainly felt great when we won the title. I haven’t been able to convert the chances leading to this match, so it was great that I was able to score from a set-play today. I feel honoured for this opportunity to play at this stage as the team captain, and I am very thankful for my teammates and staffs for all of their support. Great competition against the world’s best teams awaits at the FIFA U-20 Women’s World Cup, so I will continue to give my best efforts to get selected into the squad.

MF #10 KANNO Oto (Nippon TV Beleza)
I feel like we were able to showcase our dedication and persistency at this final. In terms of techniques, I believe that we were able to overwhelm every opponent at this tournament. Although I was named as the tournament MVP, I still felt the need to play more aggressively and get myself involved in our team’s goals. I hope to utilise this experience to become a better player and strive to get selected into the squad for the FIFA U-20 Women’s World Cup, and eventually become a member of the Nadeshiko Japan.