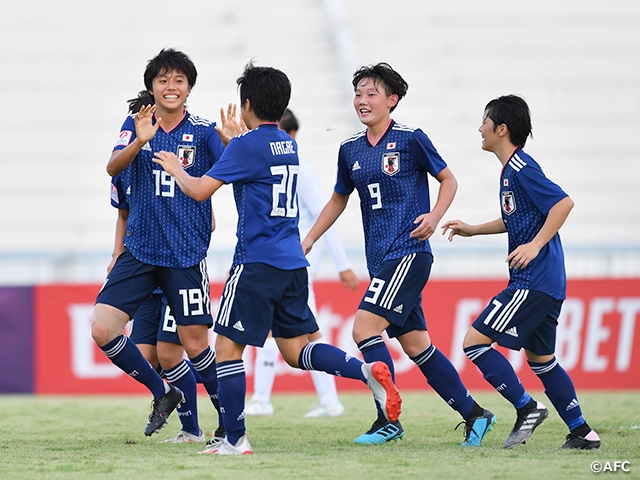 In their first match of the tournament where the top three finishers will earn their tickets to the FIFA U-20 Women’s World Cup Nigeria 2020, coach IKEDA Futoshi started OHBA Shu in goal, with the defence line of NAGAE Ibuki, TAKAHASHI Hana, TABATA Haruna, and MATSUDA Shino. While NAKAO Momo and KANNO Oto played in the defensive midfield role, TAKIZAWA Chise and ITO Sara were placed in the flanks. YAMAMOTO Yuzuki and OSAWA Haruka were the two forwards named upfront. 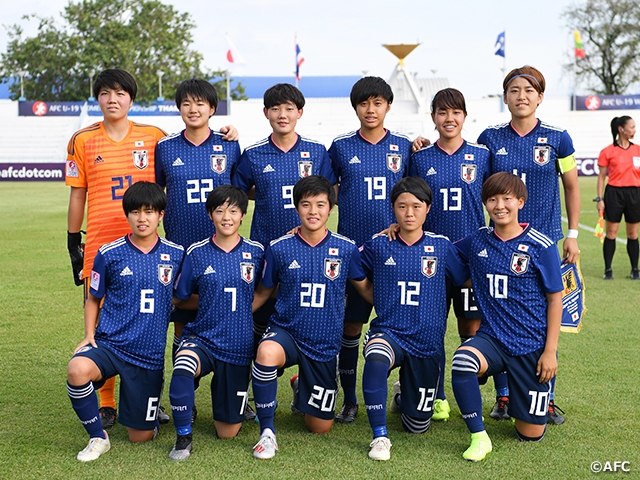 While Japan showed their dominance in ball possession, the team struggled to break through the opposing defence, who kept their line as high as the halfway line of the field. With all of their attempts to exploit the space behind the defence line getting called offside, the Japanese offence couldn’t find their rhythm in the early minutes. However, the keep kept on pressing forward to gradually pick up their pace.

The long-awaited moment for Japan came in the 36th minute, when Nagae broke through the right flank before sending a cross towards the centre, allowing Yamamoto to score the opening goal. Three minutes later, Japan successfully broke away against the opponent’s high defence line, as the long ball delivered by Ito was timed perfectly to assist the goal scored by Osawa.

After entering halftime with a two goal lead, Japan carried their momentum into the second half, as Yamamoto converted the cutback sent by MIURA Haruka to score the team’s third goal in the 49th minute. Second half substitute, HIROSAWA Maho, followed in the 66th minute, when she struck a powerful shot from outside the penalty area to further extend the Japanese lead. A minute later, Ito forced a turnover deep in the opponent’s territory and converted the opportunity to register the team’s fifth goal.

Despite seeing a rare incident where the referee had to be replaced, the Japanese players kept their focus until the final whistle, as the team earned a 5-0 shutout victory in their first match of the tournament. 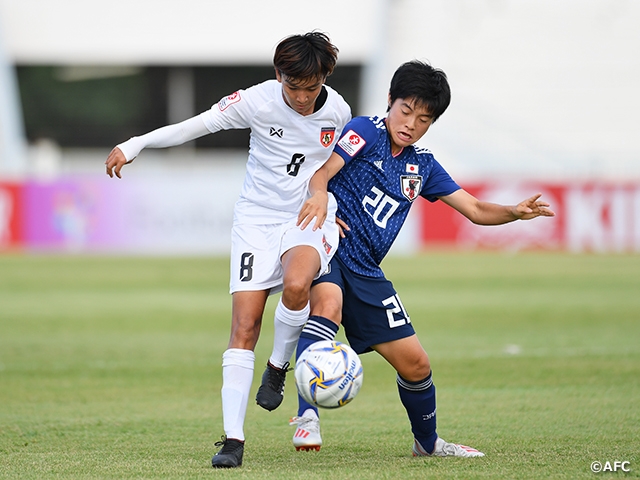 IKEDA Futoshi, Coach
We looked a bit stiff in the early minutes of the match, but as the match progressed, we saw improvements in our overall performance. I am glad that we were able to earn three points from this match. Although we managed to win the match, we still saw plenty of room for improvements, so we must address each aspect to prepare ourselves ahead of our next match against Korea Republic.

GK #21 OHBA Shu (JFA Academy Fukushima)
With this being our first match of the tournament, this was a very important match for us, so we focused on playing aggressively throughout the match. We looked nervous at first and made mistakes early on, but we gradually picked up our pace. It’s great that we managed to win our first match, but we still saw many mistakes that could have cost us the match, so we must make the necessary adjustments ahead of our next match against Korea Republic.

MF #16 MIURA Haruka (Nittaidai FIELDS Yokohama)
We entered this match with the intention to showcase everything we have worked on during our training camp. With this being our first match of the tournament, we were a bit rattled at first, but we managed to find our rhythm as the match progressed. Once we got our momentum going, we were able to create numerous chances and score multiple goals. It was great to see us keep a clean sheet as well. We have only two days ahead of our next match, but we will do our best to prepare ourselves to earn another victory in the next match.

FW #19 YAMAMOTO Yuzuki (Nippon TV Menina)
With this being our first match, we looked nervous and struggled to give our usual performance at first, but as we scored goals, we managed to find our rhythm and really showcase what we have been working on. The first goal was setup perfectly by my teammates, so I just had to tap the ball into the net. We are expecting a tough match against Korea Republic, so we will continue to work hard as a team to earn us another victory.

Top 3 finishers of this tournament will earn spots into the FIFA U-20 Women’s World Cup 2020.