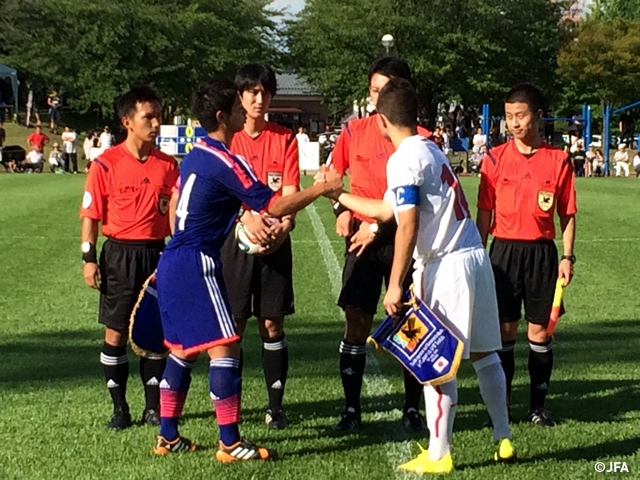 Matsumoto replaced Kojima in goal after he picked up an injury. The same outfield players, who played against the Hokushinetsu Selection Team on 17 July, started the match.

Japan struck the opener. After 13 minutes, Suzuki intercepted the ball near the centre circle and ran forward. Takagi, who reacted well, received a through pass and knocked it calmly into the left-hand corner. Straightaway in the 14th minute, Japan stole the ball on the left wing with a pressing defence and counterattacked. Kato, who was positioning in front of the goal, received the ball and slotted it home, building a two-goal lead. However, Serbia started their fight-back to level the score in the first half. After 30 minutes, Japan lost their previously solid concentration in defence and let Serbia get the ball behind Japan’s defensive line from a Serbia throw-in; facing the goalkeeper one-on-one, they put the ball into the right-hand corner. The first half ended 2-1 to Japan.

Early in the second half, Serbia attacked strongly to try to level the game, but Japan defended strongly. In the 74th minute, Japan scored again. Inoue gave an excellent through-pass from the left wing and Onozawa, who came off the bench, reacted swiftly and slotted the ball into the goal. The score was 3-1. Then in the 76th minute, Suzuki threw a pass behind the opponent’s defensive line again, where Takagi ran onto the ball, chesting it perfectly, and scoring. After 76 minutes, Serbia scored once more by dribbling through the centre. Then in the 87th minute, Ito, who came off the bench, passed the ball to Kobayashi, who also came in midway and ran into the left wing space. Kobayashi dribbled up towards the Serbian goal, facing the goalkeeper alone, and calmly shot into the back of the net. The game finished 5-2. Although Japan conceded two goals, Japan won their first match with a massive lead. 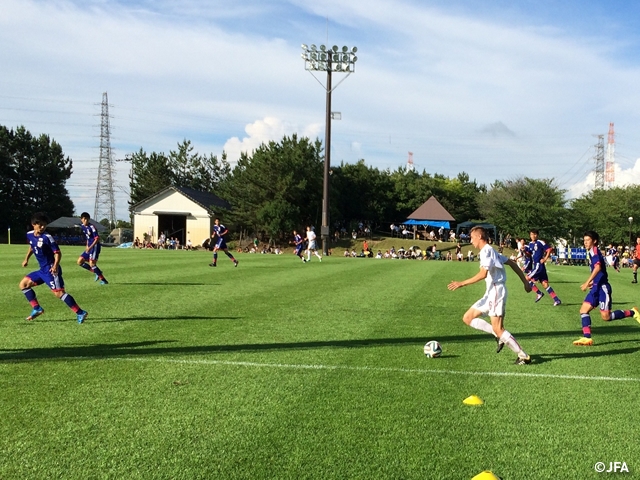 MATSUMOTO Kenta（Kashiwa Reysol U-18）
The championship started today. I was pleased that we scored two goals in the first half. However, exhaustion from the heat, which slowed us down, is an issue that needs to be fixed. In the second half, we scored in good order, but we also had some tough situations from our careless mistakes. We still have many issues as a team and also as individuals. I’d like to fix them during the championship.

NAGANUMA Yoichi（Sanfrecce Hiroshima Youth）
I’m very pleased and grateful that I was chosen as a member of this team. I think we generally controlled the match today. As we scored early, we played well. Personally, I could have done more and there were things to be improved. I’d like to contribute to the team’s victory, fixing those issues as much as I can in the next two matches.

TOMIYASU Takehiro（Avispa Fukuoka U-18）
We had our first competition match against Serbia today. While playing we had in our minds ‘controlling the line precisely and compactly’, which, we discovered in the match against the Hokushinetsu Selection Team, was an issue to be fixed. However, the line could have been better controlled and we let the opponent attack in vital areas or pass the ball behind our defensive line several times. I’d like to control the defensive line even more carefully not to concede any goals tomorrow against the Niigata Selection Team.

TAKAGI Akito（Gamba Osaka Youth）
We won the game 5-2 today. In terms of the attack, we did what we wanted and I scored two goals. However, I think the quality of the shots, the passes and the initial movement must be improved even more. As for the defence, the way we were intercepted was not good, which let us concede goals. So we’d like to improve that as a team. I’d like to show our best performance in the next two games.