In their first match of the tournament, Nadeshiko Japan’s coach TAKAKURA Asako named SEIKE Kiko and KURISHIMA Akari into the starting line-up, handing them their first cap with the senior team. Goalkeeper IKEDA Sakiko was given her first start since August 2018, while IWABUCHI Mana was given the armband to start up top along with this season’s Nadeshiko League MVP, TANAKA Mina.

The match started with the Nadeshiko Japan taking the initiative from the early minutes, as Iwabuchi scored the opening goal in the seventh minute. Tanaka followed in the ninth minute, before KOBAYASHI Rikako made it 3-0 in the 16th minute. Tanaka scored her second goal of the match, when she converted the penalty kick she earned herself in the 38th minute. With MATSUBARA Arisa marking her first goal as a member of the Nadeshiko Japan, Japan entered halftime with a 5-0 lead.

During halftime, coach Takakura made two changes to the line-up, as IKEJIRI Mayu and HAYASHI Honoka were brought onto the pitch to start the second half. Carrying their momentum from the first half, Japan continued with their scoring spree, as Ikejiri scored the team’s fifth goal in the 54th minute, followed by a header scored by Seike in the 66th minute. 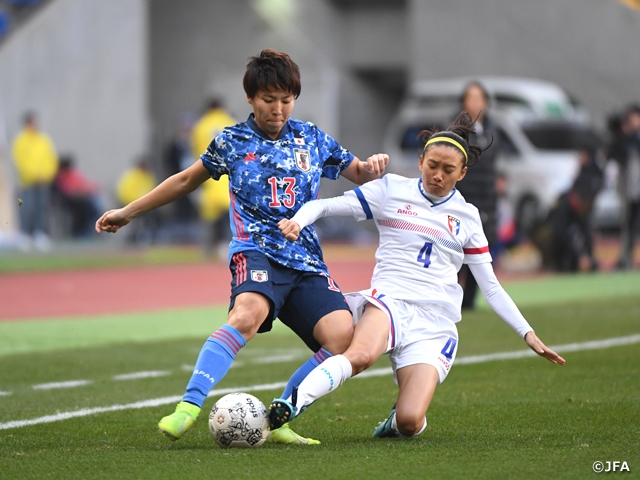 With Iwabuchi and Ikejiri both registering their second goal of the match in the 71st and 92nd minute respectively, the Nadeshiko Japan cruised through the first match with a final score of 9-0.

The Nadeshiko Japan will now face the China PR Women's National Team on Saturday 14 December with a kick-off time of 15:55.

TAKAKURA Asako, Coach of Nadeshiko Japan (Japan Women’s National Team)
After missing out on our opportunity to win the E-1 title two years ago, we are eager to win the title this year, so we are glad that we managed to win this match against Chinese Taipei with a total team effort. The players showed great creativity and cohesiveness to score nine goals today. I feel that many of our players are now fully aware of the team concept, and they are passing down the game plans to the new players. The newly joined players have also displayed their colour and showcased their potential to become a helping force for the team. I will sketch out the starting line-up for the following two matches, so that we can give ourselves the best chance to grow both as a team and as players.

DF #20 MATSUBARA Arisa (Nojima Stella Kanagawa Sagamihara)
While I was playing in the midfield during the first half, I focused on receiving the ball from the ball holder and anticipating to deliver through balls to our forwards. In the second half, I shifted my position to defence, so I focused on winning the fifty-fifty balls and controlling the defence line. My first goal with the national team came from a lucky play, but I was at the right place at the right moment, so that is what’s important. I am glad that I was able to utilise the width of the field to create opportunities in the second half, and I hope to continue with that in our next match.

MF #3 KURISHIMA Akari (Urawa Red Diamonds Ladies)
Although this was my first match with the national team, but I was not so nervous. With the team scoring so many goals, I wanted to score a goal too, but I kept focus on my own job. During the scrimmage we played yesterday, I felt the need for us to add more numbers upfront, so I positioned myself in a higher position than usual. We showed great combinations, especially in the first half, and it was fun to watch. It was great that we won this match, but we must now reset our minds to focus on our next two matches.

FW #8 IWABUCHI Mana (INAC Kobe Leonessa)
I was told by my peers that I might be named captain today, but I thought it was going to be someone else, so I was surprised when I was given the armband. However, I still entered the match just the way I always do. I am relieved that we managed to win the first match, especially with so many new players joining the team. It felt like the goals were scored as a result of us trying to stay on the same page with each other. Although this is a short tournament, we will focus on getting our jobs done and strive to work together as a team.