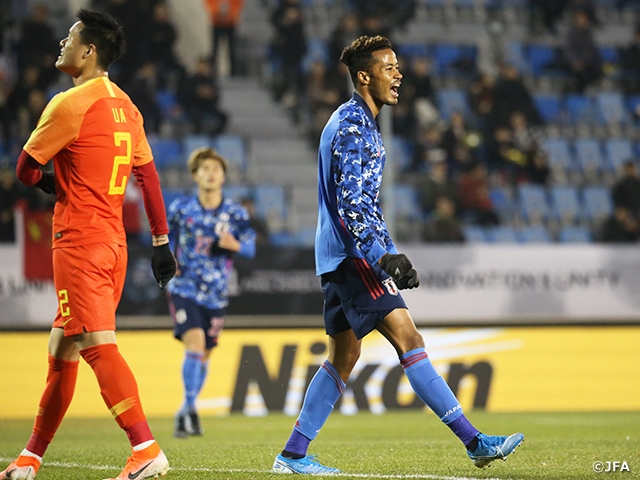 On Tuesday 10 December, the SAMURAI BLUE (Japan National Team) faced the China PR National Team in their first match of the EAFF E-1 Football Championship 2019 held in Busan, Korea Republic, where they claimed a 2-1 victory with the help of goals scored by SUZUKI Musashi (Hokkaido Consadole Sapporo) and MIURA Genta (Gamba Osaka). 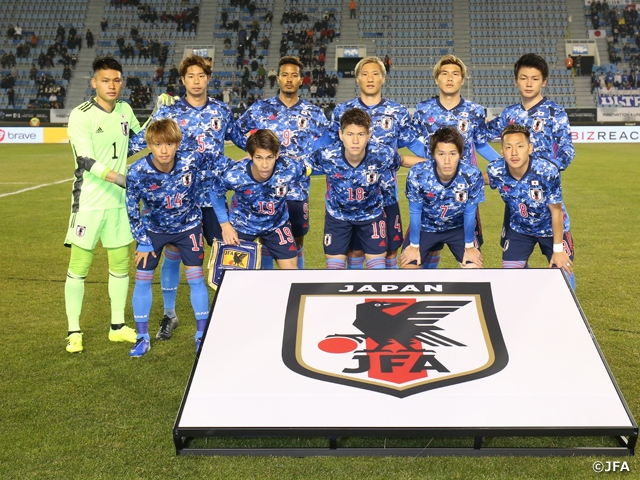 Japan entered the match with a 3-4-2-1 formation, where Miura controlled the defence line, while HASHIMOTO Kento (FC Tokyo) and IDEGUCHI Yosuke (Gamba Osaka) anchored the midfield. Despite only having two days to prepare for the match, the young offence showed lively action to apply pressure from the front line. Although the team showed difficulties to get their combinations down, as coach Moriyasu later revealed, “We didn’t have enough time to hold a proper training session,” the team gradually found their rhythm to get the ball moving and create a positive momentum.

A close opportunity was created in the 17th minute, when Miura responded to a free kick delivered by Ideguchi and flicked the ball towards the far post, where HATANAKA Shinnosuke (Yokohama F・Marinos) struck a shot, but his attempt went off the post. The opening goal came in the 29th minute, when the ball was connected through SASAKI Sho (Sanfrecce Hiroshima), Ueda, and Morishima. The final pass was delivered to Suzuki, who made a run into the box to convert the pass and score his first goal with the senior team. With momentum on their side, Japan continued to increase their dominance as another close chance was created by Morishima, Endo, and Suzuki in the 37th minute, but this time the attempt was denied by the opposing defender.

With coach LI Tie making his managerial debut for the China PR National Team, the two time E-1 champions collected the ball to their strikers DONG Xuesheng and TAN Long to create opportunities, as a close scene was created just before the end of the first half, when Dong struck a header that went just wide of the Japanese goal.

In efforts to level the match, China PR started the second half by showing great intensity in offence. A close opportunity was created in the 54th minute, when Tan responded to a lobbing pass inside the penalty area. As the striker tried to set up a shot for Dong, Miura made a sliding effort to clear the ball, but the loose ball was collected by MING Tian, who came sprinting into the box to fire a powerful shot that struck the cross bar. Despite creating numbers of chances, China PR fell short from scoring the equaliser, and Japan once again started to take control of the ball possession. In the 70th minute, Miura connected with a corner kick delivered by Ideguchi to extend the lead for Japan. For Miura, this was his first goal with the senior team. 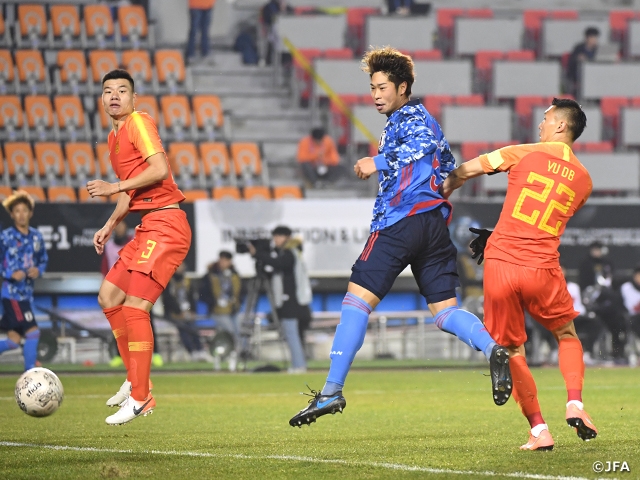 Following this goal, Japan made two substitutions, as TAGAWA Kyosuke (FC Tokyo) and SOMA Yuki (Kashima Antlers) were sent onto the pitch in the 72nd and 84th minute respectively. However, it was China PR who took control of the match in the closing minutes, as they applied more pressure upfront to level the match. Japan’s clean sheet was taken away in the 90th minute, when Dong connected with a cross to get his side within a goal in the final minutes of the match. China PR continued to threaten the Japanese goal during additional team, but the Japanese defence managed to secure their lead, as they won the opening match with a score of 2-1.

With this victory, Japan has extended their undefeated streak against China PR to 10 matches, dating back to the AFC Asian Cup semi-finals in 2000. Japan now holds a record of 13 wins, 7 draws, and 7 losses against China PR.

MORIYASU Hajime, Coach of SAMURAI BLUE (Japan National Team)
Facing a strong team like China PR in the first match of a tournament is always tough, but we were able to walk away with three points, and I am glad that we were able to deliver a victory to our fans and supporters. Despite having almost no time to train as a team, the players showcased a great performance, both mentally and physically, to help the team earn this victory. After going through the system in yesterday’s training session and in today’s meeting, we tested out the three-back formation. Although we have gone with a four-back formation in our past matches, I though it was worth the shot to test out this option, especially with the type of players we have on this current roster. We did see some rough stretches where things didn’t go our way, but the players did well to hang in there and continued to try out the new system. As the match progressed, we saw better combinations from our team which led to the opening goal. We hope to implement this three-back system and make it available as an option. I was planning on making three substitutions, but with the team entering the match with no proper training session, I wanted to see how our team make the adjustments and evolve through the match, so that is why I was hesitant to make the first two changes. After conceding the late goal, I opted out to make the final change and let the team use their combination plays they developed through this match to close out the match.

DF #5 MIURA Genta (Gamba Osaka)
Although we had very limited time to prepare for this match, I am glad that we managed to earn this victory. I kept my focus to control the defence line and to manage the risks. We still have plenty of room for improvements, so we hope to polish our plays through these matches.

MF #18 HASHIMOTO Kento (FC Tokyo)
This was a very tough match for us. Although we struggled in the early minutes of the match, we managed to communicate with each other and make the necessary adjustments on the pitch. China PR showed great intensity to win the ball, so I tried to keep up the pace with them and win the second ball. By evading the pressure from an aggressive opponent, it gives us the opportunity to create huge plays, so that is an aspect we must work on.

FW #9 SUZUKI Musashi (Hokkaido Consadole Sapporo)
As I was making the run, I knew it was a huge chance, so kept my run towards the near side. It was definitely a game intuition I nurtured as a striker. I play the same system in Sapporo, so I was familiar with this formation, regardless of my role as a lone striker or as a false nine. I am glad about this result, but I am not satisfied with just one goal. We still have two more matches, so I will take more shots and score more goals to leave a bigger impression. Despite entering the match with almost zero preparation, we managed to showcase some good combinations, so we hope to heighten the quality of our overall plays.

LI Tie, Coach of China PR National Team
Many of our players were making their national team debut and we were forced to endure the high pressure applied by Japan in the first 20 minutes. Japan is very good at keeping possession of the ball, and our fullback wasn’t able to respond in time when we conceded the first goal. The second goal was a bit unfortunate, but our players fought hard until the very end, and I am grateful for their efforts. I am satisfied with our performance today.