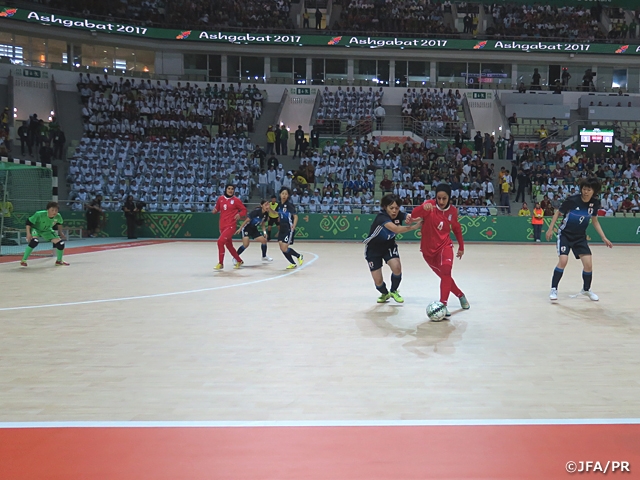 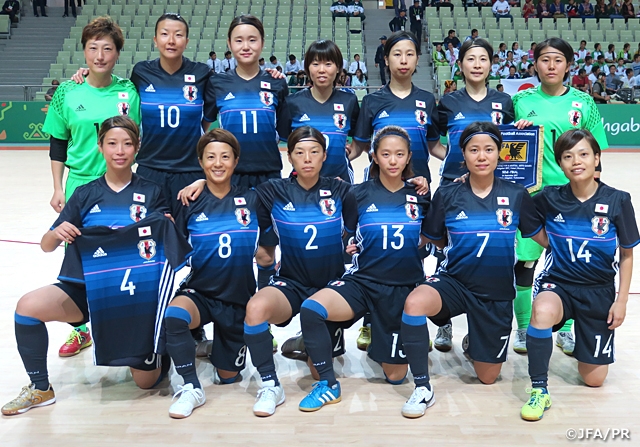 Japan Women's Futsal National Team, who are looking to clinch the title for the fourth consecutive time, faced powerhouse Iran with three-day rest in the semi-finals. Japanese coach ITO Masanori stated prior to the tournament that if Japan were to advance to the final, then the most likely opponents would be Iran. However the Middle Eastern counterparts were defeated 2-0 by Thailand in the group stage and advanced as the second in the group to the knockout phase of the tournament. With this upset, Japan and Iran squared off each other in the semi-final.

Japanese boss instructed his players before sending them to the court, ’Iran have never lost twice in the same tournament. We can make history by beating them today. We shall maintain our composure throughout the game. We are representing Japan and must show our determination. We also have the responsibility to do our best. Let’s showcase to the world our brand of football by playing as one untied team. This is a special day for all of us. We should be grateful that we can play an exciting futsal match wearing the uniform of the Japanese national team. Let’s cherished this moment and enjoy it.’

Japan kicked off with the ball and earned a corner two minutes into game, but could not take advantage of this early chance. First attempt at goal from the Japanese squad came from TAKAO Akari who was named in the starting line-up for the first time in the tournament. One minute later, NAKAJIMA Shiori got through on goal and faced the opposing goalkeeper one-on-one off a counter-attack, but her effort was denied by a fine save.

The deadlock was broken in the 7th minute, when the Japanese side finally found of the Iranian net. SAKATA Mutsumi intercepted the pass in the opponents’ side of the court, and composedly driven her shot between the legs of the opposing goalkeeper to give her side an early lead.

Moments later, Iran’s shot struck the goal post. The Japanese women had no time to rest as the Iranian squad continued to orchestrate threatening attacks capitalising on their excellent individual skills and physicality to take control of the match. Thanks to the brilliant saves from the Japanese goalkeeper YAMAMOTO Ayaka and few missed opportunities from the Middle Eastern side, Japan took a one-goal advantage at halftime.

Japanese coach Ito encouraged his players during the break, ‘We will not fear the challenges on the ball nor shall be beaten in the second half. Have confidence in our defence. We will show the spectators that we have a wonderful team. Let’s entice them with a beautiful game of futsal.’

Iran came out strongly in the second half and created several promising chances inside the Japanese side of the court. However, Japan defended tenaciously and did not allow their opponents to level the match. Then, Ito’s squad doubled the lead off a counter-attack in the 25th minute, when onrushing Sakata collected the ball on right side and her shot was deflected off the opposing defender and into the net.

After 30 minutes, the Iranian squad employed a power play by replacing their goalkeeper with a field player. However, the Japanese internationals worked hard on defending against the power play in training and limited the opponents to only few scoring chances. As Iran continued to display their wonderful futsal skills, they were able to find a player in front of a goal on few occasions after an excellent exchange of passes, but once again Japanese goalkeeper Yamamoto was there to parry away the threatening challenges out of danger and kept the opponents from scoring until the end of the match. Japan secured a 2-0 win over Iran and avenged the loss in the final of the AFC Women’s Futsal Championship from two years ago. 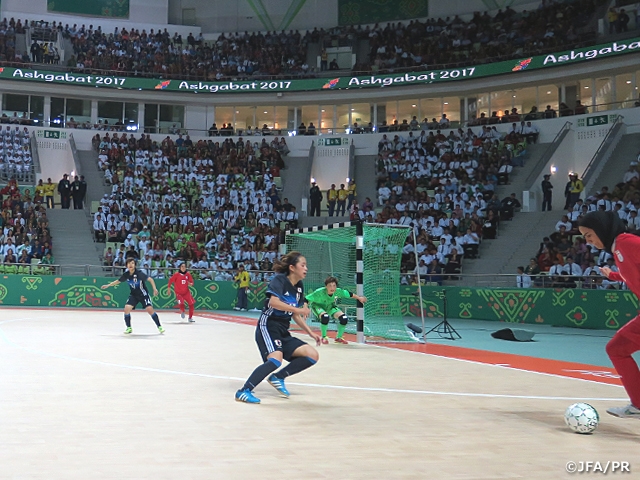 Looking at the statistics of the game, Japan had 22 shots of which 8 were on target, while Iran nearly doubled the number with 39 attempts at goal and 16 of them were on target. Japan futsal team struggled, but yet grabbed an important win to reach the final and return home with at least a silver medal.

Japan Women’s Futsal National Team will face Thailand in the final on Monday 25 and compete for the goal medal against the opponents who have gained momentum after they beat Iran 2-0 in the group stage and won comfortable 4-1 to China in the semi-final.

ITO Masanori, Coach (Japan Women's Futsal National Team)
Players and staff all came together to grab an important win today. We couldn’t have done it missing any one of them. We had tough stretches in the game, but we kept our concentration until the end. It was the same strategically. We overcame adversities with discipline and secured a win by keeping a clean sheet. However, tomorrow’s match is more important than the one we just had today. Our goal is not to beat Iran or reach the final, but to become crowned champions of the tournament. We have our own slogan, ‘This is Japan’. Our aim here is display the wonderful playing style of Japan. Same is true for the final as I hope we put up a great game and entice the spectators.

GK #12 YAMAMOTO Ayaka (SWH Ladies Futsal Club)
We expected that it would be a tough contest and allowed Iran to play on our side of the court for the majority of the game. They had plenty of chances to fire a shot, but we did not concede a goal by keeping our focus and, often of the time, we limited the shooting lane by getting in the line of the shot. I must say that tenacious defending was one of reason why we came up with a 2-0 win as well as capitalising on the limited chances we had. I am glad that we avenged the previous loss in the final of the AFC Women’s Futsal Championship. We will now face Thailand in the final tomorrow. Regardless of the result, this is our final game. We must show our determination and have confidence as well as the pride for playing for the Japanese women’s national team. We are further looking to display what we have been working on in training in addition to what we have learned going through a tough tournament so far. Our goal is to return home with a goal medal. Please send us your continued support for our team.

FP ＃10 NAKAJIMA Shiori (FSF Mostoles/Spain)
I am really happy that Sakata scored two goals for the team. We got beaten by Iran in the AFC Women's Futsal Championship and the 2015 Women’s World Tournament, so I am simply glad that we defeated them this time. We were on back foot for a long time, but we did not allow Iran to score as well. This will bring us some confidence ahead of the final tomorrow. I personally displayed my competitive spirit thinking that I am not going to get beaten in one-on-ones. Our goalkeeper had a lot to do with our win today as she made a number of excellent saves. However, the main reason we came up with a win is that we kept our focus until the end of the match with our relentless competitive spirit which allowed us to run and fight for the ball until the end and defend tenaciously against the threatening side.

We will finally play in the final tomorrow. From the first day of the training camp, our coach stated that our goal is to win this tournament and we certainly need a win tomorrow to attain that goal. With my teammates that I am proud of, I hope we can share the best moment together in the best stage tomorrow. We will have to raise our concentration even higher and give our best in the final. Please send us your continued support for our team.

FP #14 SAKATA Mutsumi (SWH Ladies Futsal Club)
We were defeated 1-0 to Iran in the final of the AFC Women's Futsal Championship two years ago, and I felt responsible for the loss. Since then, I was looking for a chance to avenge that loss and I finally did it today. I wasn’t able to contribute to the team as much as I wished in the three group-stage matches and I felt I owed it to my teammates to perform well today. As for the first goal I scored, my teammate closest to ball put strong on the opponent and I intercepted the weak pass and fired a shot. Looking at the previous video footage of Iran games, if I we were get past the goalkeeper and score a goal, I thought I need to aim high or between her legs. When she came out to challenge me, I ceased the opportunity to nutmeg her and slot it into the back of the net. I am definitely happy that I scored, but it was more important to me that we kept our concentration and fought hard until the end of the match to keep a clean sheet and grab a win at the end.

This is not an end of our journey as we aim to win the tournament. We need to be reminded of our predecessors and the players who could not make it to the national team and win the tournament for the fourth straight time for my team and myself as well. I learned from SNS among others that there were many people who saw us and cheered us watching the live coverage of our matches over the internet. It is a huge mental boost for us. We want to share the moment of winning the final with all of you. Please send us your continued support for our team.