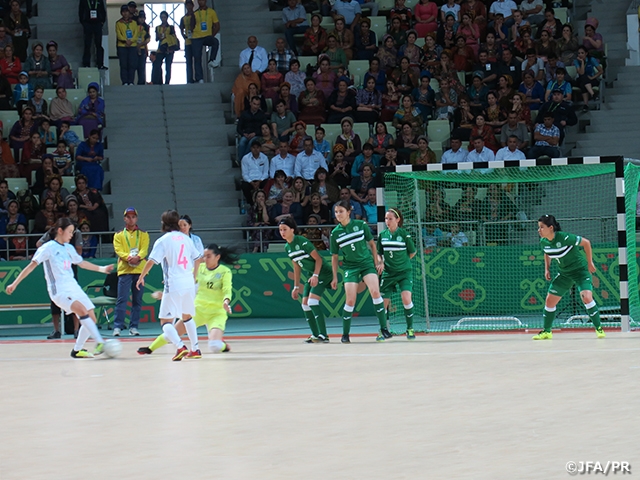 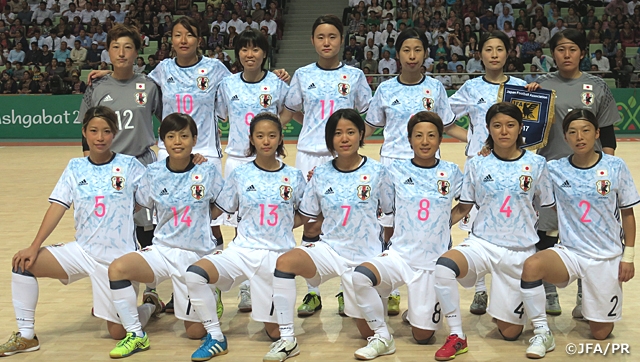 Japan Women's Futsal National Team had their final match of the first round with two days rest against hosts Turkmenistan on Wednesday 20 September after playing back-to-back games from their tournament opener without a day in between. Having won the previous two games, Japan secured a top place of the group, while Turkmenistan lost their first two matches and were already eliminated from the playoff competition. However, as they were the hosting country of the Asian games, the stadium was filled to overflowing with home supporters who came to cheer their team for the one last time.

After arriving to the match site, Japanese coach ITO Masanori advised his players, ‘Remember the importance of playing this game. We will look to score as many goals as possible. I believe that not many players here have experience of playing an away game where there is hardly anyone supporting our side. This is an important occasion to prove ourselves. We will capitalise on our scoring chances and finish the first round on a high note.’

Japan came out strongly from the beginning, as KITAGAWA Kana fired the first shot of the match only 30 seconds into the game, but her effort was denied by the opposing goalkeeper. One minute later, the Japanese squad continued their menacing attacks with a pair of scoring attempts, but both failed to find the target, Additional chance was fashioned in the 5th minute, when SAKURADA Miku struck from the right side, but once again Turkmenistan’s keeper were there to parry it away from danger.

Despite dominating possession of the ball, Japanese side’s woes persisted as they were unable to convert a number of scoring opportunities they had in the opening 10 minutes of play. EGAWA Ryo also had a pair of shots in the 7th and 9th minutes, but lacked the finishing touch to open the scoring for her side.

As the home supporters applauded for the excellent performance put forth by the Turkmenistan squad, there were growing concerns for the Japanese team that the game may not proceed as expected. However, such negative mood was soon gone on 10 minutes, when Japan scored the much-awaited opener. After SEKINADA Minako intercepted the ball, she sent an incisive through pass to Egawa, who finally found the back of the Turkmenistan’s net.

Japan orchestrated several more chances after their first goal, but fine saves by the opposing goalkeeper and few missed scoring attempts kept them from extending the lead until the 16th minute, when Egawa capitlalised on the poor clearance from the keeper to slot home her second goal of the match. Japan took a 2-0 advantage at halftime.

In the second half, Japanese coach Ito brought on goalkeeper MAEHARA Ringo, who made her first appearance in the national team. However, Japan had a difficult first-five minute after the break as they allowed the opponents to attempt a shot at goal. Momentum shifted back to the Japanese side after 26 minutes as TAKAO Akari waiting at the far post smashed home with her right foot a corner-kick delivery from HOTTA Eriko.

In the 31st minute Japan fashioned a wonderful goal from a set piece. FUJITA Mio sent a neat ball to the front of the goal, where Kitagawa feigned a dummy shot to fool the Turkmenistan defence, before squaring a pass to the right. Then, Sakurada scored one of the characteristic goals of futsal from a set play, whereby it enlightened the mood of the entire Japanese squad.

Three minutes later, after stealing the ball from the opponents, Japan hit on a quick counter. Takao surged up the court and into the opponents’ end and found Egawa on the right side. From a tight angle, Egawa struck a dazzling shot into the net and extended the lead to 5-0.

This goal captured the heart of the home crowd and they started to cheer and applaud for the fantastic display of football from the visitors. Now Japan were in full control, and Egawa netted her fourth and sixth goal for the team in the 36th minutes, followed by Kitagawa firing in a free kick directly moments later.

Japan added the eighth from a fine sequence of passes. Sekinada in the centre sent a quick pass to the left flank and TANAKA Chihiro collected the ball and delivered a fine cross to the far side, where SAKATA Mutsumi slotted in the final goal of the game. The Japanese squad responded well to coach’s demand of a high-scoring game and grabbed a stunning 8-0 to end their first round of competition in style. 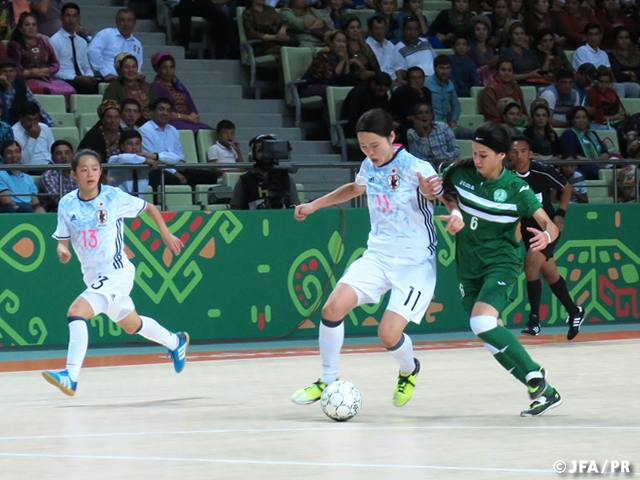 In the semi-final on Sunday 24, Japan will face Iran, who finished second in Group B after losing to Thailand 2-0 in their last match of the first round.

ITO Masanori, Coach
As we expected, the stadium was filled with Turkmenistan’s supporters. It was the environment that gives us a lot of pressure. The match went on beyond my expectation. We struggled with Turkmenistan’s defence in the 1st half. But in the 2nd half the situation changed completely and we scored six goals and grabbed a sweeping 8-0 victory. We managed to finish the final match of the first round in a fantastic mood.

In the 1st half we had a bit of trouble with the tight defence of Turkmenistan. I feel that Turkmenistan’s women football has just started to improve. However, I also felt that they have such a potential that can be a threat to us in a couple of years. Their tight defence and counter-attacks in the 1st half caused us enough difficulty to show their future potential. One of our issues is the accuracy in the last 10 metres of play. There are times that we do not have the accuracy in finishing, and we don’t seem to make the final decisions with courage. Turkmenistan’s defence was consistent for sure, but the issue I have mentioned was also shown in the 1st half.

However, the two goals scored in the 1st half were the ones which tell me how much they have grown up as a team. These goals were scored from transition (switching from defence to offense), which is another issue for us. In futsal, transition is very important since many chances arise from this moment. When executing these plays, the players are required to grasp the situation very quickly, must possess high-individual skills as well as speed, and be fit enough to move around the pitch at full stretch. Those are the aspects that Japanese women’s players should gain. But the two goals scored in the 1st half were made by winning the transition battles, and they were amazing.

In the 2nd half, the players scored another additional goal which showed their improvement and got momentum which created further chances. They scored six goals in the 2nd half alone and that lead us to get this sweeping 8-0 victory. I am satisfied with the players’ performances and I am also deeply impressed by Turkmenistan’s crowd for applauding our good plays.

The next match is the semi-final. We are playing against Iran. We were beaten by Iran in the final of the AFC Women’s Futsal Championship in 2015. This is the chance for us avenge that loss. As a representative of Japan’s futsal teams, we will play with all of what we can do. Please send the players warm words and cheers to encourage them. We are very happy when we find any encouraging words to us on social-networking sites. You are playing alongside us. We are doing our best to get the victory.

GK ＃1 MAEHARA Ringo (Delizia Iwata Ladies)
I was brought on from the 2nd half. This is my first time to be called-up for the national team and this has been my first time to get on the court. Since Turkmenistan were the hosting country, the stadium was filled with excitement. In that mood I could start playing with a good level of tension. It was good that we could keep a clean sheet and I could also show my strengths such as supporting our defenders and playing as a part of our offence. We have won three-consecutive matches from the beginning. It was good that we could go through the first round without any defeats.

FP #5 EGAWA Ryo (Bardral Urayasu Las Bonitas)
First of all, it was good that we could finish the first round without any defeats. Today we played in a completely away environment in which we even could not hear each other due to Turkmenistan’s supporters, and it was a good experience for us. I am very pleased that I scored four goals as well as keeping a clean sheet. The most impressive goal was the third one I scored from a counter-attack. Takao attracted defenders very well so what I had to do was just to take a shot. We have three days to prepare for the semi-final against Iran, so we will prepare ourselves well by working on areas that need to be corrected. We will definitely win the next one and go through to the final.

FP ＃11 KITAGAWA Kana (Maruoka Ruck)
We could win the last match of the first round and we can now move on to the second round. It was a really an away environment. Every time when Turkmenistan got the ball there was loud applause from the crowd. Today I deeply felt that playing an away game is very different. In the 1st half we couldn’t move the ball as we intended and took a while to score the first goal. However, we could stay calm and continued to score one goal after another. We could also score from a free-kick as practised and in the end I can say that we played an excellent match. We will face Iran in the semi-finals. We expected to play against them not in the semi-finals but in the final. Anyway, we have to beat them to win the title, so we will avenge the previous defeat in the final of the AFC Women’s Futsal Championship in 2015. We will definitely advance to the final.