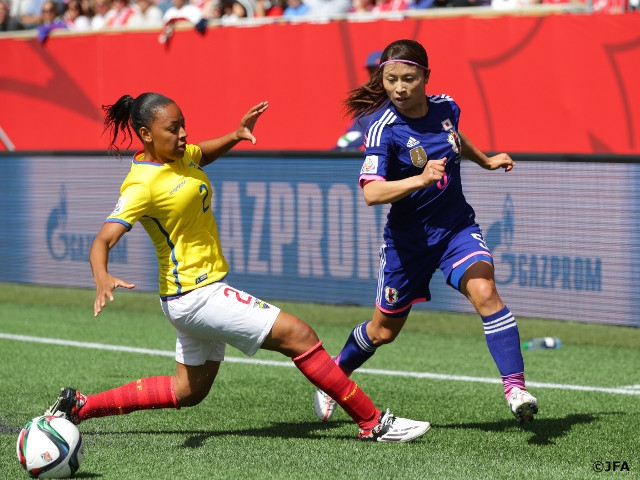 Goalkeeper FUKUMOTO Miho, both the defenders KITAHARA Kana and KAWAMURA Yuri, and midfielder TANAKA Asuna started a game for the first time. Midfielder NAGASATO Asano and the forward IWABUCHI Mana also came off the bench for the first time, which means all the registered players have been on the pitch in the World Cup. The players on the bench brought Ando’s football shirt, which she wore in the first match of the group stage.

Japan kicked off the match and took the initiative from the beginning. Both SAMESHIMA Aya and ARIYOSHI Saori at the sides contributed aggressively in attack, waiting for goal opportunities. After five minutes, SUGASAWA Yuika in front of the goal competed to receive a left cross pass from MIYAMA Aya. Then OGIMI Yuki tapped a loose ball in the goal, striking the opener. OGIMI commented: "I always run to that area focused on scoring. As it was an excellent cross, the loose ball came there." Japan continued to press the opponent from the front to steal the ball.

In the 16th minute, ARIYOSHI got through the penalty area against three defenders to pass the ball in front of the goal. MIYAMA ran towards it and went close with a header, only for it to hit the crossbar. Even though Japan initiated their coordinated attacks using passes, they could not easily find the back of the net.

In the second half, after KAMIONOBE Megumi replaced KITAHARA in the left side, MIYAMA switched from the left side to the defensive midfield and TANAKA from defensive midfielder to the centre back. More players focused on the attack, moving the ball sideways swiftly to press the opponent’s defenders. Yet Japan could not finish their shots. After 64 minutes, the opponent got through the left side, creating a goal-scoring opportunity. KAMIONOBE defended well, using her body.

NAGASATO Asano came off the bench in the 75th minute, and IWABUCHI Mana in the 80th minute, so that they could get through the opponent’s defensive line. After 85 minutes, IWABUCHI initiated an attack by dribbling to pass the ball to OGIMI in front of the goal. IWABUCHI, who received a heel pass back, took a shot, but the goalkeeper saved it. Although Japan could not add any goals before the final whistle, they earned three points, getting through the group stage with three straight win. MIYAMA was chosen again as the Player of the Match, just like in the first and the second games.

In this championship, the top four teams among those who sit in third place in each group, can get through to the round of 16. Nadeshiko Japan will meet either  Netherlands (Group A), Thailand (Group B) or a team from Group F (which will be decided on 17 June). The schedule will be fixed after all the group stage matches finish on 17 June. The day after the game, the team will move to Vancouver, in which the round of 16 will be held, getting ready for the coming match on Tuesday 23 June. 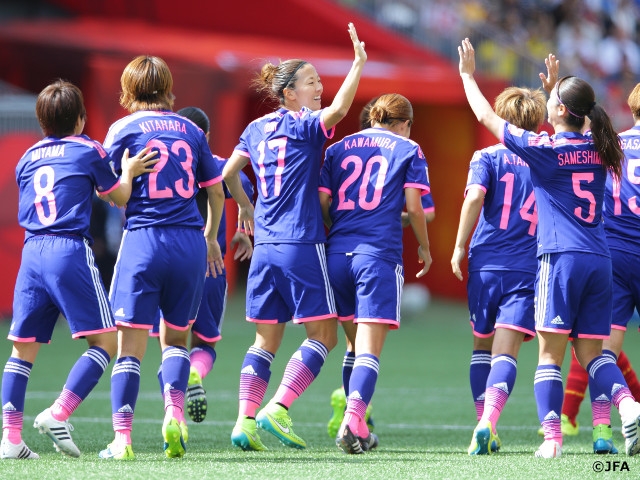 SASAKI Norio, Head Coach (Nadeshiko Japan /Japan Women’s National Team)
As we struck the opener early time of the game, I expected that we’d add some more scores. However, we couldn’t find the back of the net against Ecuador, who have improved themselves through each game. Having said that, we could initiate and create our attacking, which lead us to the next step. It was also very productive that every player now has been on the pitch of the World Cup.

I feel the quality of the team as well as the individual players of each country has improved more that I thought. I don’t expect too many games, in which we can easily take the initiative. It’s vital to stay patient, one of our strengths and not to miss our limited goal-scoring opportunities. With one week to go before the round of 16, we’d like to get ourselves ready to show our playing style.

Vanessa ARAUZ, Head Coach (Ecuador Women's National Team)
Although we lost our first and second matches heavily, I hope we could prove in today’s match why we came to this championship. As a team, who got through the qualifying round in South America, Ecuador has maintained its honor. I bet many people expected Japan to score 15 goals, after Cameroon struck six goals and Switzerland 10 goals.

We stayed aggressive until the last whistle. Japan’s passes, movements, and tactics, not to mention their skills, were all excellent. I do wish Japan good luck to become back-to-back champions. I’m proud of playing against them. Our experience in the championship will help improve women’s football in Ecuador. 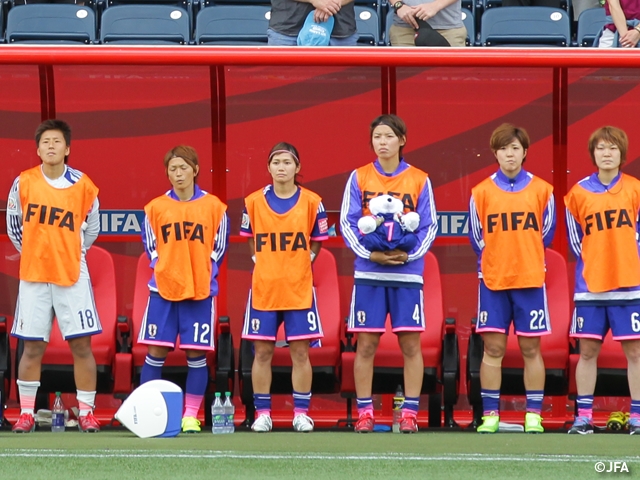