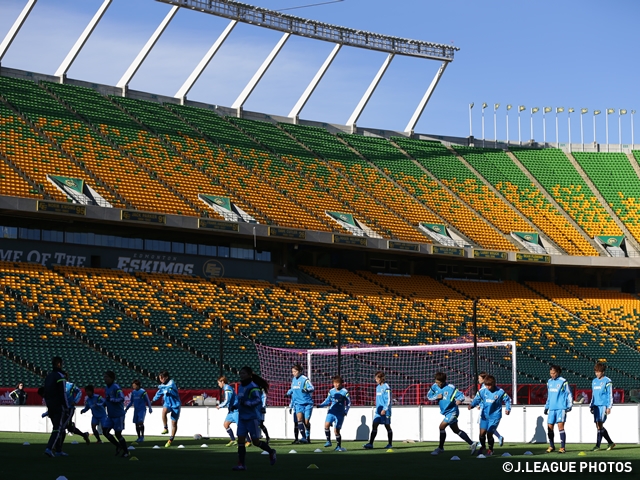 One day to go before international friendly match against Canada Women’s national team, Nadeshiko Japan conducted official training for one hour and half at Commonwealth Stadium in Edmonton. Fifteen minutes of the beginning was not disclosed, they made final tune-up for set-piece and game-format training.
Edmonton is the city in which 10 games including 3rd place playoff, semi-final are scheduled for FIFA Women’s World Cup next year. Gusting wind sometimes blows on the ground but “I want to prepare for the match tomorrow taking wind into considerations.” told head coach Sasaki. About the venue, Miyama said “There are certain artificial turfs where it is hard to move the ball but this is not the case here.”

Some players were called up after long time, “Overseas ladies have a speed and that makes it hard to connect in a good sense but I hope to adjust to it in short time.” said Sakaguchi. Every player is spending a lot of time on and off the pitch talking to each other to make an adjustment of a sense of playing.

SASAKI Norio, Head Coach
As the game will be in the venue of the World Cup next year, this will be the match for getting ready for the World Cup including environment. I had called up various players and built experience since London Olympic. I am going to give all the 21 players a chance to play on the pitch. Quality of our squad is not up to speed 100% yet, I am going to check it out and how much we can do against powerful Canada and how each player can demonstrate their strength understanding the concept. I would say the players are holding training in pretty good condition.

MIYAMA Aya (Okayama Yunogo Belle)
I’m really pleased to have an opportunity to play against Canada Women’s National Team, hosting country at this time. Canada is the team with long ball and physical strength. I want to keep compact lines of DF, MF, and FW for not giving space to Sinclair and take control of the game. With changes in play style of each player of Nadeshiko Japan, it is getting hard to show our concept from first day of Nadeshiko Japan camp; we got to have common understanding of intention and selecting what to play next. I don’t think we are not ready for the World Cup yet but we will do our best and improve our level as much as we can.

OGIMI Yuki (Chelsea Ladies Football Club/England)
The atmosphere is getting better little by little. Not having met for a long time, I am trying to talk proactively to team mates. Most important thing is defense portion, I want to have a common understanding with all 11 members on the pitch where to intercept the ball by interaction and linking each other. About attack, I want to play to find something new in addition to what we’ve been doing. I hope to demonstrate the combination play we’ve been doing in three day training in upcoming game tomorrow. I want to play the football to which Canada dislikes, the team using a lot of long ball, forward pass with physical strength.

IWABUCHI Mana (FC Bayern Munich/Germany)
I was transferred to a new team this season and the level is different. I have been playing in a good condition and really enjoying it. No matter which team I belong to, it is important to show my strength of quick move and turn and dribble. I know I have to prove myself for the World Cup and check to see the interactions of 11 players which is only we can do this time as the occasion of team training is limited. First of all I have to be called up by Nadeshiko Japan and I want to play to help the team. 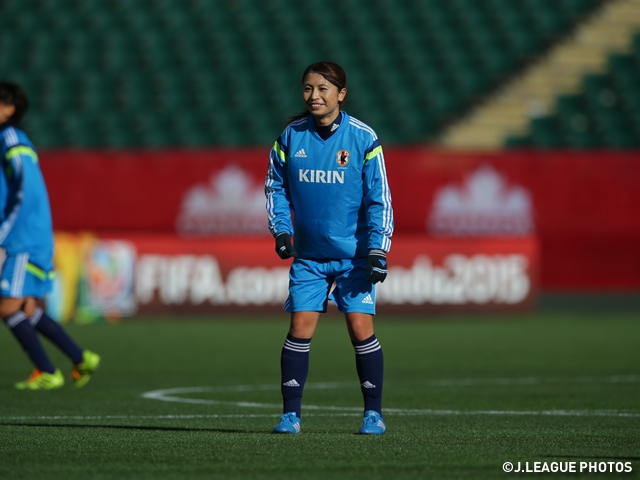