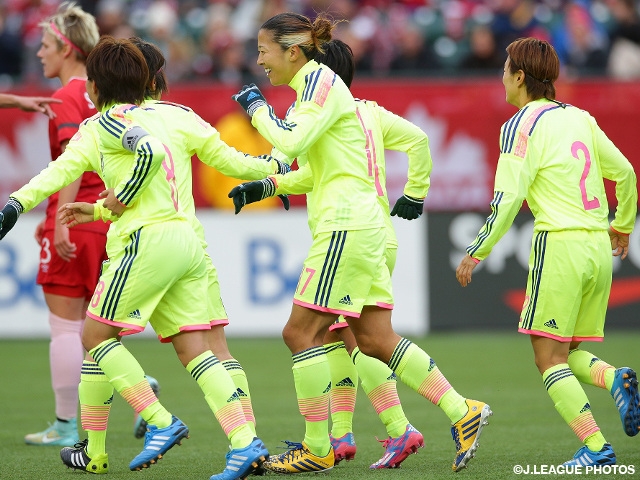 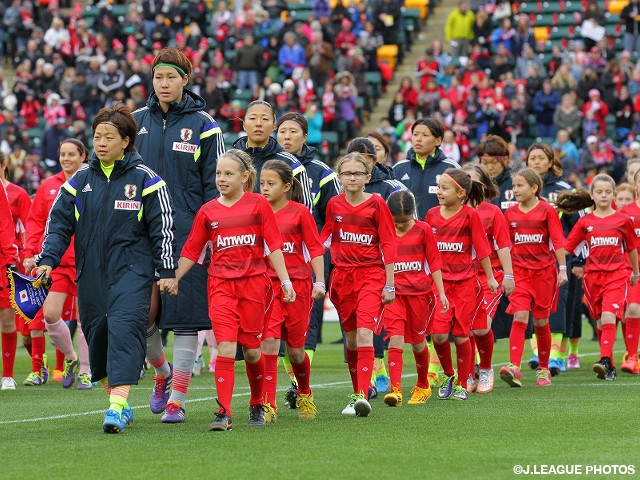 Japan moved the ball with good tempo from early. On ninth minute, Ogimi connected a feed that was relayed from Ando to Ohno for the first goal of the game. Yet after that, Canada gradually created their own rhythm by capitalizing on their physical strength and plays with lateral speed.
On 26th, Canada launched a cross from the right side and Tancredi threatened the Japan goal with a header. On 44th, Ando and Miyama relayed short passes and then Samejima fired a shot, but it went above the bars. The game entered halftime with Japan up 1-0.
During halftime, Japan head coach Sasaki told his players, ``Let’s use more side chances and one-touch passes’’ before he sent them back onto the pitch.
Ando took a shot on 69th yet it barely missed the goal mouth. But in the following minute, Kawamura connected a corner kick for her first-ever goal on the national team. On 71st, Ariyoshi substituted Samejima.
On 80th minute, Ariyoshi, now playing as the left side back, launched a cross and Kawasumi, who was running from the far side, fired a shot with it for Japan’s third goal.

The game was played in front of a crowd of 9,654. ``This is an excellent stadium. As we got to experience playing here, our players earned some courage,’’ Sasaki said of Edmonton, which will be one of the sites for next year’s FIFA Women’s World Cup. Japan will play against Canada for another game, now at Vancouver. The match will kick off at 7 p.m. on Tuesday (11 a.m. on Wednesday in the Japan time). 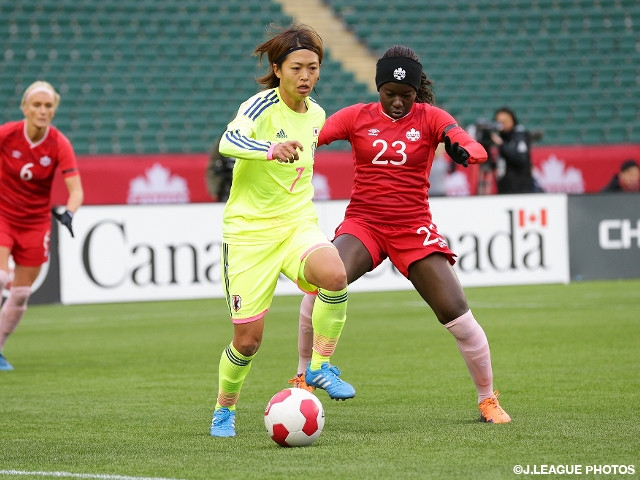 SASAKI Norio, Head Coach(Nadeshiko Japan)
We were able to score the first goal in an ideal fashion, but it may have been a different game had we allowed a header from a cross from the right side to Canada in the first half. We have many members who are here after a while of absence, but they’d experienced the World Cup and London Olympics, they maintained their rhythm until the end.
We gave the opponents their time after our first goal, and that was because we didn't have enough qualities in supporting other players when we were moving the ball, the lines between our defenders, midfielders and forwards weren’t compact enough and we still lacked composure in adjusting. We are satisfied with the result, but it would've been even better had we cut their offensive motivation in those times.
The players who came off the bench today have shown as good plays in our intrasquad games. It’s one of our themes to see various different players on this trip, so we are planning to enter the second game with different members. We are looking forward to it.

MIYAMA Aya (Okayama Yunogo Belle)
In the first half, we were trying to have mutual understanding between our players in terms of how to create outnumbering situations.
It was great that we scored a couple of goals from the sides, but at the same time, we had longer time that we had to focus on our defence, so we will need to elaborate our game more. On our set plays, if we had more imagination, I think we can score even more. As to our mid-field combinations, that Sakaguchi could come up front with good timing was good.

KAWAMURA Yuri(Vegalta Sendai Ladies)
(On the scoring scene) I'd confirmed that the ball would come to the far side, so it's a great feeling that I could make a contact with it. Defensively, we had some moments in our intrasquad games that we didn't have proper distances between ourselves, and I intentionally tried to kick the ball away quickly. We had good combination defensively and it was great to rob the ball throughout the game. Canada's Sinclair was physically strong and it made me think I had to grow more.

OGIMI Yuki (Chelsea Ladies Football Club/England)
Every member kept her focus from the first half until the end. We had the right spots to get the ball, setting our line high as we'd planned, and that led to our scoring. We have yet to be on the same page perfectly and will need to elaborate things, but we would certainly like to bring it back to correct.

SAKAGUCHI Mizuho（Nippon Television Beleza）
Although there were some difficult times in the game but I am glad we won the game 3-0. After scoring goal, there were occasions to get counter-attack, which is action point to check how many defense players should be on alert when attacking. Personally I managed to stop the other side’s attack point by intercepting the ball but it would have been much better if I could receive the pass from defence line and shoot more times.
I am not fully satisfied with the way we played but it is meaningful to win the game and have a feel of stadium and artificial turf and so on.

KAWASUMI Nahomi (INAC Kobe)
About third goal, I could score the goal thanks to my teammate broke down the left flank and Ohgimi attracted defense players in the near post. This is what we were aiming to do and I really appreciate it.
We could score the opener in early time of the game but we should have moved the ball more because we stopped doing that following the opening goal.
I am not hesitated play on artificial turf because I used to play. The type of artificial turf is different from that of in Japan and it is not hard to play on this pitch but I was glad to get a feel of it. 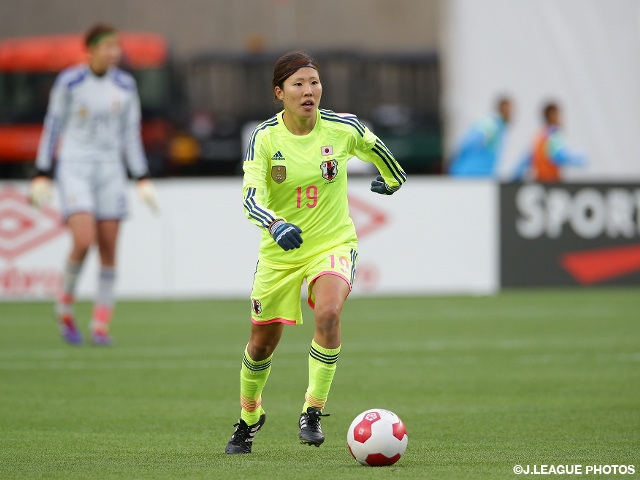