In April, 2010 Sakai City opened “Sakai City Football National Training Centre (Nicknamed as J-GREEN Sakai)” with the following vision: As well as promoting football and other sports recreation activities among citizens and assisting them to maintain and improve their physical and mental health, building the sports hub facility in Sakai and inviting national team training camps and national tournaments communicates the city brand of “Sports Town Sakai” both domestically and internationally.

In addition, the city of Sakai and the Osaka Football Association added accommodation capability to the facility within its premise to strengthen its function as the base of sports cultural exchange and further improve convenience. The new dormitory was named “DREAMCAMP” and opened in April, 2012. JFA Academy Sakai uses a part of the facility as its academy dormitory.

Considering the fact that the JFA had embodied its philosophy of youth development by implementing JFA Academy Fukushima and JFA Academy Kumamoto Uki based on the JFA’s missions and visions included in the “JFA 2005 Declaration” and that it would help the development of local sports activities in various ways, Sakai City and the Osaka Football Association agreed with the JFA’s plan of starting JFA Academy Sakai and the future continuous partnership.

It is significant that JFA Academy Sakai keeps its operation not only for developing talented football players to represent Japan, but also working as a platform to materialise one of the visions documented in the Sakai City’s “Sakai City Master Plan”, which is enhancing educational environment that nurtures human resources capable of pioneering future. 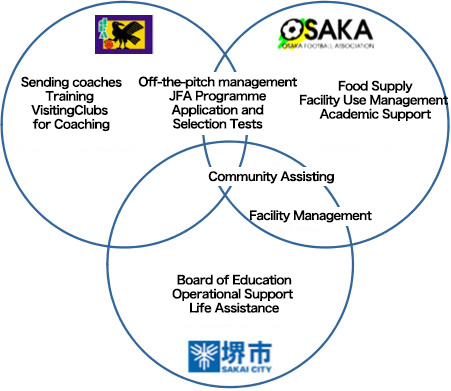