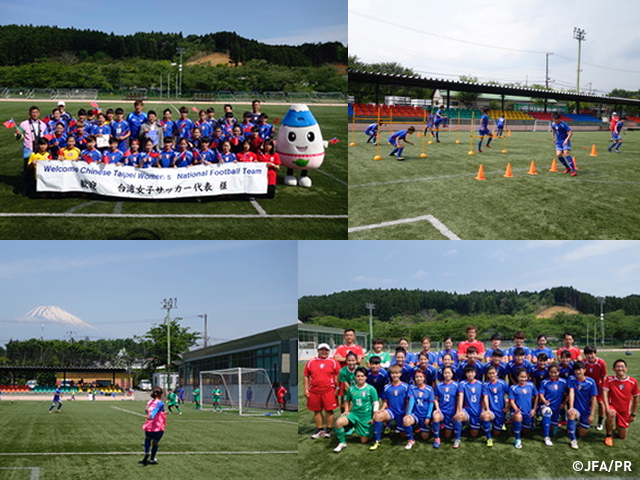 Chinese Taipei Women’s National Team, currently managed and coached by overseas dispatch of Official JFA Licensed Coaches NAGIRA Masayuki (Head Coach) and SUZUKI Daichi, (GK Coach), held a training camp from Tuesday 9 to Monday 22 May in Gotenba, Shizuoka. Their camp at Gotenba during this time of the season was for the fourth time in four straight years. During their stay, the team had nine training matches.

The match results are as follows.

NAGIRA Masayuki, Head Coach
This is our fourth year ever since we started to hold an annual training camp in Tokinosumika, Gotenba. We received a warm welcome from the staff of Tokinosumika camp and local sports centre and Gotemba City personnel. Thanks to their support, we were able to have a very fruitful training camp again this year. Our primary objective of this camp is to strengthen our team before the Taipei Summer Universiade which will be held in Taiwan this August. By having training matches with Nadeshiko League Division 1 and Japan National Universiade Women's Selection Teams, we were able to figure out our strengths and weaknesses as well as the issues we need to work on. New players were tested as well, and I believe we have added depth to our squad. We further recognised the difference in the level of football between the Japanese teams and us, and they were far superior in fundamental techniques as well as off-the-ball movements. I will take this experience back in Taipei and share it with my players as well.

Pan Shin-Yu
We had nine training matches during the camp, but I wasn’t able to play in all of the matches. However, I was given a precious opportunity despite being limited to last 30 minutes of play in some games. During the matches against Nadeshiko League Division 1 Teams, we were able to observe their wonderful performance nearby. In Taiwan, we don’t have a chance to experience this high level of football. I learned a lot just by watching their play from the bench. I know we cannot improve our skills or absorb their moves in a short period of time, but we still want to make progress little by little.

HSU YI-YUN
There were many competitive matches scheduled during this camp and, despite the difference in the level of football of our opponents, every player understood the role in their respective squad and shared the same ideas and thoughts with other teammates on the pitch. Furthermore, even faced with an opponent right in front of them, they kept the ball at a distance where they could control it well at all times and composedly made their decisions. We learned a lot from playing these matches and realised that we need to work hard and improve many areas as well.

LO SHU-YUN
In the training matches, I felt the difference in the level of football between the high-quality Japanese players and myself. Thus, I couldn’t perform as well I wished in these matches. However, experiencing these high-level games and practicing in a wonderful environment allowed us to learn a lot at the same time improve ourselves as footballers. We will keep up the hard work to attain good results at the Taipei Universiade this August.