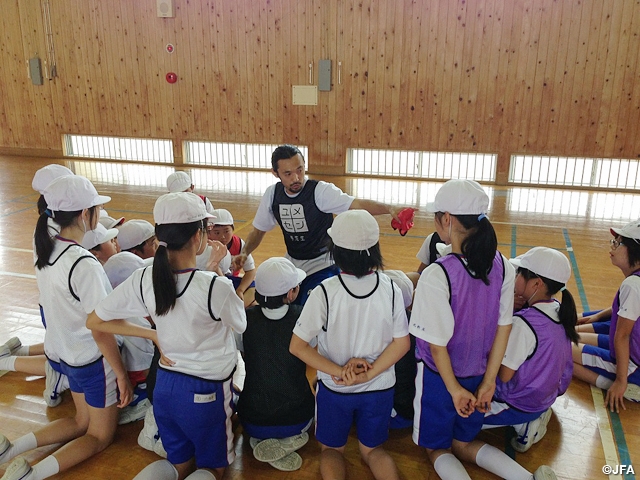 On JFA Kokoro Project, a total of 95 “Dream Classes” were held by 15 local governments in 14 prefectures during May, 2014.
In addition, Japan Sports Association, Japanese Olympic Committee, and Japan Top League Alliance offer “Smile Sports Class” on “Kokoro Project: Reconstruction Support after Great East Japan Earthquake.” The activities for 2014 started on 27 May. In May, the class was held six times by 5 local governments in three prefectures. 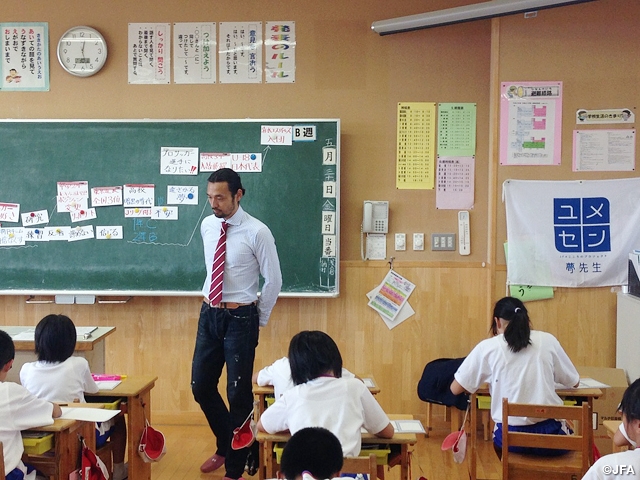 Dream Teacher (at Kitashinjo Elementary School in Echizen, Fukui on 30 May, 2014)

TODA Kazuyuki
I had a very fun time seeing kids’ honest expressions. I talked to them with the hope that I could give them some pointers for their future. I felt how difficult it was to “communicate” my message, and I learned a lot.

Class Teacher for the Fifth-year Class at Kitashinjo Elementary School in Echizen, Fukui

KASASHIMA Misako
The class started with showing kids a DVD describing Mr. Toda’s playing days, and their eyes had been lighted up from start to finish. Some kids who are listless in everyday class were listening to Mr. Toda seriously, and I was impressed by their attitude. During the talk, he was saying that “I never gave up and continued practicing even in a dark period when I lost my confidence.” It seems that thismade a memorable impression on kids. They gave us feedback, and one was saying “I want to devote my energy to what I like without giving up.” Another one was saying that “I was able to gain confidence.” We were able to rethink that we can make a leap because there is a period we endure tough time. Kids tend to avoid things they don’t like and things that are difficult when such things are troublesome and make them feel tired. However, from now on, I will remind them of the talk by Mr. Toda and let them try various things with utmost effort. Thank you very much for coming today.