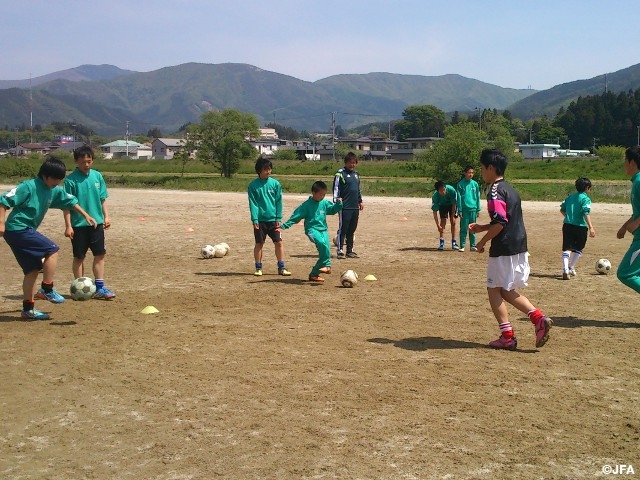 Teguramori Hiroshi paid a visit to Ryouri elementary school in Ryouri, Ofunato City to install goalposts on Friday 23 May and Saturday 24 May. He reviewed Ofunato Sun Altus’s practice after visiting the ground at the school on the first day, and joined the Ofunato junior high school football club training session on the second day. 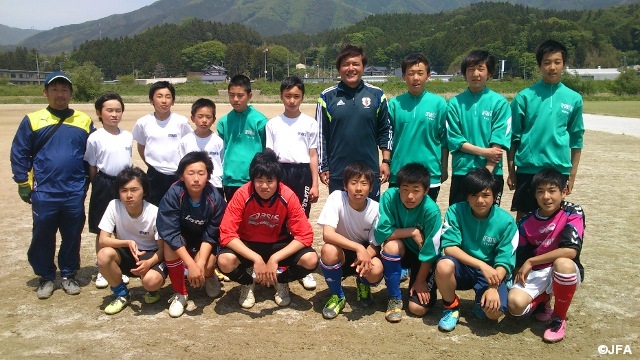 TEGURAMORI Hroshi, National Training Centre Coach in charge of JFA Reconstruction Support Project
Ryouri elementary school is in the tsunami-affected area. The playing fields of this school had become available for use again last year. There’s not enough space for a children’s pitch, but it’s very useful with the night game facilities. It is used for practice sessions by Ofunato Sanriku FC, as well as by Ofunato Sun Altus and Ofunato junior high school. I watched these last two teams training during my visit. The gymnasium in the elementary school is also available when it rains.
It takes about 15 – 20 minutes by car from Ofunato station, so children need a lift to get there.
Since the end of May, this riverbed ground will be out of use for a while due to the newly laid turf.
Ofunato Sun Altus and Ofunato junior high school have difficulties in finding a place to hold practice sessions.
Although the junior high school students can use the ground of Ofunato elementary school on Thursdays, usually they have to practice on the asphalt. Their own ground is still used for temporary houses after the earthquake. As I reported before, it is said that the physical fitness of junior high school students here is lower than the average, because there isn’t enough space to exercise. The earthquake disaster might have now caused insufficient exercise and possible obesity.

TABATA Shuya, advisor (Ofunato junior high school football club)
Thanks to the support from around the country, last year we could purchase goal nets, balls, bibs and maintenance equipment, such as water drainage. We really appreciate being able to play football with all the help, and find ways to practice hard every day even if we don’t have a pitch. Under the clear sky, the pupils were listening intently to Mr. Teguramori’s lesson. As they can’t usually use a clay surface, they haven’t practiced basic skills enough unfortunately. But during the training session, they could concentrate on communicating and passing with time and care.
Owing to Mr Teguramori’s careful coaching, I could see a positive effect on the student’s skills as well as on their minds in a short period. We will continue the same training.
We are very grateful to Mr. Teguramori for coming and coaching our team at such a short notice.

NIINUMA Katsuhisa, coach (Ofunato junior high school football club)
Ofunato junior high school is located on a hill, with a view of Ofunato bay.
Although the school was able to escape the tsunami, we lost our practice field, as temporary houses needed the space.
It’s been three years since the disaster. We’re still struggling to get our own playing field with issues over location and there is no official compromise proposal whatsoever yet. We’re still waiting for the solution to present itself.
We have no clear idea about how or when those temporary houses will be removed. This makes our school very different from other schools nearby.

Many pupils, who belong to the baseball club, the tennis club, the football club and the track club, have to use a small asphalt space around the school building for their practice. We are sharing this limited space, using it in turn every day.
Under these circumstances, we’ve been trying to travel to enter competitions or hold practice matches with other teams as much as possible over weekends.
We played a lot in the Reconstruction Support Competitions in Hachimantai City, Mizusawa City and Ichinoseki City, thanks to their help.
In the school, teachers as well as the headmaster support our club activities. Also the support from pupils’ guardians encourages us.

If I could ask for one thing, I’d like to have a practice field, holding shooting practice and letting my pupils kick the ball every day, as much as they want!
Last year the third grade students graduated from the school without practicing a single session on their own ground. They were so talented, and were placed in the top eight in the prefectural freshmen’s championship.
The current third grade pupils are yet to use their own playing field as well.
Had they practiced on the proper ground every day, without doubt they’d have been much better.
I don’t want to have any more children suffering from this problem. 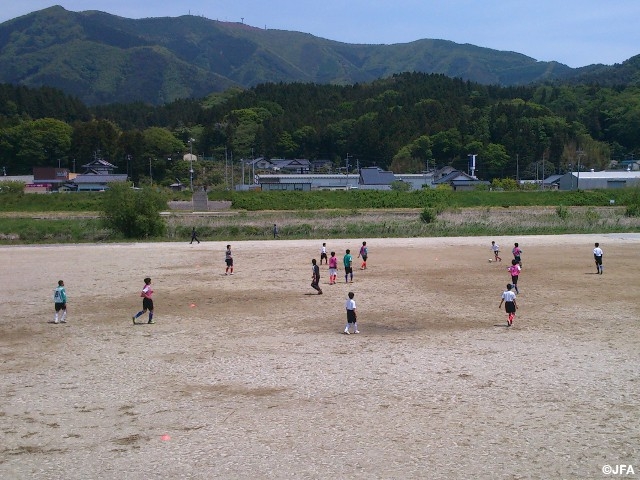