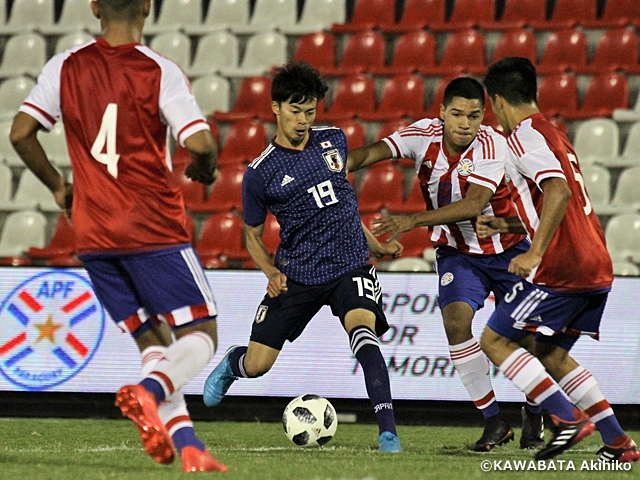 On Sunday 25 March, U-21 Japan National Team played U-21 Paraguay National Team in a football exchange tournament held in part of the SPORT FOR TOMORROW (SFT) programme supported by the Japanese government. In their third match held in Asunción, the capital of Paraguay, Japan lost the game 2-1, finishing the tournament in fourth place among four teams.

Heading into their last match against the host team, Coach MORIYASU Hajime commented, “we want to showcase a great match.” Paraguay, on the other hand, were keen to grab their first victory in the competition. Both teams went into the match with high motivation and the match opened with great intensity shown by the two teams. Japan pressed up the field with their possession game led by midfielder SAKAI Daisuke, while utilising wingbacks HATSUSE Ryo and SUGA Daiki to create threats against the host nation. However, with plenty of players in the centre, Paraguay showed tenacious plays to keep the Japanese side away from the penalty area. Besides the effort shown by Hatsuse off a free kick in the 17th minute, Japan could not create any gaol scoring opportunities.

Paraguay also struggled to create chances, but the South American side earned a penalty kick from Suga’s foul in the 30th minute. MATHIAS ESPINOZA calmly converted the opportunity to give his side the lead. Just five minutes later, SEBASTIAN FERREIRA controlled the ball brilliantly before striking a powerful shot from mid-range, to extend their lead to two goals. Following their second match, Coach Moriyasu had pointed out that his team must show more resilience after conceding a goal, as the opposing side gains more momentum. However, the team once again incurred further burden in stretches where Hatsuse later described as “a stretch we had to endure.” 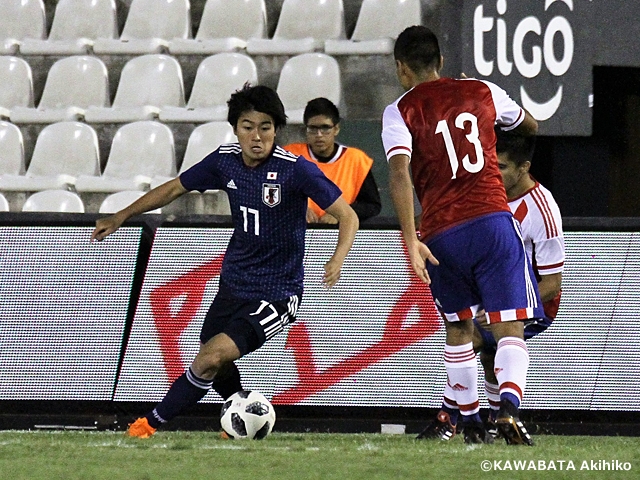 Early in the second half, Paraguayan defender MIGUEL BENITEZ was sent off due to a dangerous play in the 49th minute, giving Japan a numerical advantage. With the two goal lead, this gave Paraguay a perfect reason to park the bus and focus on defence for the remainder of the match. As a result Japan would go onto take control of the match for the next 40 minutes. Chances were created by the Japanese side as defender NAKAYAMA Yuta’s long-rang effort struck the cross bar In the 50th minute, but with the Paraguyan side loading up in the penalty area, Japan struggled to convert their chances. Japan sent out forward MAEDA Daizen onto the pitch in the 61st minute, changing their system from their original three-back formation to a four-back formation. NAKAYAMA was moved up to the midfield to take on a more offensive role.

With the team pressing hard in the attacking third, Japan allowed the opposing side to create critical chances from counter-attacks, as goalkeeper KOJIMA Ryosuke showed a superb save in the 69th minute to keep them within two goals from the host team. But Japan took the risk to continue its attacks, leading to MIYOSHI Koji’s brilliant goal in the 78th minute. HATSUSE repeatedly broke through the left flank to deliver crosses to create numerous opportunities, but Japan failed to level the match against the Paraguayan defence that were determined to keep their lead with one less player. The score stayed the same, and Japan lost the match 2-1. 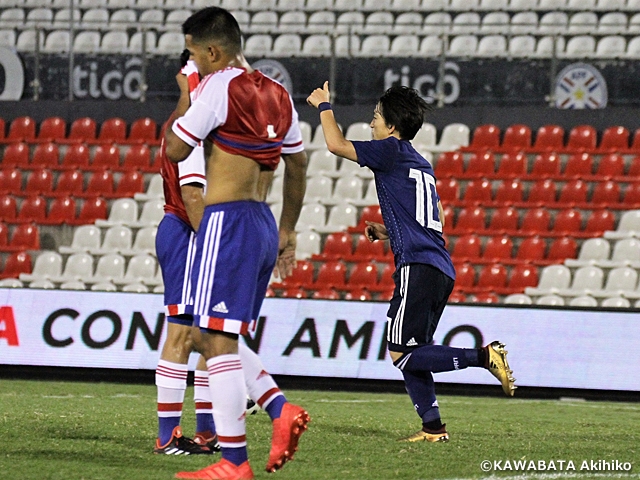 Coach Moriyasu reflected on the tournament in which the Japanese side struggled against the tough South American teams, “the South American players were technically sound, but more than anything, they were strong. If we make mistakes, they will make us pay for it. It was like that in our match today, and our previous matches. We must gain more competitiveness.” But he remained positive, stating that there’s a first time for everything and that they have “gained great experience” through the tournament. Capping off his interview by mentioning that his team will feed off this experience and get stronger.

After all matches were played, the undefeated U-21 Chile National Team won the title with three wins. U-21 Japan National Team finished fourth with a win (in PK) and two loses.

MORIYASU Hajime, Coach (U-21 Japan National Team)
In terms of the technical aspects, I believe we have put up a good fight against the strong teams from South America. The players did what they were supposed to do. However, must create more goal-scoring opportunities and threaten the opponents. We lacked in accuracy in front of the goal. It reconfirmed the fact that we must improve our quality near the penalty area. From now on I will make more efforts to mentally challenge the players.

MF #6 HATSUSE Ryo (Gamba Osaka)
It was a good thing that I was constantly able to display my abilities starting from the first match, but overall we left many regrets throughout the tournament. And I think that is our biggest weakness as a team. It was evident in the first match and the second match as well. Even if we can possess the ball well, if we can’t win, we can’t say that we are a strong team. But having said that, we have only been together as a team for a short period of time, so we have to improve from here. Once we go back to our own teams, we all must feed off this tournament and implement what we have learned.

MF #17 NAKAMURA Keito (Gamba Osaka)
It was my first time getting called up to the U-21 Japan National Team, and the first match against Chile gave me an opportunity to get the feeling on how my teammates are playing. In the first match, I had the opportunity to gradually get involved in chances, but in today’s match against Paraguay, I entered the match with just 10 minutes left. It presented me with a great challenge, as it made me think what I must do in the given time frame, and how to approach against opponents fully retreated in front of their goal. I had to take more shots from long distance, but a good team like Paraguay would not let you take shots so easily, so we have to be more creative to create those opportunities.