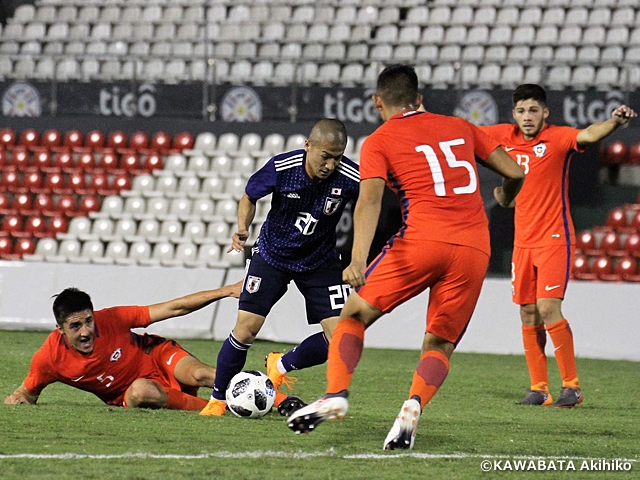 On Tuesday 21 March, U-21 Japan National Team played U-21 Chile National Team in a football exchange tournament held in part of the SPORT FOR TOMORROW (SFT) programme supported by the Japanese government. In the match held in Asunción, the capital of Paraguay, Japan lost their first match of the tournament 0-2.

After traveling for 30 hours, the Japanese side arrived in Paraguay the day before the match. According to Coach MORIYASU Hajime, “we didn’t have time to go over our tactics at all, we faced the match unprepared.” The starting line-ups included players who’s never been called up to the national team, and players playing for the first time under coach Moriyasu. But as the coach reflected on the match, “the players played a lot better than I expected,” the players showed an excellent performance. 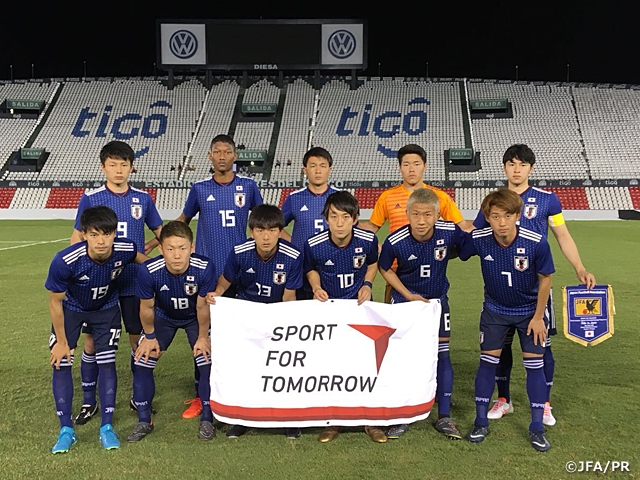 From early in the match, Chile applied aggressive pressure against Japan. Led by defender NAKAYAMA Yuta, the Japanese defence line evaded the pressure and carried the ball upfront, utilising the two shadow-strikers to create chances.

“We managed to move the ball with authority, while avoiding the opponents’ pressure. Our team showed improvements during the game.” Said Coach Moriyasu after the match.

In the 18th minute, Chile came close to scoring after Japan made a passing error in their delivery from the midfield to the defensive end. However, this error didn’t stop Japan from utilising the buildup from the defensive line. In the 20th minute, they would create a chance from this buildup by switching sides before defender APPIAH TAWIAH Hisashi delivered a vertical pass to the shadow striker. Forward UEDA Ayase’s shot was blocked by the opposing defender, but the bench cheered on as the team showcased an ideal attack which they were striving for.

A dynamic delivery to switch sides from the defence line initiated an attack in the 22nd minute. Right wing-back HATSUSE Ryo got to the end of the feed, laying down a header for MIYOSHI Koji, who then launched a shot from distance. The shot was blocked by the goalkeeper, but Japan gradually gained momentum.

However, the Chilean side would not back down easily. As Coach Moriyasu described them as being “tough and knows how to reel in the momentum on their side,” they anticipated for flaws to exploit and pounced on it. In the 29th minute, their number 10 midfielder ALLENDE fired a shot that grazed the bar. Tension remained high in the match. 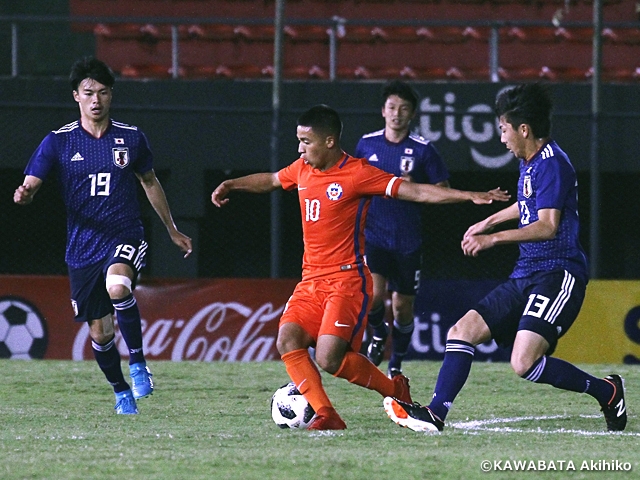 At the start of the second half, Japan brought in ENDO Keita and ITO Tatsuya, followed by a substitution of four players in the 57th minute in efforts to score the opener. Japan seemingly found the net first as Ito penetrated the left flank with his dribble before sending a cross to forward MAEDA Daizen, who slotted the ball into the goal, but his effort was called offside.

Japan took the initiative in terms of ball possession but struggled to score goals, while Chile showcased their ability to convert chances. GUERRA intercepted a weak pass delivered from the Japanese defence to the goalkeeper, laying off the ball to FRANCO LOBOS, who scored the opening goal. In additional time, Chile forced a turn over from the Japanese defence, drawing an own goal to finish the match 0-2. Following the long-distance travel, Japan performed well considering the circumstance and the fact they had no time to go over their tactics. Ito described the match as “a match we should have won.”

Japan will face Venezuela in their second match on Firday 23 March, and Paraguay in their third match on Sunday 25 March.

MORIYASU Hajime, Coach (U-21 Japan National Team)
We will be gaining great experience playing against world class teams like, Paraguay, Chile, and Venezuela in this tournament, as it’s a rare opportunity for us to play with these South American teams. We have traveled for 30 hours and arrived just the day before of the match. This experience itself should make our team, including our staffs tougher. In our match today, we felt the need to heighten the quality of our attacking third, and our approach in fifty-fifty balls. We also must improve on our decision makings, to determine the best play possible to lead the team to victory.

DF #3 NAKAYAMA Yuta (Kashiwa Reysol)
(Facing the opponent’s pressure) We coped with it alright, and we felt like we can handle it. As Coach Moriyasu mentioned, we must improve our quality in the attacking third and take more shots to create more threats to our opponent. It was clear what we lacked, and what we gained in this match. We faced the match with very little preparation and many players were called up to the national team for the first time, so we focused on communicating to each other before and during the match. If we can all focus on that, the team will become much stronger.

DF #15 APPIAH TAWIAH Hisashi (Ryutsu Keizai University)
I was nervous because it was my first time playing for the national team. But my teammates welcomed me in, and I felt like I was part of the team. I have never played in a wing-back formation, and I had to learn the three-back positionings from scratch. On the pitch I was trying to perform what I understood in my head. I felt like I did okay in terms of the buildups, but my strength is in ball carrying skills, so I hope to showcase my dribbles a little more.

MF #14 ITO Tatsuya (Hamburger SV / Germany)
Regardless of it being the first national team appearance, I think we had to win the match today. There were a few times where we could have scored if I managed to change place with another player, and I think that’s where I am expected to produce, so it’s disappointing that I couldn’t get the results. Coming into the match we knew our opponent will display a typical South American style, and their slide tackles were very deep. When we had possession of the ball, they came after us aggressively. We knew how they were going to play, so I wish we could have won. We still have two more matches, so I’ll do my best to play well.

Héctor Rosendo Robles Fuentes, Coach (U-21 Chile National Team)
We are very honoured to be a part of such wonderful exchange programme. I am happy with our team’s performance. The Japanese team showcased great speed in both offence and defence, but our team corresponded quickly and took the initiative of the match. Our team has shown great improvements. The matches played in this programme are all friendly matches, but it will serve as a great platform to improve our team overall, including the technical aspects. It’s a great opportunity for our team, and I hope to see more of these programmes in the future. Thank you very much.