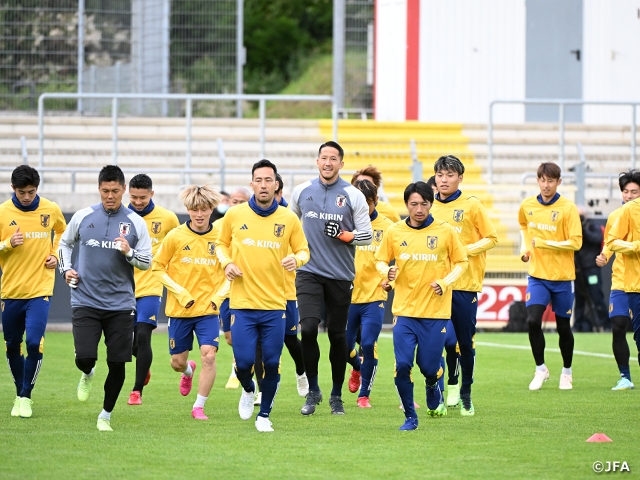 On Monday 19 September, the SAMURAI BLUE (Japan National Team) started their training camp in Dusseldorf, Germany ahead of their KIRIN CHALLENGE CUP 2022 matches against the USA (Friday 23 September) and Ecuador (Tuesday 27 September). Of the 30 players selected for the tour, 27 showed up for training on the first day, excluding NAGATOMO Yuto (FC Tokyo), GONDA Shuichi (Shimizu S-Pulse) and SOMA Yuki (Nagoya Grampus).

This will be the last time the team can come together as a team before the FIFA World Cup Qatar 2022™, which starts in November, and will be held in Germany, the country with the second largest Japanese population in Europe.

Before the start of the training session, the players, who are preparing for the KIRIN CHALLENGE CUP 2022 matches against the USA and Ecuador, interacted with about 300 students attending the Japanese Schools in Dusseldorf, and held a photo session with all the children. FURUHASHI Kyogo (Celtic FC), who seemed surprised to see such a large number of Japanese children abroad, said: “It's just like being in Japan,” and the exchange allowed the players to realise that they have a strong fanbase who support the team even when traveling abroad. 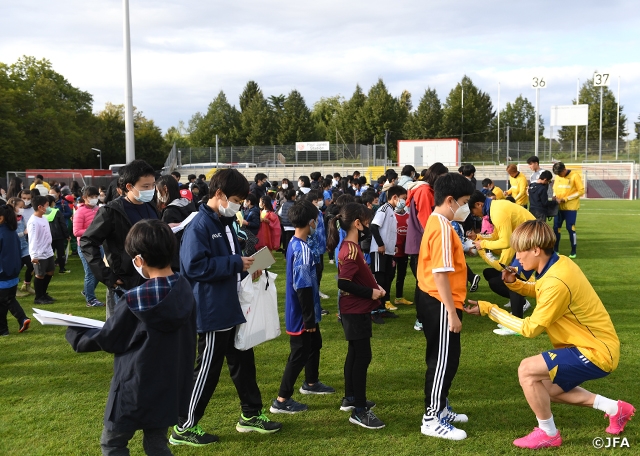 Following their warm exchange with the local children, the team started their training session with a light jog, as the players who had recently played in a match for their club left the session early, while the remainder of the players worked up a sweat through passing and possession drills. Goalkeepers KAWASHIMA Eiji (RC Strasbourg) and TANI Kosei (Shonan Bellmare) were seen working with goalkeeper coach SHIMODA Takashi, as they were the last ones leaving the training field.

The team will continue to train in Dusseldorf ahead of their match against the USA on Friday 23 September. 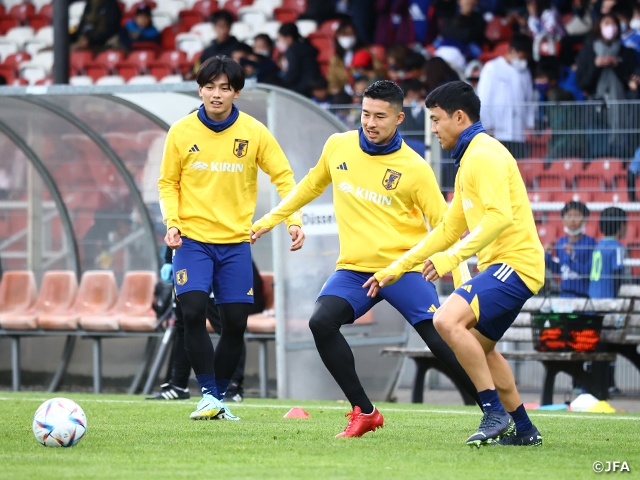 DF #20 NAKAYAMA Yuta (Huddersfield Town AFC/England)
I feel very fortunate that the team is playing at a location where I didn’t have to travel much and deal with less jetlag than usual. I also felt very warmly welcomed by many Japanese supporters today and went to training with a very warm feeling. As a footballer, I am grateful for the opportunity to play in an environment that makes me feel at home. I have been able to play regularly at my club, so I am in good condition, but I hope to raise my intensity level as the match approaches. We will be playing two matches in a short period of time, but I have gotten used to playing in congested schedule with my club, so I feel prepared for these matches. Players will have to make a case for themselves within this tight schedule, so I will try to stay aggressive to earn a spot on this team, while also striving for results as a team. I haven’t really given much thought on the World Cup yet, as I am just focused on what I can do now against what is coming. I will give my utmost effort to the tasks in front of me now and try to make the most of this precious time.

MF/FW #9 FURUHASHI Kyogo (Celtic FC/Scotland)
I feel very thankful that so many people came to watch our training session. I am aware that many people who couldn’t make it here are also supporting us, so I want to repay them by showing a solid performance on the pitch. I will try to make a case for myself in each of our training sessions and matches. To start with, I hope to play in the match against the USA and score a goal that can lead the team to victory.

MF/FW #17 TANAKA Ao (Fortuna Dusseldorf/Germany)
This is my first callup since June, so it is very inspiring to see everyone in this team. This is a rare opportunity for us to play a match in Europe, so we hope to showcase a spectacular match for those who come to see us at the stadium. A lot of children came to see our training today and it made me want to become a player that can make these children dream of becoming a footballer one day. I want to demonstrate what I can do on the pitch, but at the same time I want to contribute to winning the match, because the team’s victory should always be our top priority. I hope to play a role that can help the team carry out the game plan smoothly and allow the attackers to play comfortably in the final third.