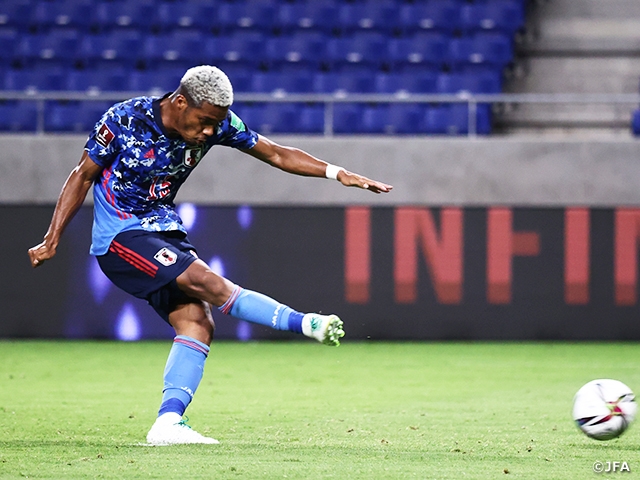 On Tuesday 15 June, the SAMURAI BLUE (Japan National Team) faced the Kyrgyz Republic National Team in their final group match of the second round of the FIFA World Cup Qatar 2022™ Asian qualifiers. In the match played at Panasonic Stadium Suita (Osaka), Japan scored five goals, including the hat-trick of ONAIWU Ado (Yokohama F.Marinos), to finish off the second round with a perfect 8-0 record.

With the team already qualified for the final round, coach MORIYASU Hajime rotated his entire starting line-up, except for MORITA Hidemasa (CD Santa Clara), since their match against Serbia on 11 June. Onaiwu was given his first start for the SAMURAI BLUE, as he was named as the lone striker. SAKAMOTO Tatsuhiro (Cerezo Osaka) also got his first start, as he was positioned as an attacking midfielder along with HARAGUCHI Genki (1. FC Union Berlin) and ASANO Takuma (FA). The defensive end looked similar to how they lined-up against Tajikistan on the 7 June, with the exceptions of OGAWA Ryoya (FC Tokyo) starting in left full back and KAWASHIMA Eiji (RC Strasbourg) starting in goal.

It was Japan who took the initiative, as Asano and Sakamoto penetrated the flanks to create opportunities from the early minutes. Onaiwu responded to a pass delivered by Asano and struck a shot in the 12th minute, followed by the shots taken by Onaiwu, Haraguchi, and Sakamoto in the 23rd minute. With Japan picking up momentum in their offence, the opening goal came in the 27th minute, when Onaiwu’s header induced a hand ball from a Kyrgyzstani defender. The striker took the spot kick himself, successfully sending the GK to the other direction to score his first goal with the national team.

Four minutes later, Onaiwu connected with a cross sent by KAWABE Hayao (Sanfrecce Hiroshima) from the right side to score his second goal of the match, before striking a header off of a cross delivered by Ogawa just two minutes later, completing a hat-trick in a span of six minutes. The 26 year old striker who was called up to fill in the roster spot for the injured OSAKO Yuya (Werder Bremen), made a strong case for himself in his second national team appearance.

In efforts to rally back, Kyrgyz Republic applied aggressive pressure to win the ball and made attempts to initiate quick counterattacks. However, with Kawabe and Morita covering a wide range in the midfield, and with NAKATANI Shinnosuke (Nagoya Grampus) and SHOJI Gen (Gamba Osaka) keeping a close eye on their ace Mirlan MURZAEV, the Kyrgyzstani offence struggled to create opportunities.

Kyrgyz Republic did get a goal back just before halftime, when Gulzhigit ALYKULOV was brought down in the box, allowing Murzaev to convert the PK. With the team finishing off the first half on a high note, Kyrgyz Republic gained momentum in the second half, showing great intensity to threaten the Japanese goal. However, with HASHIMOTO Kento (FC Rostov) and FURUHASHI Kyogo (Vissel Kobe) being introduced in the 61st minute, Japan started to regain their dominance in ball possession, leading to back to back shot attempts made by Kawabe and Asano in the 63rd minute.

Coach Moriyasu made another change in the 68th minute, taking out Onaiwu in favour of SASAKI Sho (Sanfrecce Hiroshima) to change their system to a three-back formation. This change proved to be effective, as Sasaki scored a goal in the 72nd minute, followed by the goal of Asano in the 77th minute. Japan ended up firing 25 shots in this match, while keeping the opponent to just one shot, showing a convincing performance in their final group match of the second round.

All fixtures in the second round came to an end on this day, as Tajikistan won their fixture against Myanmar 4-0 to clinch second place in Group F. The 12 teams advancing to the final round are, Syria, Australia, Iran, Saudi Arabia, Oman, Japan, UAE, Korea Republic, China PR, Iraq, Vietnam, and Lebanon. The same 12 teams have also clinched the 2023 AFC Asian Cup.

Group H contained only four teams compared to five teams in all other groups after DPR Korea withdrew from the competition. Therefore, the results against the fifth place team were not counted when determining the ranking of the second place teams.

The final round will start in September, where the 12 teams will be divided into two groups of six teams to play home-and-away round-robin matches. The top two teams of each group will qualify for the World Cup, while the third-place teams will face each other with the winner advancing to the inter-confederation play-offs. The draw for the final round will be held in July, and the seeding for the draw will be based on the FIFA rankings. 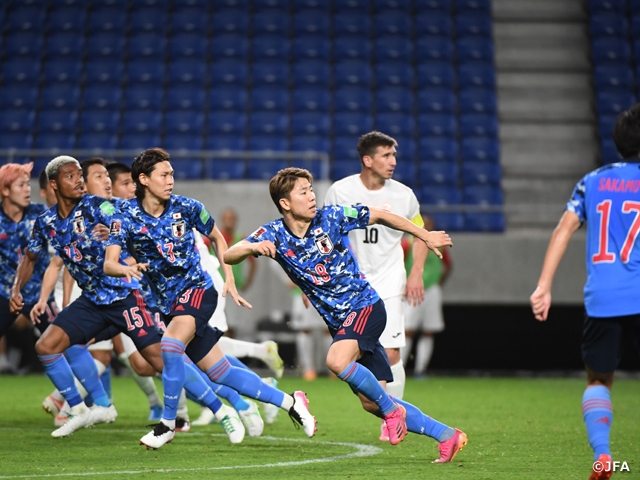 MORIYASU Hajime, Coach of SAMURAI BLUE (Japan National Team)
We have made a drastic change from our line-up against Serbia, but I told my players that we needed to prove that Japan has a deep player pool and that we have plenty of talented players. Since the qualifiers resumed in March, the players have shown great understanding to the team concept and worked extremely hard in each match to achieve our goal. With the players adapting to the team concept, it allowed us to showcase a steady performance regardless of who is on the pitch. The presence of the U-24 Japan National Team has also allowed us to broaden our player pool and showcase the possibilities of the Japan National Team. The match against Serbia has given us confidence to compete at the world stage, while today’s match has made us realise what we need to improve ahead of our future matches.

We must brace ourselves for the final round, because the coemption level will increase exponentially. There will be no margin for error, so we must stay focused and try to reach a higher level, both as a team and as individuals. Leading to this point, we had many players involved and see our team develop through many variations of players. It will be extremely hard to select the squad for the final round, but I am confident that we will have a strong team regardless of who I choose. I hope that the players are feeling the same confidence that I am feeling. I think that the players have been doing a great job on balancing individual plays and the collective plays, showing great understanding of the team concept while making challenges to create opportunities with their individual skills.

However, we must also address the goal we conceded today. We need to be better at finishing off the first half and maintain our intensity level until the final whistle. We also conceded a goal against Tajikistan where our opponent had only one shot. We need to play more severely and try to shutdown our opponent. Our opponents will also be playing tighter defence in the final round. Therefore, we must raise the quality of our offence as well. We must all strive to get better and prepare ourselves so that we can showcase our best performance regardless of the environment. Considering that the future matches could be played in a bubble to prevent the spread of COVID-19, this was a great experience for us to simulate such situation. Despite all the restrictions, the players showed great patience and focused on the team’s activities. They really understood that we are given the opportunity to play football because of the tireless efforts of so many people.

DF #16 OGAWA Ryoya (FC Tokyo)
I knew that this was my last chance to make a case for myself, so I was determined to produce results in this match. We were facing one of the strongest opponents at the second round, so I entered the match fully focused. I wanted to get myself involved in the team’s goals, so I am glad I was able to assist a goal. However, I also noticed that I need to work on a lot of things, so once I return to my club, I will work to improve on those aspects. I hope to get myself involved in more goals. I also need to make quicker decisions, because the opponents will be much faster and stronger at the final round.

MF #21 KAWABE Hayao (Sanfrecce Hiroshima)
I was told that Kyrgyz Republic is the strongest team in this group. Despite creating numbers of opportunities, we struggled to score the opening goal, but we entered the match knowing that things will not always go according to out plan, so we were able to maintain our composure. It felt great when our patience got paid off and it was great to see our side score multiple goals afterwards. When I assisted the goal, I knew Onaiwu was making a run and I was able to deliver the ball as soon as I made eye contact with him. I played a bit too passively in our previous matches, so I was anticipating for my chance to press up, which allowed me to create good opportunities for the team. However, I still need to increase the frequency and quality of my attacks. The fact that I was able to earn an assist was the biggest accomplishment out of the tree matches I played in. I still have plenty of room for improvements, but I am glad I was able to produce results.

MF #17 SAKAMOTO Tatsuhiro (Cerezo Osaka)
I focused on taking on the opponent one-on-one if the opportunity presents itself. I was constantly looking to make passes that can lead to a goal, so I am glad I was able to assist that goal. However, there were also opportunities I could have converted myself, so I am not totally satisfied with my performance. I learned many things and gained a lot of confidence from this camp with the national team, but I still feel like I need to make a case for myself, so I will strive to earn more results once I return to my club. Being able to score more goals is one thing, but I also need to get stronger in order to compete against stronger opponents.

FW #15 ONAIWU Ado (Yokohama F.Marinos)
I am glad that I was able to earn results in the form of goals, but I still felt the need to create more opportunities for the team. I will try to showcase a steady performance and continue to score goals in our future matches. Scoring goals is the best way to make a case for myself, but in order to do that against stronger opponents, I must raise the overall level of my plays. With the help of so many people, I feel that I have been able to become a more versatile player. This is not something I have accomplished by myself, so I will always be grateful to everyone and try to give back by producing good results with the national team. I will not sit on my laurels for scoring goals or getting named into the national team, as I will continue to set my goals higher and give my contribution to help the team.

Alexander KRESTININ, Coach of Kyrgyz Republic National Team
Compared to the first leg when we played at our home, the entire situation has changed dramatically. We were not able to thoroughly prepare ourselves for this match, and despite giving our best efforts under the given circumstance, we were not able to gain the result we desired. Japan has many players who plays in Europe and showed a great edge in terms of quality and experience. We are in the midst of a generation change and these matches at the qualifiers have given our younger players a great learning experience.