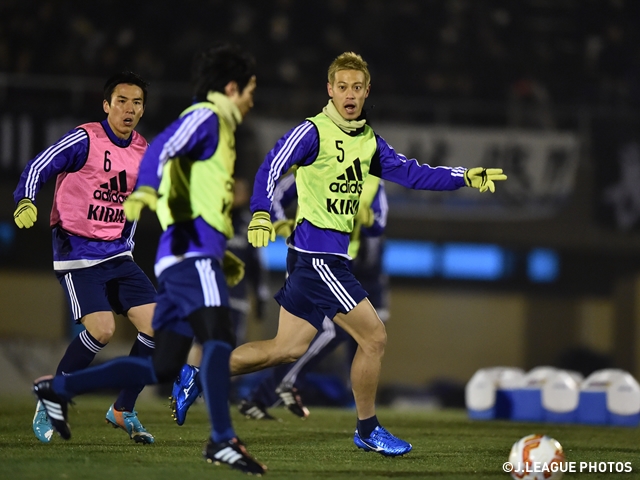 On Tuesday 30 December, SAMURAI BLUE, Japan National Football Team, had the second day of the camp for the AFC Asian Cup 2015 Australia to be kicked off on 9 January, 2015. The team went through the physical fitness test in the morning in Tokyo and the practice in Chiba in the evening.

Similar to the previous days, the light workout had players separated into three-man groups by positions and engage in a passing drill using width of the pitch before moving onto a 10-on-10 passing drill, this time using only limited area on the pitch, in the total of one hour.

After the practice, to warn his teammates, AC Milan forward Honda Keisuke said “it’s dangerous if we think like we can win because it’s just the Asian Cup. We should never forget that the last time wasn’t easy at all.”
In the last tournament in 2011, Japan defeated Korea Republic at the end of the penalty shootouts in the semi-final, and won over Australia in the extra-time final contest for their first since 2004 and the fourth overall Asian Cup title.
“This time, on our way to the championship, we can’t play at the same level as the last time. We have to aim for both the results and the details.” added Honda.

Japan, looking to win the fifth title, will play against Palestine, Iraq and Jordan in the group stage and the final is scheduled on 31 January.

In addition, the practice of the day was observed by the coaching staff of each generational Japan national team. In the meeting before the practice, they shared their vision and fundamental development policy which is consistent among all generations to grow young players of each generation up to the senior national team. Also Javier Aguirre, the head coach of SAMURAI BLUE, joined the discussion to make sure of the importance of the effective player development.

Shimoda Masahiro, Chairman in charge of strengthening in the Technical Committee, said “What we are trying to establish is sharing our vision and working together to develop players consistently from youth generation all the way to the senior national team. We made sure that our shared consensus is acquiring all the information of the players at each generation and sending as many of them as possible up to a higher level.” 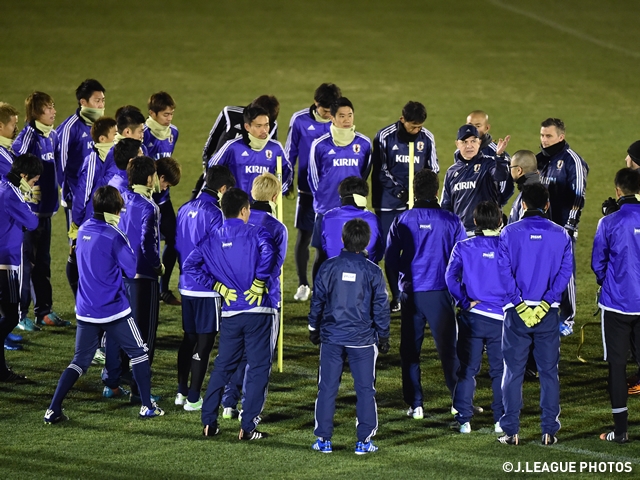 HONDA Keisuke (AC Milan)
Conditioning is important first of all to play football. I think players don’t pay much attention to off-pitch issues, so they don’t affect our plays on the pitch. We would rather spend more time for paying more attention to details of our tactics and getting more accuracy. Once we start our matches, we can’t do much other than making minor adjustments, so we had better have our coach lead us and do what we can do only now. It’s my first time to go for a back-to-back title. I want to learn from those who are so-called champions and add some more this team’s original elements to it. The AFC Asian Cup is not an easy tournament to win. Even the last time that we won, it wasn’t an easy win at all. I also think we have to win this time by playing better football than last time. So we have to aim for both the result and details.

NAGATOMO Yuto（FC Internazionale）
We have two weeks before the tournament so I think we shouldn’t rush too much. The temperature is high over there, so we need to take care of ourselves in terms of that. Our mental state is also important in a tournament like this, and we shouldn’t be oversensitive to what’s out there and we should be stable. The year 2014 has been disappointing because we didn’t have good results including in the FIFA World Cup. Only good results can get me over my self-disappointment. We will stay positive and stick to getting good results on our way to winning the championship.

UEDA Naomichi（Kashima Antlers）
Now that I am on the roster, I want to play and I think I have a chance to do it. So I will be aggressive. (On the teammates on the national team) All teammates are the players I have been watching on TV, and it’s so inspiring to be surrounded by them. I want to learn from them. The AFC Asian Cup is far better than the Asian Games, so I want to see how much I can play against the other countries’ senior national teams.

KONNO Yasuyuki (Gamba Osaka)
After the season was over, I got into the off-season, so it’s difficult to get back into shape, but it’s better than I expected. Australia has totally different climate from Japan, so no wonder it will be a difficult tournament. But I came here determined to win the championship. I have never got into a new year with only training and no matches to play, but it’s something you can’t experience often. For the tournament, I will keep getting up my conditioning.