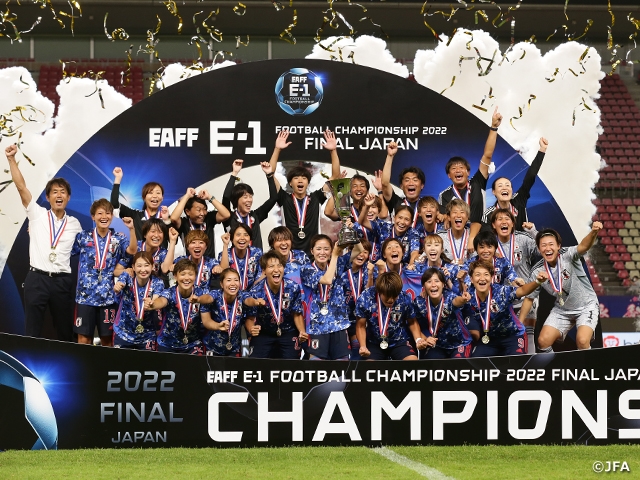 In position to win the tournament title with a draw or better, Japan made seven changes to their starting line-up since their match against Chinese Taipei, as YAMASHITA Ayaka was given her first start of the tournament, while SHIMIZU Risa was once again given the armband. TAKARADA Saori started for the third straight match and UEKI Riko returned to the starting eleven since the first match.

For Japan, this was their first time facing China PR since losing to them at the semi-finals of the AFC Women's Asian Cup India 2022™ held earlier this year. The match started with Japan controlling the ball possession to take the initiative. In the 11th minute, CHIBA Remina delivered a heel pass to set up the shot of MIYAZAWA Hinata, which just missed the right side of the goal.

China PR, who needed a win to claim the title, anticipated for their opportunities, as ZHANG Rui made an attempt in the 26th minute, but Shimizu was there to block the shot. Japan was playing their first night game of the tournament under humid conditions, but their defenders remained focused. 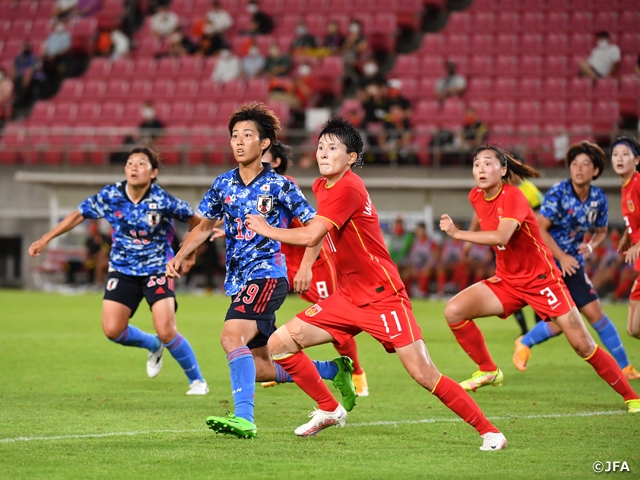 Following a scoreless first half, Japan continued to take control in the second half. In the 51st minute, Ueki came within inches to score the opener, when she fired a left footed shot from just outside the box, but her attempt was denied by the crossbar.

A counterattack initiated in the 74th minute saw the ball reaching WANG Shanshan, but MIYAGAWA Asato was there to deny the opportunity. The Japanese defence showed great coverage to keep the Chinese side to just one shot taken in the second half.

In efforts to break the deadlock, Head Coach IKEDA Futoshi introduced NARUMIYA Yui and SEIKE Kiko in the 65th and 80th minutes respectively, but the home side fell short from finding the back of the net, as the match ended 0-0. As a result, Japan won their second straight (fourth overall) EAFF E-1 Football Championship, with a record of two wins and a draw.

At the post-match awards ceremony, Yamashita was named Best Goalkeeper and Shimizu was named MVP of the tournament. When Shimizu raised the trophy high above the podium, gold and silver confetti tapes flew across the night sky of Kashima Football Stadium, and the audience applauded the team for their first title under coach Ikeda.

The Nadeshiko Japan's second consecutive East Asian title certainly gave momentum to the SAMURAI BLUE (Japan National Team), who were set to face Korea Republic on the following day with the championship on the line.

IKEDA Futoshi, Head Coach of Nadeshiko Japan (Japan Women's National Team)
We are happy to have achieved our goal of winning the E-1 Football Championship held in Japan. I would have liked to claim the title with a victory, but it was great to see our players fight tenaciously throughout the match. I told the players that although there are areas that we need to improve on, we should first share and embrace the joy of winning the title. We managed to try out different things in each of the three matches and the players showed great understanding of their roles and willingness to fight today. The team has shown great development over the course, but we still have long ways to go, so we want to take it one step at a time.

DF #3 TAKARADA Saori (Linkopings FC/Sweden)
Winning the title was our goal, so I am glad we were able to achieve it. Personally, I think I was able to fight hard to win the ball, didn’t let the opposing forward face our goal, and prevent them from creating opportunities in the final third. I was given the opportunity to play in various positions throughout this tournament, and although I was able to do well in some areas, I felt that I needed to improve on the details and intensity level, so those are some of the things I must work on once I return to my club. 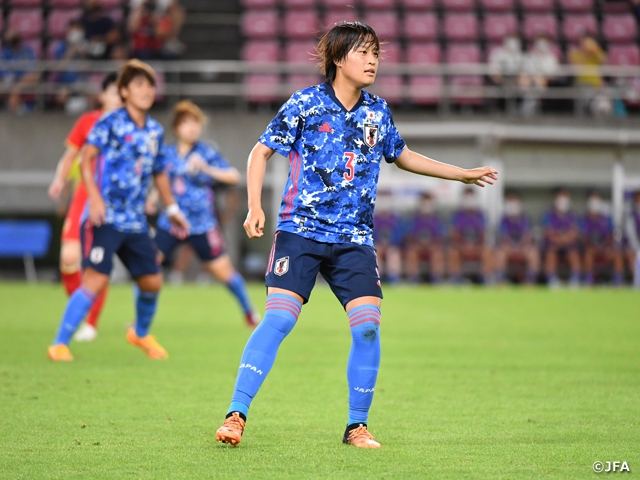 MF #16 HAYASHI Honoka (AIK Fotboll/Sweden)
We struggled to collect the loose balls in our midfield against Korea Republic, so that was something we focused on in today’s match. The fact that we were winning those loose balls throughout the match led to this victory. However, in terms of our offence, I feel like we could have done a better job creating opportunities. It is disappointing that we couldn’t cap off the tournament with a win, but we will certainly celebrate this title for now. 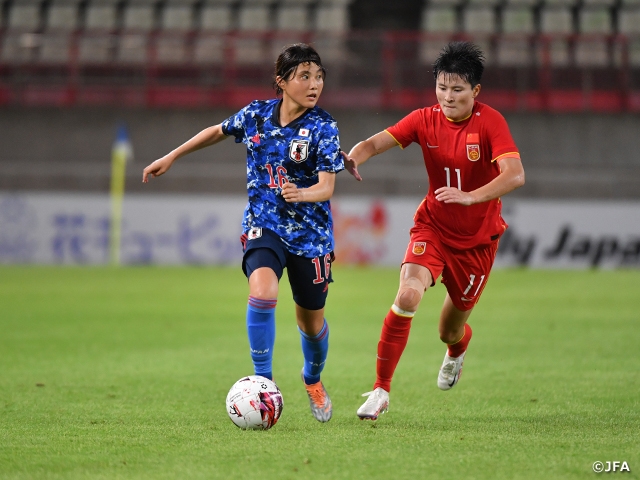 FW #19 UEKI Riko (Nippon TV Tokyo Verdy Beleza)
I am sure that everyone is disappointed that we couldn’t finish the tournament with a win. But we are also relieved to achieve our goal of winning the title. As a striker, my job is to score goals, so even though I was able to assist a goal, I regret the fact I finished scoreless in this tournament. I hope to make the most of this experience and strive to showcase a better performance in the future. Although I am disappointed with my own performance, I am happy that the team has won the E-1 title.