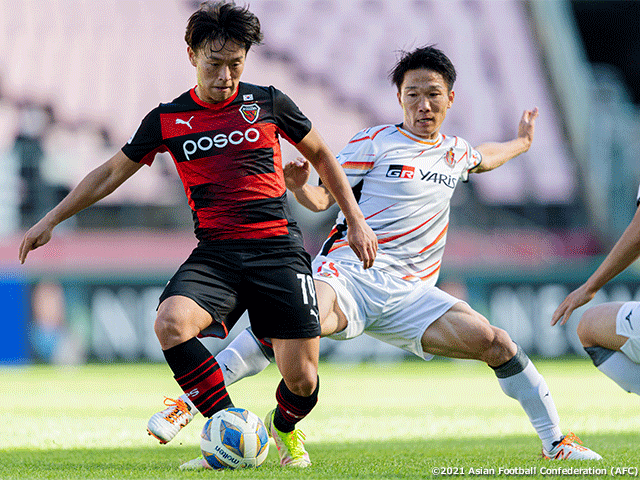 The AFC Champions League (ACL) 2021 East quarterfinals took place on Sunday 17 October in Jeonju, Korea Republic, where Nagoya Grampus lost to FC Pohang Steelers (Korea Republic) 0-3, failing to advance to the semi-finals. With this result, all Japanese clubs are now eliminated from the tournament.

Nagoya, the only Japanese club to make it through to the quarterfinals, faced Pohang, who they had also faced in the group stage, in search for their first semi-finals appearance in 12 years. Due to the effects of the Covid-19 pandemic, the quarterfinals were changed to a single-leg knockout fixture held in Korea Republic.

Despite having the edge in the pervious two meetings with one win and one draw, Nagoya struggled mightily to convert their opportunities, allowing their opponent to pick up their pace in the second half and score the decisive goal.

Nagoya topped the group stage with five wins and one draw, and defeated Daegu FC (Korea Republic) 4-2 at home on Tuesday 14 September, thanks to the hat trick scored by Polish striker Jakub SWIERCZOK, who joined the club this summer, reaching the ACL quarterfinals for the first time since 2009.

With the club in fourth place in the J.League and reaching the final of the J.League YBC Levain Cup, Nagoya carried great momentum into the ACL quarterfinals, as they arrived in Korea Republic on 13 Wednesday and resumed training on the following day. The match started with Nagoya taking control of the ball possession and creating multiple close chances against an opponent who played defensively.

MATEUS struck a powerful shot in the 13th minute, followed by the shot taken by Swierczok, who responded to a cross sent by MORISHITA Ryoya in the 32nd minute, but both attempts failed to capture the target.

A minute later, a golden opportunity was created for Nagoya, as Swierczok snuck a shot through the goalkeeper, but a Pohang defender made a tenacious effort to block the shot. INAGAKI Sho responded to convert the deflection, but his effort was also denied by the goalkeeper who through out his body to make the save. 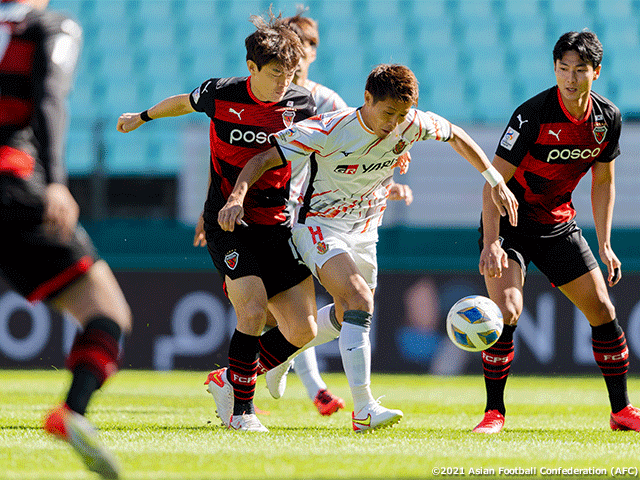 After the first half ended 0-0, the tide gradually shifted towards the Korean club.

Pohang, who finished second in the same group as Nagoya, defeated Cerezo Osaka 1-0 in the round of 16 to improve their record against Japanese clubs to nine wins, five draws, and two losses in 16 meetings. Although they are in seventh place in the domestic league this season, the team has shown high level of defensive awareness in the first half against Nagoya and started to take control of the match by applying aggressive pressure from the early minutes of the second half.

Gradually picking up their pace, Pohang scored the opening goal from a corner kick in the 53rd minute. Although Nagoya’s goalkeeper Mitchell LANGERAK was able to block a shot from close distance, LIM Sang-hyub was able to convert the deflection to give Pohang the lead.

In efforts to equalise, Nagoya brought in MAEDA Naoki and SOMA Yuki in the 60th minute. A minute later, Swierczok responded to a freekick delivered by Maeda to make an attempt at goal, but his shot was not able to hit the target.

With momentum on their side, Pohang doubled their lead in the 70th minute, when LEE Seung-mo received the ball in between the two Nagoya centre backs before striking a right footed shot that shook the net. Lee has now scored in back to back matches, following his goal against Cerezo Osaka. 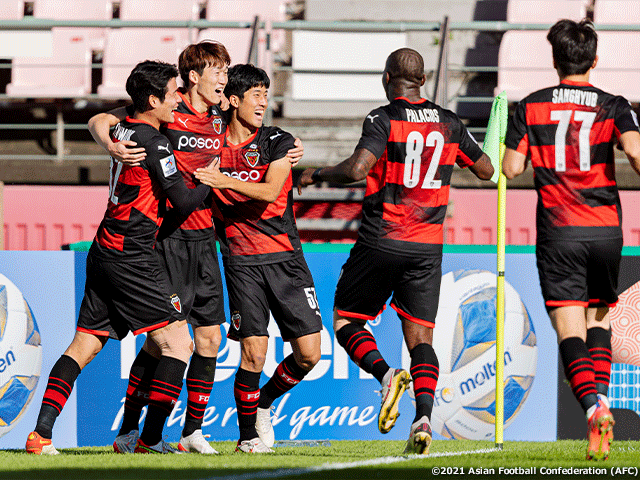 Nagoya introduced Mu KANAZAKI and Shumpei NARUSE to add layers to their offence, but they continued to get pushed back, as the distance between the players was too wide for them to support each other, disabling them from initiating the attacks they wanted. With time running out, Soma made an attempt from the left side, but his effort was blocked by the opposing goalkeeper.

In the second fixture played on this day, two time champions Jeonbuk Hyundai Motors faced the defending champions Ulsan Hyundai, in which Ulsan won 3-2 in overtime, setting up a semi-final matchup between two Korean clubs at the Eastern division.

The ACL final is scheduled to take place on Tuesday 23 November at Saudi Arabia.

Massimo FICCADENTI, Coach (Nagoya Grampus)
We played great football in the first half, but you need to score goals in order to win in football. This match taught us that if you do not take advantage of the chances you had in the first half, the second half will not go the same way. In the second half, Pohang capitalised on their first chance of the match, and the second goal was also scored from a non-threatening situation, so it made our players feel awkward. The last time we faced them in Thailand, we dominated the match and scored goals, and it could have gone the same way today, but while we struggled to score goals, the opponent converted their opportunity, and the situation changed entirely in an instant. We showcased a good enough performance that could have won us the match, so I don’t think we were affected by the fatigue from the consecutive matches. It was a painful loss, but we still have other matches to play. After the match, I told my players, “We still have a chance to prove our strength, so let's reset our minds 100% and make sure we win to prove our capability.”

DF NAKATANI Shinnosuke (Nagoya Grampus)
I came here to fight on behalf of many people, but the result was very disappointing. I am very disappointed because I had put my heart and soul into this tournament. It's hard to reset my mind, but I'll give my best effort to return to this stage next year.

KIM Gi-dong, Coach (FC Pohang Steelers)
I am proud of the team and want to say congratulations to the players and staff members. In the match in Thailand, we lost 0-3 after having one of our players getting sent off, so we were determined to win this time. We spent a lot of time analysing the opponent, but more than anything the players showed great mentality, which led to this victory. We knew this was going to be a difficult match, but we also knew that anything was possible. The first 15 minutes of the first half went according to plan, but after that we made some minor mistakes and our opponent started to dominate us, so we adjusted our positioning in the second half. I told my players during halftime, “If we can score first, it will change the balance and give us even more space,” and that is exactly what happened. I don't know why we have a better winning percentage against Japanese clubs. However, I can tell you that we analyse our opponents very closely, and the players are more focused when they play against Japanese clubs. We hope to keep up the good record.