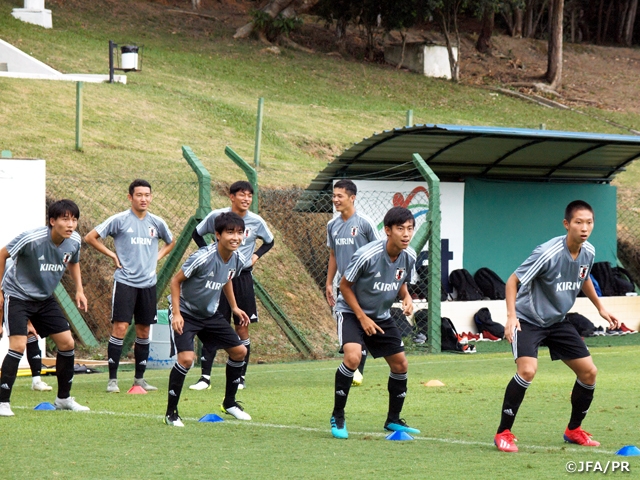 The FIFA U-17 World Cup Brazil 2019 has kicked-off its action on Saturday 26 October, as a total of four matches took place at Brasilia and Goiania. On this day, the host national, Brazil, defeated Canada 4-1 to get off to a strong start.

With their first group stage match scheduled on the following day, the U-17 Japan National Team held their final preparation session, which lasted for about an hour. Since launching the team in 2017, the final squad for the World Cup was gathered in Chiba on 15 October. Following their training camp in Sao Paulo, the team has finally arrived at their match site in Vitoria to prepare for their match against the Netherlands. The team was seen huddling up at the end of the training session, as coach MORIYAMA Yoshiro mentioned, “Let’s give everything we’ve got in tomorrow’s match.” Team captain HANDA Riku concluded the session by saying, “Let’s keep our composure and enjoy the match.” 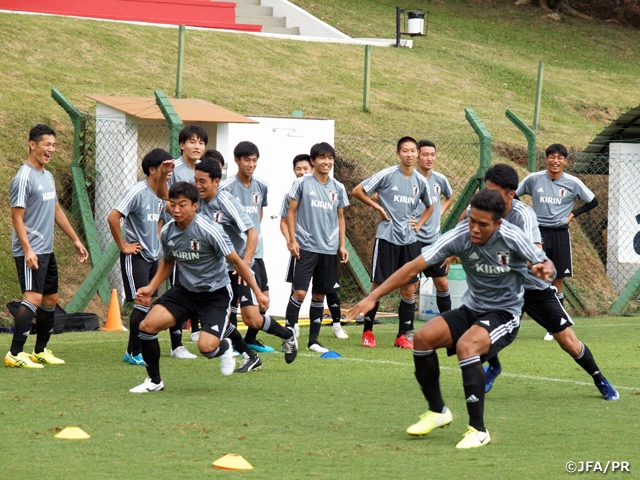 In their first group stage match, the Asian champions will face the European champions, the U-17 Netherlands National Team. Despite facing one of the tournament favourites, Japanese striker TOYAMA Shoji showed his confidence, “There should be plenty of opportunities to score goals,” while goalkeeper SUZUKI Zion also mentioned, “We will enter the match with confidence. I will actively communicate with my teammates to keep a clean sheet.” After the training session, many players were seen going over their plays with the technical staffs to double check their combinations.

The match between the U-17 Japan National Team and the U-17 Netherlands National Team will kick-off at 20:00 local time on Sunday 27 October (8:00 Japan time on Monday 28) at Estadio Klever Andrade.

MF #6 FUJITA Joel Chima (Tokyo Verdy Youth)
The Netherlands is a team with a very strong offence. However, as long as we have the possession of the ball, they cannot attack against us, so we will do our best to take control of the ball possession. We must not play passively, but rather play with aggression to take the initiative of the match. We must focus not to make careless mistakes and turnover the ball in our own territory.

FW #9 WAKATSUKI Yamato (Kiryu Daiichi High School)
I am feeling so excited and I want to play as soon as possible. After visiting the stadium yesterday, it got me more motivated and made my determination even stronger. Our team form has gotten better as we train here, and I feel like we are all on the same page as a team. Speed is my biggest strength. I have teammates who can effectively utilise my speed, so I just have to believe them and make runs. I hope to help the team win matches by exploiting the open space.

FW #10 NISHIKAWA Jun (Toko Gakuen High School)
We have been able to prepare ourselves very well ahead of the first match, so I am very excited. By visiting the stadium, it really got me motivated to showcase a good performance on that pitch. Following our training camp in Japan, the team has made positive progress throughout the course. Our ability to convert chances will define the outcome of the match, so building our rhythm in offence will play a key role in this match. We will give our best efforts to earn three points. 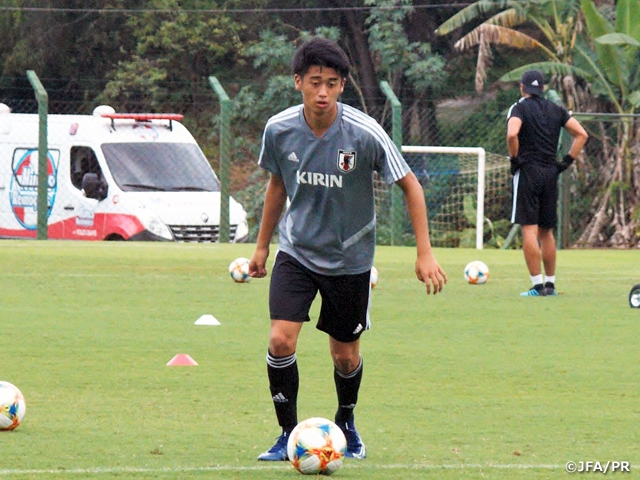