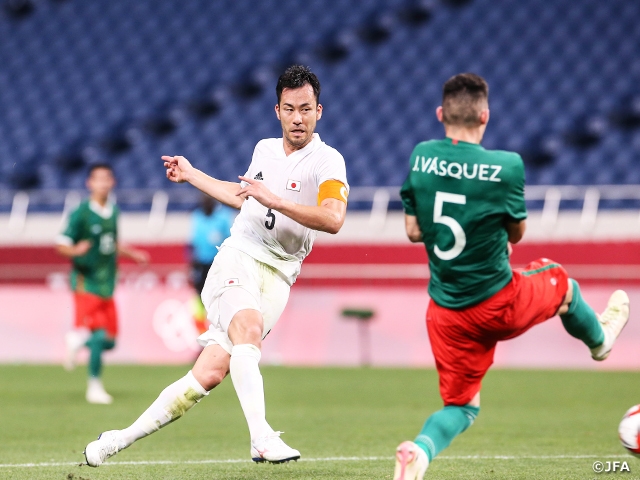 On Friday 6 August, the bronze medal match of the Games of the XXXII Olympiad (Tokyo 2020) men's football tournament took place at Saitama Stadium 2002, where the U-24 Japan National Team squared off against the U-24 Mexico National Team.

With both teams entering the match with two days rest following the semi-finals, the match presented a tough challenge for the players, both physically and mentally, but the Mexican players showcased great aggression from the early minutes to take the initiative of the match. 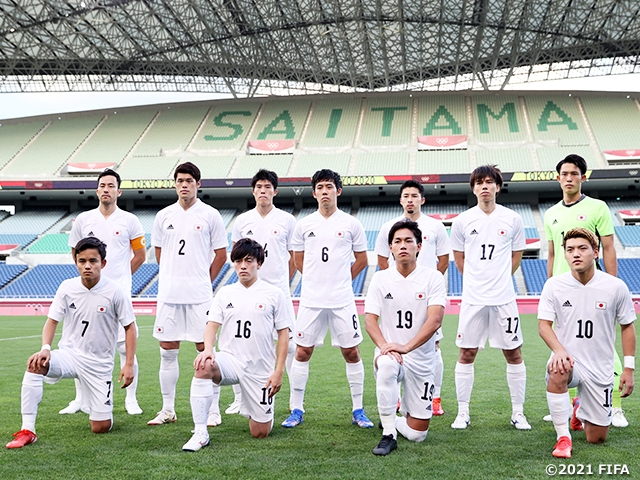 The two sides showed stark contrast in the way they entered the match, as coach MORIYASU Hajime later reflected, “Mexico entered the match with great momentum,” while KUBO Takefusa (Real Madrid) mentioned, “We entered the match poorly.” Despite the efforts made by Japan to find their rhythm, a PK was given to Mexico in the 11th minute, when ENDO Wataru (VfB Stuttgart) fouled Alexis VEGA inside the box.

After Sebastian CORDOVA converted the spot-kick to give Mexico the lead, Johan VASQUEZ made it 2-0 when he struck a header off of a FK in the 22nd minute. 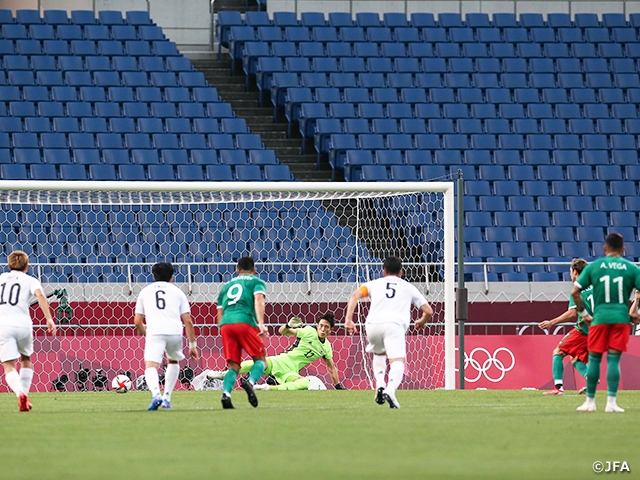 “Our players showcased their resilience to keep us in contention after trailing 0-2. That is something I am proud of as a coach.”

However, Mexico added an insurance goal in the 58th minute, when Vega converted a header off of a corner kick, giving his side a commanding lead.

In efforts to change the dynamics of the match, coach Moriyasu brought in UEDA Ayase (Kashima Antlers) and MITOMA Kaoru (Kawasaki Frontale) in the 62nd minute but continued to struggle to find ways to get the ball past the Mexican goalkeeper Guillermo OCHOA. Japan finally got on the scoreboard when Mitoma showcased a fantastic individual effort to net a goal in the 78th minute.

However, Japan fell short from making a rally to overcome the three goal deficit, as they lost 1-3 to Mexico at the bronze medal match to finish in fourth place.

Mexico’s coach Jaime LOZANO commented after the match, “Japan continuously made attempts to threaten our goal, which made it a very difficult match, but our players fought extremely hard. We knew Japan was a splendid team, but we were committed to win the bronze medal. Despite facing the host country, we entered the match with strong determination to win. Today has become an unforgettable day of my football career.”

Coach Moriyasu on the other hand commented, “It is regretful that we weren’t able to win the medal despite all the support we have received.” But the Japanese coach continued to share his thoughts, “The players showcased great growth leading up to the Olympics and it was a tremendous honour to be able to spend time with them. The players have given their utmost efforts at all times, whether in matches or in training sessions. As a coach, I am grateful to the players for allowing us to contend for the medal at this Olympics.”

With the conclusion of this match, the U-24 Japan National Team, which were launched in December 2017, have conclude their entire team activities. However, as team captain YOSHIDA Maya (U.C. Sampdoria) told his teammates, “Let’s meet again at the World Cup qualifiers,” the SAMURAI BLUE will soon restart their action towards the FIFA World Cup Qatar 2022™. The players will now strive to make the senor squad for the final round of the Asian qualifiers, which will start in September. 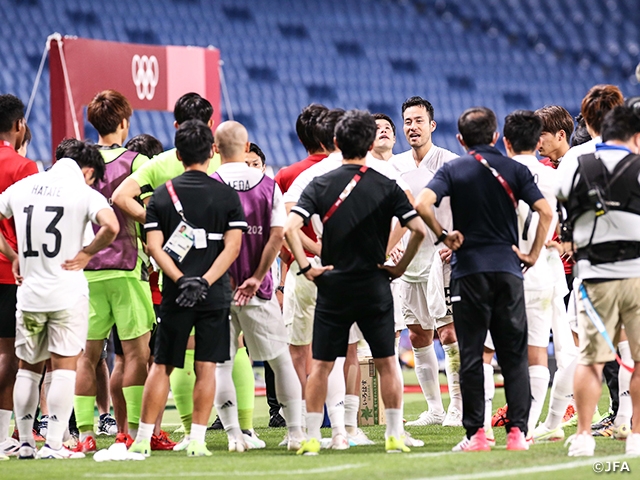 MORIYASU Hajime, Coach of U-24 Japan National Team
Although this event itself was in jeopardy due to the affect of the Covid pandemic, we were able to go through with the Olympics thanks to the tireless efforts of so many people involved since the bidding process. I would like to take this moment to thank everybody who was involved in making this Olympics possible. I believe that all the experiences of this Olympic games will nourish the body and soul of all athletes and lead to their future growth.

DF #2 SAKAI Hiroki (Urawa Red Diamonds)
First of all, I would like to thank the coach and staffs for considering me for the precious over-age roster spot. At the same time, I feel responsible for giving this generation the same regrets we felt nine years ago (at the London Olympics). We came up short once again, and we are open to criticism. We just have to showcase a stronger performance in the future to overturn our current reputation.

DF #4 ITAKURA Kou (Manchester City/England)
From the bench, I was able to tell that everybody was giving their best efforts to win against Mexico and finish the tournament with the bronze medal. This regret resonates with us individually, and although the activities of this team will end here, we will now strive to become a member of the SAMURAI BLUE to represent our country.

DF #5 YOSHIDA Maya (U.C. Sampdoria/Italy)
We must admit that this was a complete defeat. We deserve the loss and Mexico showcased a worthy performance to take the win. Heading into the match, we knew that we had to be cautious of their set-pieces, so it is regretful that we ended up conceding from set-pieces. The fact that we conceded early in the match also hurt us dearly. It felt like all of our flaws were exposed in this match. The bitterness we suffered in London and Rio have led us to this point, so we just have to feed off of this experience to reach a higher stage.

MF #7 KUBO Takefusa (Real Madrid/Spain)
I usually don’t get that emotional, but the fact that the tournament is over and that we ended up empty handed got the better of me. A lot of things were going through my mind, only if I scored, assisted, or gained a PK… Mexico entered the match strong and showed more aggression, which were something we lacked today.

MF #11 MITOMA Kaoru (Kawasaki Frontale)
Although I was able to score a goal at the end, I wasn’t able to do any else, and there were other opportunities I could have capitalised, so I am disappointed. There was a huge difference in terms of individual skills, so we must make the most of this experience to strive for a higher level. The fact that I got injured at the AFC Champions League prior to the Olympics was a result of me making efforts for the team, so I don’t regret that. 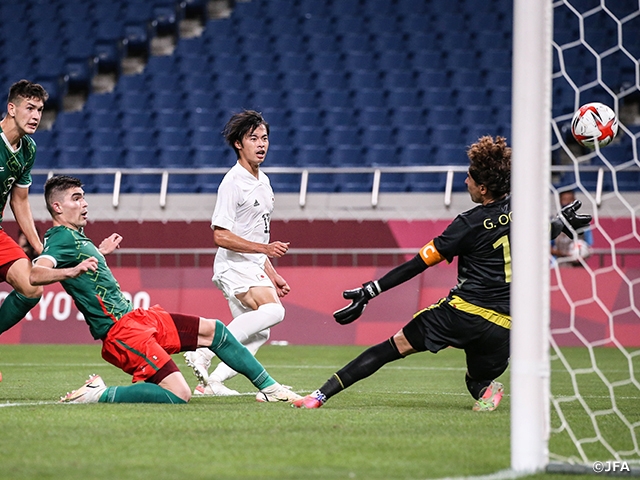