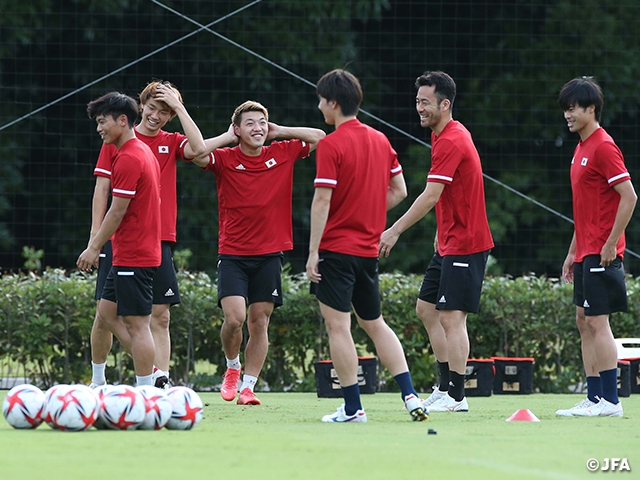 On Monday 2 August, the U-24 Japan National Team held their final training session ahead of their semi-final match against Spain in the Games of the XXXII Olympiad (Tokyo 2020) men's football tournament.

Prior to the training session, coach MORIYASU Hajime shared his gratitude towards the players for their efforts to reach the semi-finals and mentioned, “It is important that we fight one match at a time. Let’s give our utmost effort to prepare for tomorrow’s match.”

An official press-conference also took place on this day at Saitama Stadium 2002, where coach Moriyasu and NAKAYAMA Yuta (PEC Zwolle) made an appearance. While coach Moriyasu commented, “I want our players to be confident about what they have achieved and play with pride,” Nakayama followed by mentioning, “Our will to win the gold medal is getting stronger, but we must acknowledge that we made it this far by taking one step at a time. We will give our best efforts to earn a win over Spain.” 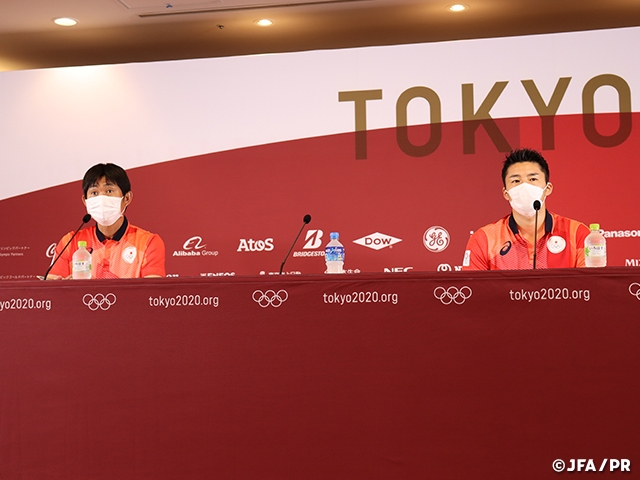 The two sides have faced each other at the KIRIN CHALLENGE CUP 2021 prior to the Olympics, and each played 120 minutes at the quarterfinals. “There will be stints where our patience will be tested” said ITAKURA Kou (FC Groningen), while ENDO Wataru (VfB Stuttgart) mentioned, “We cannot expect everything to go our way. We need to stay patient and try to navigate the match in our favour.” Through the meeting and training session, the players actively communicated with each other to get on the same page ahead of the big match.

The semi-final match between the U-24 Japan National Team and U-24 Spain National Team is scheduled to kick-off at 20:00 on Tuesday 3 August at Saitama Stadium 2002.

MORIYASU Hajime, Coach of U-24 Japan National Team
Our goal is to win the gold medal, and we can make history by reaching the final. However, we must realise that our success came as a result of us making the utmost efforts for each match, sharing a mutual vision to compete, and fighting with great courage. I want the players to focus on the match in front of them and showcase their full potential without being too caught up on the ultimate goal.

DF #3 NAKAYAMA Yuta (PEC Zwolle/Netherlands)
Just as we have improved through this tournament, Spain is also getting better. I am sure they are a different team (since playing in the KIRIN CHALLENGE CUP 2021), and after playing through 120 minutes at the quarterfinals, they showcased their resilience. We have also made challenges in the training sessions and matches to improve ourselves both as a team and as individuals. We will continue to fight with a challengers’ spirit, make necessary adjustments on the pitch, and strive to raise the team’s overall level when we face Spain. We will give our best efforts to prepare ourselves and fight as a team to earn a victory.

MF #6 ENDO Wataru (VfB Stuttgart/Germany)
We are here to win the gold medal, so it feels like we are finally here, but at the same time, I am excited for the fact that we are about to reach a new height. It is great to see the young players win matches while showcasing strong performances under a tough circumstance, intense atmosphere, and great pressure. We just need to win two more matches. Whether or not we overcome this wall will have a major effect on the history of Japanese football. The players on the pitch just need to embrace that pressure and responsibility. By leaving positive results, people can look back and say it was worth cheering for. We will commit to earning results and run to the end.

MF #11 MITOMA Kaoru (Kawasaki Frontale)
We have reached this far because our defence has been stable, while we manged to capitalise on the few opportunities we were given. I hope to make attempts to take on the opponents when we have possession of the ball and try to showcase my strengths. I know I can contribute to the team’s offence if I can receive the ball deep in the opponent’s territory, so I will focus on getting myself involved in the attacking third.

FW #18 UEDA Ayase (Kashima Antlers)
We don’t want to just make history, we want to win the gold medal. In order to achieve our goal, we need to win each match at a time, so we will give our best effort to prepare for our next match, as we are expecting another tough match. Spain is a team with tremendous techniques, and they could completely dominate us in ball possession. However, our strengths lie on our ability to play tenaciously and make wise decisions. We also have wide variety of talents on our team, so we hope to combine those talents to create opportunities and put up an aggressive fight. 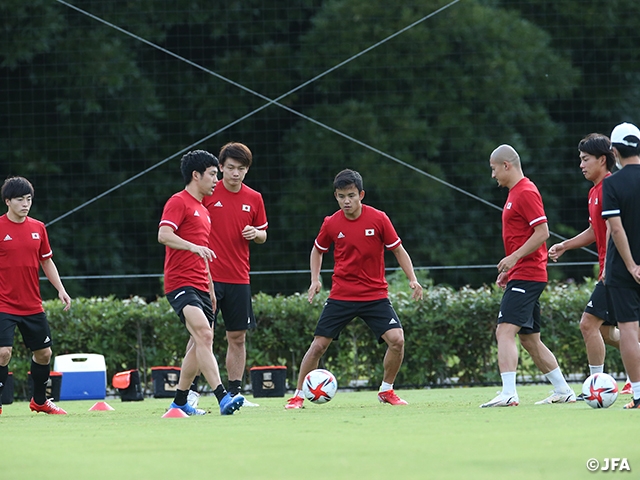