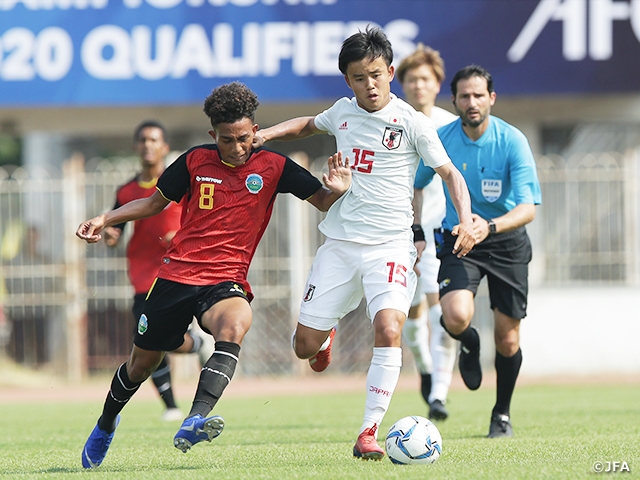 On Sunday 24 March, the U-22 Japan National Team won their second match of the AFC U-23 Championship Thailand 2020 Qualifiers against Timor-Leste 6-0. 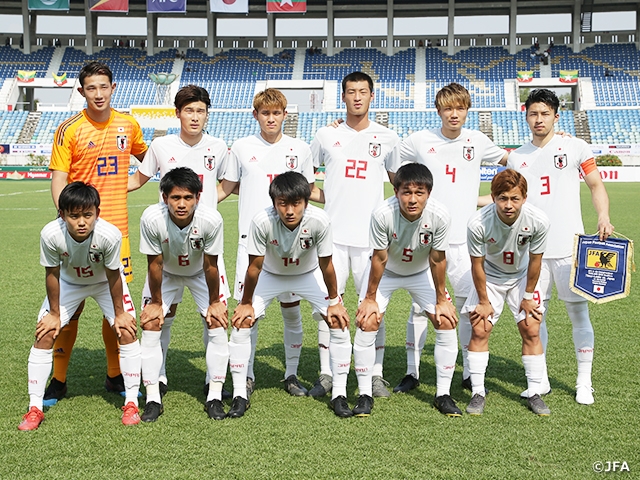 With the team playing their second match in three days under the scorching heat of Yangon, Japan elected to rotate 10 players from their line-up of the first match. The match started with Japan taking control of the ball possession in the early minutes, but as Acting Coach YOKOUCHI Akinobu later reflected, “Timor-Leste is a good team and they didn’t allow us to play freely,” the team struggled to break through the Timor-Leste side led by Coach TSUKITATE Norio who’s dispatched from Japan.

At the 15-minute mark, Japan earned a penalty kick, but the attempt made by Tagawa went over the goal to miss on the golden opportunity to take the lead. However, Tagawa soon redeemed himself as he captured the goal with a header in the 24th minute when the ball was connected from Kubo to Itakura, before the ball was cut back towards the goal to allow the striker to make a diving effort, as he later mentioned, “I was anticipating for that cut back.”

As Coach Yokouchi reflected after the match, “Our opponents came out attacking, which left an opening behind them,” Japan saw more opportunities created in the second half. In the 54th minute, Kubo pierced a direct freekick to the near corner of the goal to make it 2-0. Tatsuta made it 3-0 in the 60th minute from an opportunity created from a corner kick, followed by Itakura’s mid-range shot that captured the goal in the 71st minute. Four minutes later, Kubo controlled a cross delivered from the side before firing a volley shot to make it 5-0. Forward UEDA Ayase (Hosei University), who entered the match as a substitute, capped off the match with a goal scored in the 77th minute to end the match with a final score of 6-0. 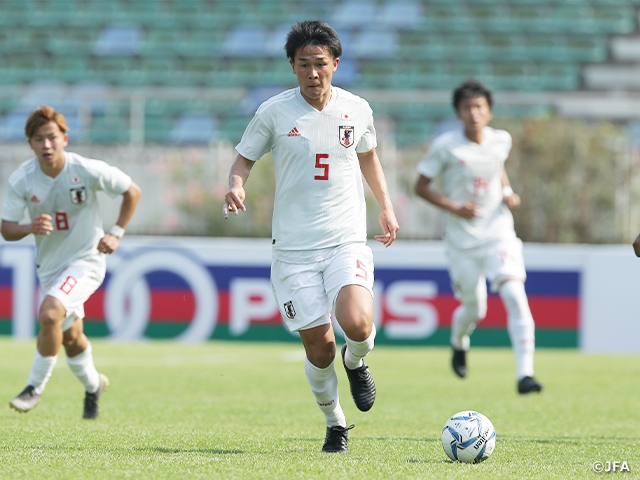 Despite the big win, with Myanmar registering a 7-0 victory over the same opponent, Coach Yokouchi didn’t seem to be satisfied with the result, as he mentioned, “We could’ve scored more goals towards the end. I had to encourage the players to make more efforts and the players had to show more willingness to score goals.”

With two matches completed at the qualifier, Japan will now face the host nation, Myanmar. The match between the two sides with two wins will kick-off at 6 p.m. (8:30 p.m. Japan time) on Tuesday 26.

YOKOUCHI Akinobu, Acting Coach
Similar to our first match, we made it difficult on ourselves with our performance in the first half, but once we refreshed our minds in the second half, we managed to execute our game plans. One of the key-plays we were looking for was to score goals from crosses. Although we saw some crosses delivered during the first half, the quality just wasn’t there. Our main focus ahead of the third match will be on our condition. Even for the players who featured the first match will be playing with just three-days rest, and some hasn’t fully recovered yet, so we must allow our players to recover first. In this type of situation, we wouldn’t be able to make the adjustments through training sessions, so we will hold a meeting to go over our strategy.

DF #4 ITAKURA Kou (FC Groningen)
I was able to score just the way I planned. I will stay eager and anticipate for those opportunities in the future matches. We saw many occasions where we gave up the ball from our own mistakes and we could’ve done a better job to create opportunities for ourselves. It might’ve helped if we moved the ball around with more pace, especially after making those mistakes. However, it was great to see our players winning back the ball after losing possession of it.

MF #3 NAKAYAMA Yuta (PEC Zwolle)
It’s great that we scored many goals, but we still could’ve scored more goals. We also had a few moments where we could’ve conceded a goal, and that’s an aspect we must work on. Although we have been making the efforts to execute our game plan, we still need to heighten the quality of our plays. We hope to communicate with each other and finish off the final match on a high note.

MF #5 SUGIOKA Daiki (Shonan Bellmare)
With the temperature being so different from Japan, it was a tough match for us. I feel like I was able to combine well with Ito and create many opportunities from my crosses. I have been delivering my crosses with clear intentions, as seen in the cross that assisted Kubo’s goal, that was a cross Kubo has been asking me to deliver in our training sessions. Before sending the ball, I was able to get an eye contact with Kubo and deliver the ball just the way I planned. Our next opponent will be a very strong team, so we hope to prepare ourselves thoroughly ahead of the match.

FW #18 TAGAWA Kyosuke (F.C. Tokyo)
In these kinds of matches, the first goal plays a crucial role, so it would’ve been so much better if I was able to score that penalty… It was so disappointing, but it was such a relief when I managed to score soon afterwards. We started to create more opportunities from crosses, and I was anticipating for my chance to convert them. The ball delivered from Itakura was perfect and I am glad I was able to time myself with the cross.