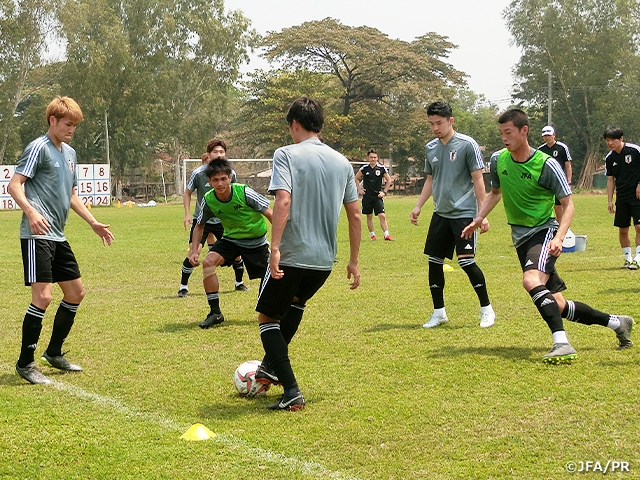 On Saturday 23 March, the U-22 Japan National Team held a training session in the morning, one day after their match at the AFC U-23 Championship Thailand 2020 Qualifiers.

While the starting line-up from the night before and UEDA Ayase who started from the beginning of the second half, remained at the hotel to recover from the match by taking an ice bath and stretching their bodies, the remaining 11 players conducted a training session for about an hour under the scorching sun that rose the temperature close to 40 degrees Celsius. 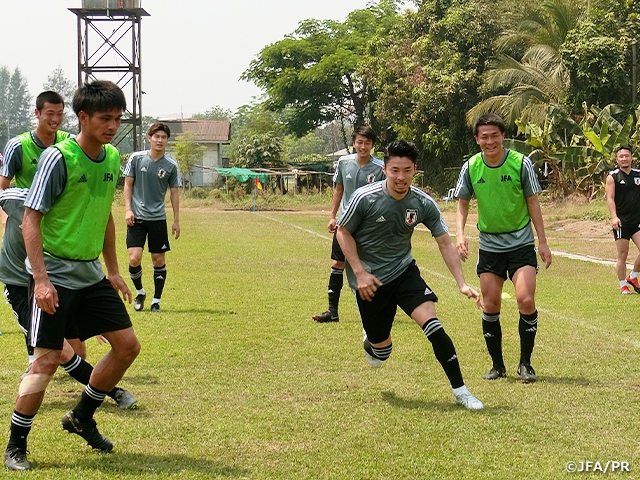 Measures were taken by Conditioning Coach CHUMAN Kentaro and the medical staffs to prepare the players to fight the heat, but most players have already mentioned that they are getting used to the climate in Myanmar. Defender HASHIOKA Daiki who has been featuring in both the U-20 and U-22 Japan National Team shared his take, “Our ability to focus will be challenged. The match will be deeply affected by how much the defenders can stay focused.” Midfielder NAKAYAMA Yuta who entered the match against Macau in the 78th minute spoke of his aspiration, “I still have fresh legs and I hope we can earn another three points,” and continued by saying, “We hope to showcase our usual performance against the opponents who are fighting to earn their spot into the Olympics.”

Japan’s next opponent Timor-Leste is led by Coach TSUKITATE Norio, who is a certified coach of the JFA dispatched last May to coach the top team and the U-23 National Team. Coach Tsukitate has the experience to coach the national team at Guam, Laos, Bhutan, and he has also coached the U-16/U-19 National Team at Timor-Leste from 2011 to 2014. Despite losing to Myanmar 0-7 in their first match, the coach shared his aspiration to “Win a match at this qualifier.”

The U-22 Japan National Team will face Timor-Leste in their second match at Thuwanna Stadium with a kick-off time of 3 p.m. on Sunday 24. 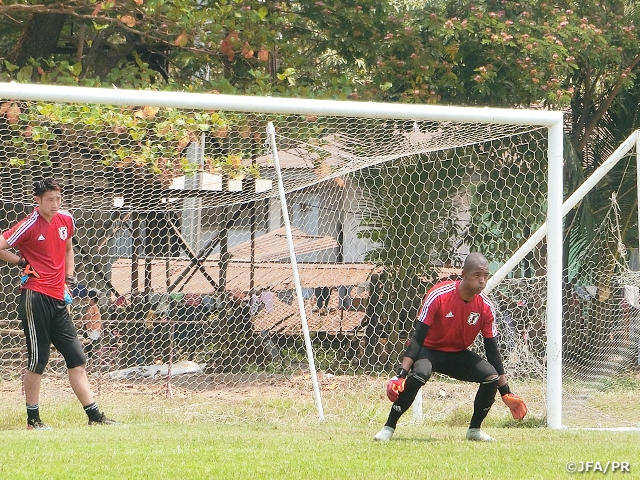 DF #22 TATSUTA Yugo (Shimizu S-Pulse)
When the opponents are dropping deep, it is important for the defenders to stay focused and keep on applying the pressure while making sure we cover ourselves. After watching the first match from the bench, we shared our thoughts on how the defence should position themselves and we hope to implement those ideas in our upcoming matches. We hope to stay on the same page and enter each match as a team.

MF #8 ITO Tatsuya (Hamburger SV)
I have always strived to play a central role at the Olympics, ever since it was determined that Tokyo was going to be hosting the Summer Olympics in 2020. I was never selected into the youth categories of the national team, but I am now happy and honoured to be able to represent Japan. Everyone is striving to feature the Olympics, but there are limited spots available. Each day, each training session is an opportunity to prove myself to earn a spot into the squad. The climate in Myanmar is extremely hot, and I struggled to perform well in the first two days, but now I am used to the heat. We lacked quality in the first half of our first match due to the weather and the pitch condition. I will keep that in mind and stay keen to get myself involved in our goals from the first half when I am given the opportunity.

FW #18 TAGAWA Kyosuke (F.C. Tokyo)
I was watching the first match from the bench and despite seeing our team struggle against the opponents in the first half, we had a positive vibe that we would eventual score goals. Our next opponent, Timor-Leste will also be dropping deep to defend, so our quality of plays will be questioned in the match. I hope to keep my touches minimum to change the rhythm of our attacks, anticipate for the vertical passes, and stay keen to respond to the loose balls upfront. I must be eager to score goals and enter the match with a strong intention to earn results.