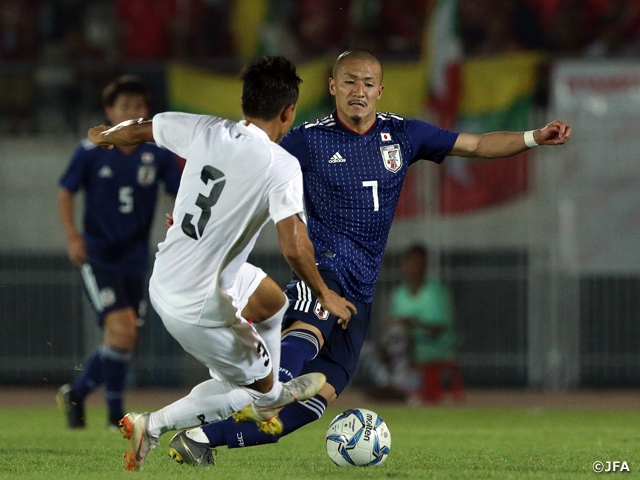 On Tuesday 26 March, the U-22 Japan National Team played their third match of the AFC U-23 Championship Thailand 2020 Qualifiers against the host nation, Myanmar and won the match 7-0. 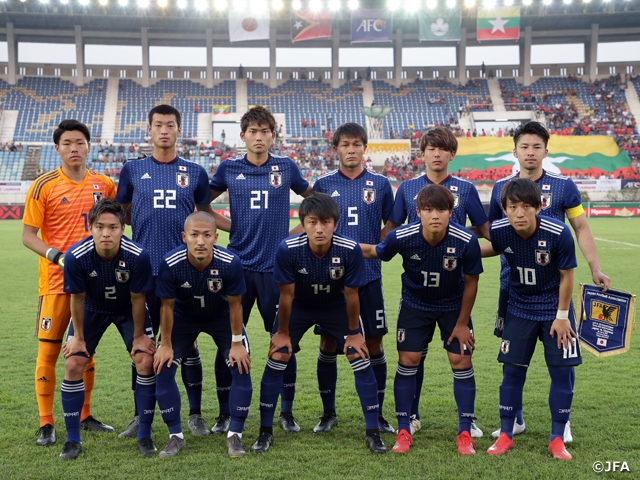 Compared to the previous two matches where Japan faced opponents who dropped deep in their territory to defend the goal, the host nation came out aggressively to apply numbers in their offence while keeping a high defence line. With the two offensive minded teams clashing, it was Japan who took the initiative of the match.

Despite getting their first opportunity judged no-goal with an offside call, Japan captured the opening goal in the seventh minute, when Miyoshi intercepted the pass delivered by the opposing goalkeeper before sending the ball to Maeda. The Japanese striker took on the goalkeeper one-on-one and slotted the ball into the net. Just two minutes later, Maeda responded to a long feed delivered by Nakayama to break through the opposing defence line and registered his second goal of the match, giving Japan the commanding lead.

In the first two matches, the Japanese players struggled to deal with the scorching heat, but their final match was played at night time, giving them no worries about running out of gas. In the 18th minute, Iwasaki responded to a through ball sent by Miyoshi to capture the team’s third goal, followed by Nakayama’s goal in the 38th minute, and Maeda completed his hat-trick in the 44th minute to make it 5-0 at halftime.

With the crowd’s support on their back, Myanmar came out attacking fiercely in the second half, as one of their shot struck the Japanese cross bar in the 65th minute. While the Japanese defence showed their persistency to keep the clean sheet, Iwasaki pierced a volley shot in the 69th minute to further extend the lead. Nakayama capped off the scoring spree by marking the team’s seventh goal in the 79th minute with the assist from KUBO Takefusa (F.C. Tokyo). As a result, Japan registered three consecutive wins to top Group I and earned their spot into the AFC U-23 Championship Thailand 2020. 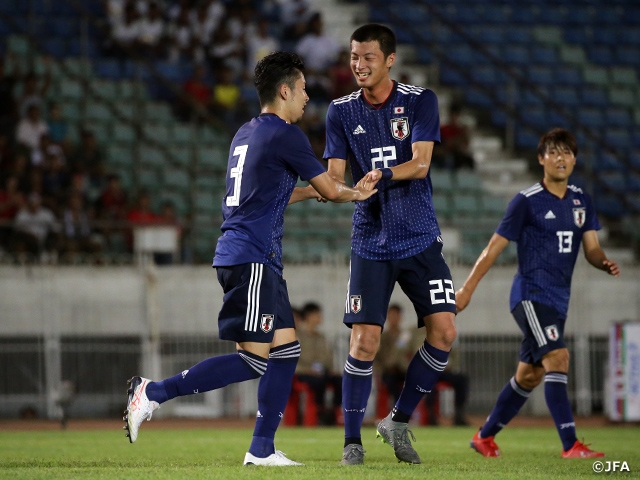 After the match, Acting Coach YOKOUCHI Akinobu reflected on the match, “We could have won the league with a draw, but I told my players to focus on winning the match. Despite the match result, Myanmar was a very strong team. It was certainly a difficult match, but the players did a great job to showcase their willingness to win the match.” The AFC U-23 Championship will take place at Thailand in January, and for all the teams except for Japan, the tournament will serve as the final qualifiers for the Tokyo Summer Olympics 2020.

All competitions in other groups also completed on this day, as Korea Republic, Vietnam, and the defending champions Uzbekistan secured their spot into the main tournament.

YOKOUCHI Akinobu, Acting Coach
Ahead of this match, we reaffirmed our style of football as a team. We weren’t expecting to score this many goal, but it was a result of our players executing our game plan for the entire 90 minutes. Playing three matches with one day rest per match in this weather, it's easier said than done. I am very grateful for the players and staffs for all their efforts to heighten and maintain the conditions of the players. At the main tournament in January, the final tournament will be played after the group stage, so an even tougher competition awaits the players, but for now, I am just glad that we earned our ticket to the tournament.

MF #3 NAKAYAMA Yuta (PEC Zwolle)
With just one day rest in between our matches, we managed to give our best team effort to win all three matches. We were also able to show improvements over the three matches. (Reflecting on his second goal of the match) I knew what Kubo is capable of doing, so I made my run believing he would send me the ball, and just as I thought, he delivered the perfect pass. After scoring that many goals in the first half, we knew our opponents were going to attack aggressively in the second half. We still need to do a better job in managing those kinds of situations and share the same game plan as a team.

FW #7 MAEDA Daizen (Matsumoto Yamaga FC)
I am glad we won the match and with this being my first hat-trick after I turned pro, I am very happy about that too. Myanmar came out with a very high defence line, so I was anticipating to exploit the space behind them. Miyoshi has always kept an eye on me, so whenever he had the ball, I made my runs into the space. I was also focused on applying pressure on the opposing goalkeeper. It’s something I always do in Japan to make the goalkeeper rush their plays. With this being an international match, the opposing goalkeeper didn’t know me and seemed to be surprised when I made the move. In that sense, I feel like I was able to showcase my character in this match. Our goal was to win three matches, regardless of the performance, so I am just glad that we were able to achieve that goal.