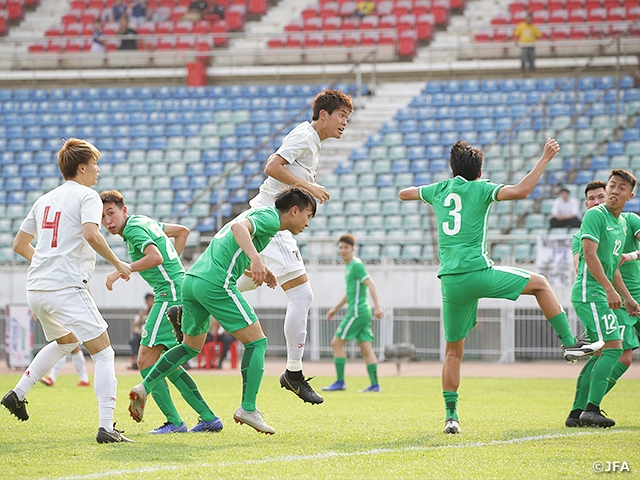 On Friday 22 March, the U-22 Japan National Team played their first match of the AFC U-23 Championship Thailand 2020 Qualifiers against Macau and earned an 8-0 victory. With the AFC U-23 Championship serving as the qualifiers for the Tokyo Summer Olympics 2020, the competition will provide Japan with a precious opportunity to build on their match intuition, despite already clinching the Olympics as the host nation. 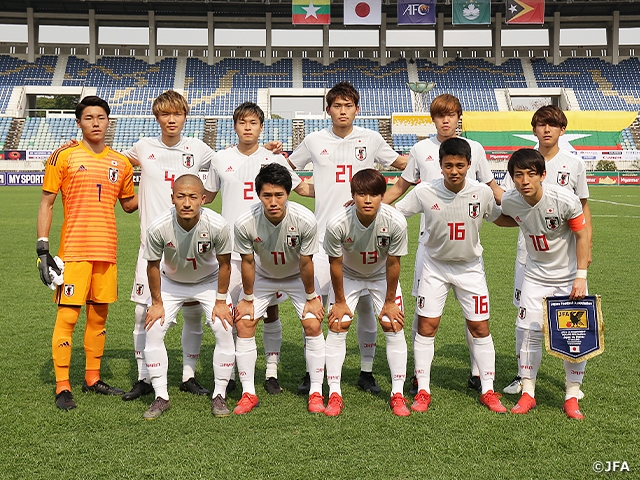 The match kicked-off at 3 p.m. at Yangon, Myanmar under the scorching sun. Despite the tough climate, Acting Coach YOKOUCHI Akinobu reminded his players that they cannot use that as an excuse. However, the Japanese players were clearly affected by the weather, as they struggled to create much opportunities against the Macanese defence line who dropped deep in their own territory. Although the match saw Japan breaking through the flanks in many occasions, none of the plays developed into a goal scoring opportunity, as Endo later reflected, “We weren’t able to connect at the final third.”

Despite entering halftime scoreless, Coach Yokouchi remained calm as he mentioned “We knew it was going to be a tough first match,” and that the scoreless first half was “Within our exectations.” During halftime, the team brought in UEDA Ayase (Hosei University) in place for Saito to add another player upfront. The Japanese coach sent off his players by mentioning, “Its’ still 0-0 and we haven’t conceded a goal yet,” and “We just need to initiate more actions and make more runs.”

The second half saw the Japanese players responding to the coach’s words as they showcased more aggression from the early minutes. The opener came in the 51st minute, when the 190cm defender, Machida responded to a corner kick delivered by Miyoshi to strike a header into the net. Following this goal, the floodgate was opened for Japan, as Macau’s Coach ION CHO IENG later responded, “That goal changed everything.”

With full momentum on their side, Japan captured their second goal in the 54th minute when Ueda met with Maeda’s cross, followed by another goal scored by Ueda in the 60th minute. Endo scored the fourth goal for Japan in the 67th minute when he struck a shot from distance following a corner kick. While Maeda marked a brace with his goals scored in the 69th and 72nd minute, Ueda completed his hat-trick with his 70th minute goal. It was Itakura who capped off the match with his goal scored off the assist of KUBO Takefusa (F.C. Tokyo) in additional time to finish the match with a final score of 8-0. 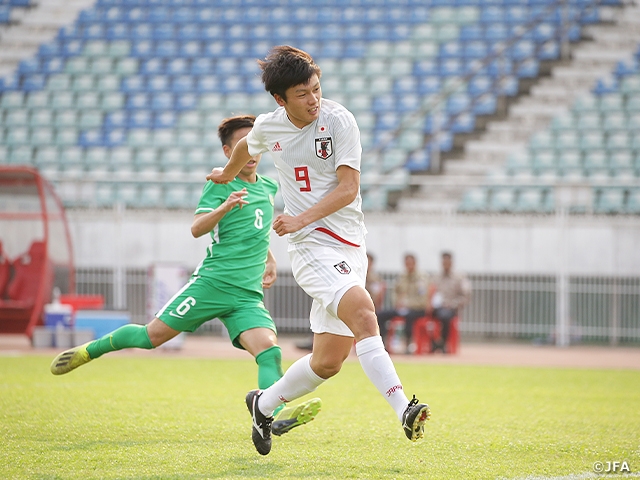 The U-22 Japan National Team will now face Timor-Leste on Sunday 24.

YOKOUCHI Akinobu, Acting Coach
Although we were expecting a tough match, the first half has certainly reminded us how hard it is to enter a tournament. However, our players did a fine job to find the space in the congested goal area to score goals in the second half. That first goal we scored off a set-play turned out to be a huge play for us. Although it would’ve been ideal if we could’ve scored from an open play, that goal has certainly brought us the momentum and our usual ball movements. We came prepared to play under this environment, so we can’t use that as an excuse, but I am fully aware that our players are playing under excruciating heat. I just hope that they can get used to it as we play the matches. It’s not that Saito was playing bad, but I just wanted to change the dynamics of our attacks by having Ueda play along with Maeda upfront. It turned out that Ueda gave enough space for Maeda to play more freely, so it worked out well.

DF #21 MACHIDA Koki (Kashima Antlers)
With our opponents dropping deep in their territory, I was thinking that the only way we can score is from a set-play. I am glad I was able to win the ball in the air and score the goal. It’s been a while since I have been called up to the national team, and it means a lot for me to be able to score a goal. I was also really looking to keep a clean sheet, so I am glad to accomplish that goal as well. We must continue on this trend and keep clean sheets in our next two matches. During halftime, we kept telling each other to “Remain calm and play with composure,” and I think that is the key for us in the upcoming matches.

MF #11 ENDO Keita (Yokohama F・Marinos)
I was able to create opportunities from my dribbles in the first half, but I had to be able to deliver better crosses. Despite making numbers of attempts, I wasn’t able to assist any goals, so that is definitely an area I must work on. We will be facing many teams like today in the Asian qualifiers and Coach Yokouchi has told me to attack them with my dribbles. I can’t remember the last time I scored a goal and it felt so good to score one today.