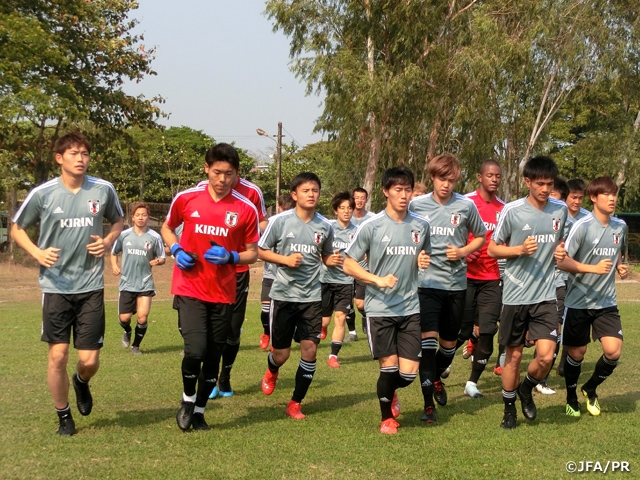 On Tuesday 19 March, the U-22 Japan National Team entered their second day in Myanmar, where they are training ahead of the AFC U-23 Championship Thailand 2020 Qualifiers.

With the temperature in Yangon being 10 degrees above what it was in Japan, the team spent their time before lunch taking a walk around the hotel. The players were then gathered for a meeting to share the team’s goal, concept, and schedule to be on the same page. With less than 500 days ahead of the Tokyo Summer Olympics, midfielder MIYOSHI Koji shared his take, “It gave us perspective on our path to the Olympics and made us realise that we don’t have any time to waste. It’s an important aspect we must keep in mind both as a team and as an individual.” The team is scheduled to participate in many international friendly matches and tours abroad this year, and the AFC U-23 Championship scheduled in January 2020 will serve as a crucial preparation tournament for the Olympics.

During the meeting, Acting Coach YOKOUCHI Akinobu emphasised the merit of having Coach MORIYASU Hajime as the head coach of both the SAMURAI BLUE (Japan National Team) and the Olympics National Team. The two main focal points for the U-22 generation are the Olympics and the FIFA World Cup Qatar 2022. With Coach Moriyasu monitoring a broader pool of players both at the national team and the clubs, it gives the players more opportunities to be seen by the coach.

On this day, the team held their training session at 3 p.m. to simulate their kick-off time of the first match. Under the scorching sun, the players went through their warmup routine before going over drills with the ball. Each player was set with different work load, due to the difference in the playing time with each club. The players were seen working up a sweat by going over possession and shooting drills before concluding the session.

The two players from the Netherlands arrived at Yangon in the evening, as NAKAYAMA Yuta and ITAKURA Kou joined the team. Soon after arriving, the two went through a separate training menu with Conditioning Coach CHUMAN Kentaro. With the two joining the team, all 23 players of the U-22 Japan National Team have arrived at the match site ahead of their official training session scheduled on Wednesday 20, where they will conduct a training session at the match venue. 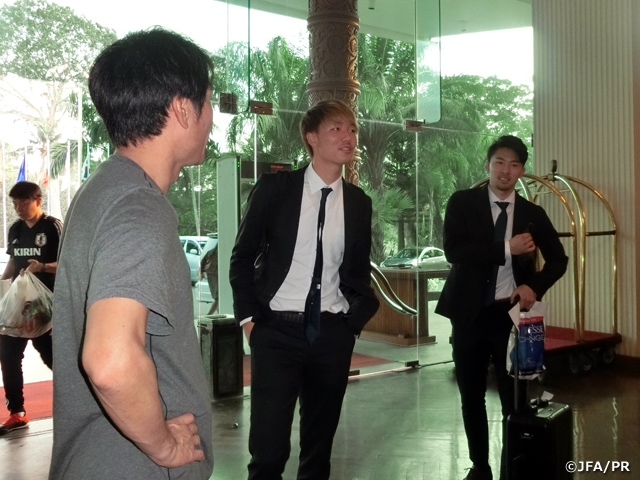 DF #14 HARA Teruki (Sagan Tosu)
Everyone on this team knows their responsibilities and that we are going to defend as a team. In terms of offence, we must heighten the overall quality, including the passes from the defence. It helps that we are aware of each of our characters, so we hope to polish our combinations and the details of our plays. Recently, I have been able to get used to my new club and gain more match experience, so I hope to make up for the half-year I missed (due to injury) and prove that I belong here. With less than 500 days until the Tokyo Summer Olympics, it certainly feels like we don’t have much time left, especially after going over the remaining schedule. I must first become able to play in the matches. I might not be the flashiest player, but I can contribute for the team as a backseat player, so I hope to help out the team in both the national team and my club.

MF #10 MIYOSHI Koji (Yokohama F・Marinos)
Now that all the players are here, we can focus on preparing ourselves ahead of the tournament. Although there are some new players, with most of the players playing constantly, there is a positive vibe surrounding the team with good amount of competition. I personally have been able to keep my condition and game intuition by playing regularly at my club. Mentally, I am feeling the joy of playing each match and getting called to the national team. Our highest priority here is to win three matches and to gain momentum ahead of the AFC U-23 Championship. We will prepare ourselves within the tough environment so that we can showcase a good performance. The line-up is yet to be determined, so we hope to heighten each other through the competition among the team, including those who are not in the squad for this tournament. Ever since Tokyo was named as the host for the Summer Olympics, time has gone by so quickly. I am now realising the importance of each and every training session, more than ever.