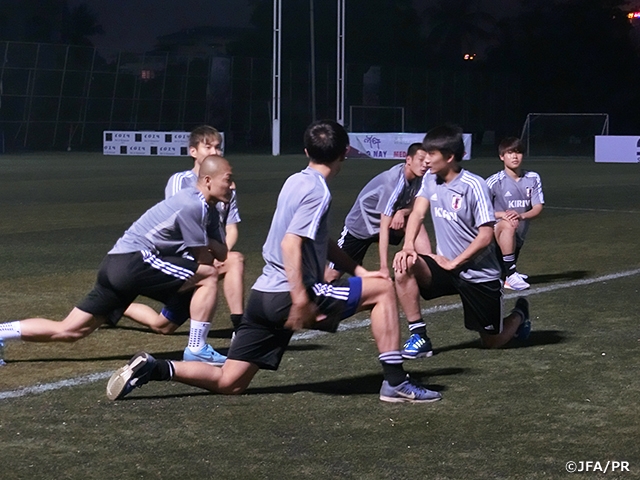 On Monday 18 March, the U-22 Japan National Team arrived at the tournament site in Myanmar where they will participate in the AFC U-23 Championship Thailand 2020 Qualifiers.

Following their J. League matches on Sunday 17, the players gathered to take an eight our flight to Yangon on the following day. Once arriving to the tournament site, the players got together at 7:30 p.m. to hold a training session under a 29-degree Celsius weather with high humidity, where they took a light jog and stretched their bodies to work up a sweat. Later that night, players who participated in the DENSO CUP SOCCER Annual Korea vs Japan University Football Match as a member of the All Japan University Select Team arrived at the team’s accommodation, as OBI Powell Obinna and UEDA Ayase joined the team. The team is still without ITAKURA Kou and NAKAYAMA Yuta who are late due to a flight delay. 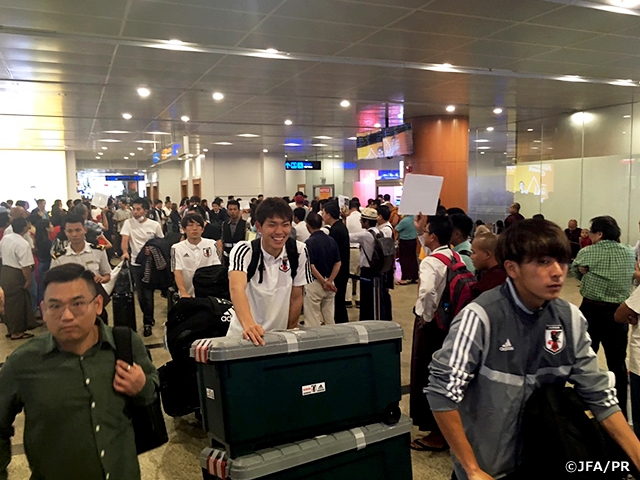 The team will be entering the qualification round of the AFC U-23 Championship Thailand 2020, which will serve as the qualification round for the Tokyo Summer Olympics 2020. Japan is in the same group as Myanmar, Timor-Leste, and Macau, with their first match scheduled on Friday 22. The temperature in Yangon can reach over 35 degrees Celsius during this season and the matches are scheduled to kick-off at 3 p.m. in two of the three matches. The team must get used to the scorching heat in the next three days. 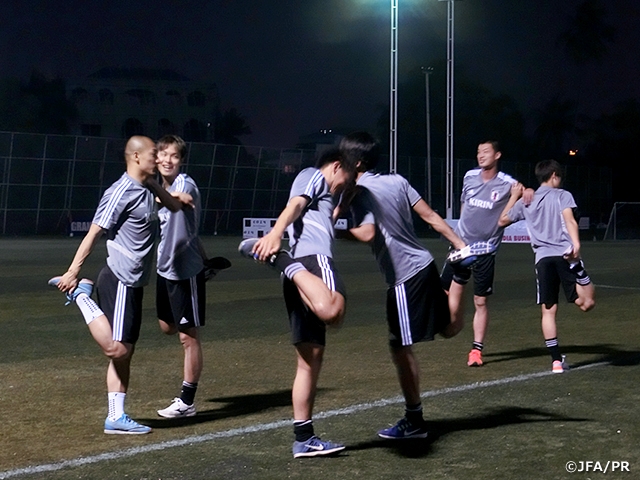 YOKOUCHI Akinobu, Acting Coach
We must win our way through to earn our spot into the AFC U-23 Championship. Thus, our top priority will be winning the matches. In terms of team selection, we have a few players who are called-up to the top team, but I feel like we managed to select the best we can. It’s been a while since we played as a team, and we have new faces, so we must go over the team concept ahead of our matches. The weather and the match schedule are going to be really tough, but we must endure the circumstance. Weather-wise, this will give us a great opportunity to simulate the Tokyo Olympics, so we will think of it in a positive way and utilise this experience to our advantage.

MF #16 SAITO Mitsuki (Shonan Bellmare)
Our mission as the Japan National Team is to come home with three wins. My ability to force turnovers and making the runs upfront are my strong points. I feel like my performance at the club has been assessed and the team is expecting me to perform at a high level, so I hope to fulfil that expectation.