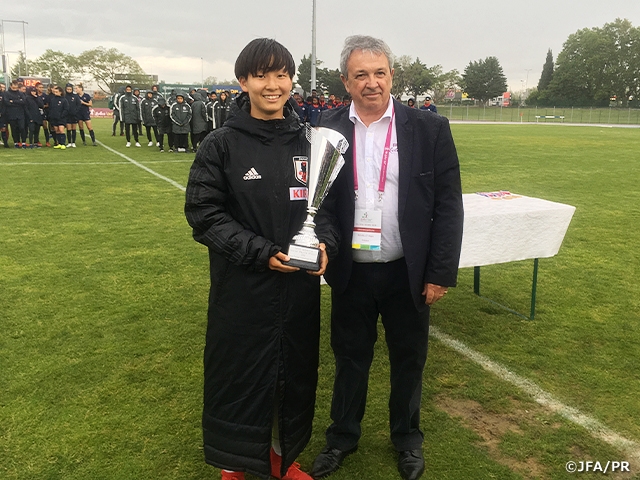 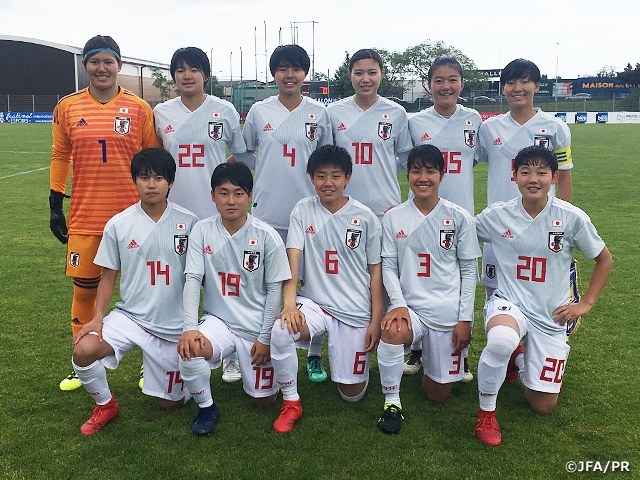 Japan’s final match of the tournament was against the host nation, France, who were in first place after the four fixtures. In order for Japan to win the tournament, they had to win over France and hope for the other fixture to go in their favour, but the Japanese players entered the match to finish the tournament on a high note, no matter what. In the early minutes of the match, Japan applied aggressive pressure from their front line to create opportunities. In the fifth minute, they forced a turnover in the midfield to allow NAKAO Momo to send a through ball upfront. It was OSAWA Haruka who responded to this delivery, but their timing was slightly off to create any threat. Another opportunity was created in the 23rd minute, when TAKEDA Nanako responded to the through ball sent by Osawa, her attempt at the ball was called offsides. With both teams showing great persistency in defence, the match entered halftime scoreless.

Despite their struggles in the first half, Japan managed to score their first goal in the early minutes of the second half. The goal came in the 51st minute, when TABATA Haruna intercepted the opponents’ pass and sent the ball upfront. It was Osawa who received the pass before taking on the opposing defenders and struck a shot from distance. The shot taken by Osawa sailed over the head of the French goalkeeper and shook the net. The home side responded by applying more pressure upfront to rally back, but with the fine plays showcased by the Japanese goalkeeper TANAKA Momoko, Japan managed to hold onto their lead to win the match with a final score of 1-0. After all the fixtures were completed, Japan finished the tournament as the runners-up, and they were awarded with the tournament’s Fair-play award.

GK #1 TANAKA Momoko (Yamato Sylphid)
This match against France was our final piece of this tour. We entered the match with the intention to leave nothing behind and show our commitment to win the match. We focused on what we have been working on as a team and displayed our willingness to score goals and win the match. I personally saw many aspects I need to improve on, but the fact that we won this competitive match has given me the confidence to move forward. We ended up as the runners-up with our lost against DPR Korea, but we will make sure to pay them back at the AFC U-19 Women’s Championship.

DF #22 TABATA Haruna (Cerezo Osaka Sakai Academy)
We entered today’s match with the intention to give our very best efforts. In the early minutes of the match, we struggle against the opponents dropping deep in their territory, but we managed to create more opportunities by utilising more long balls. In terms of defence, we showed great efforts until the final whistle, and managed to keep our focus throughout the match. It’s great that we were able to finish up the tournament on a high note, but it’s still disappointing that we couldn’t win the title. Through this tournament, I saw plenty of room to improve, so I will continue to work hard in my daily trainings to become a better football player.