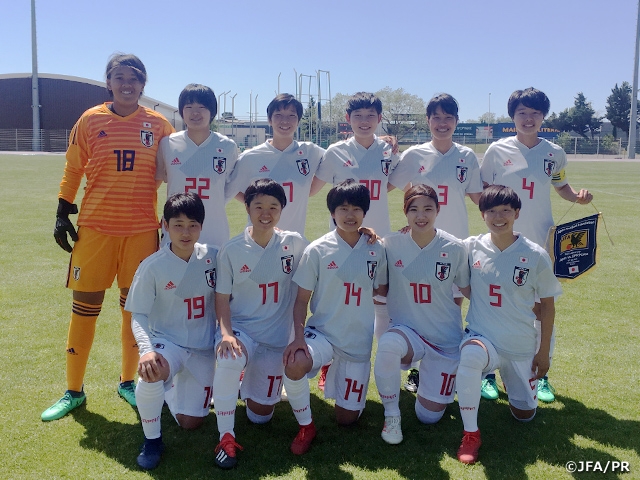 In the match between the two Asian sides, it was DPR Korea who took the initiative. While Japan was forced to be in the defensive end in the early minutes of the match, their first offensive opportunity came in the 19th minute, when OSAWA Haruka connected with a cross sent by KANNO Oto to strike a header, but her attempt sailed wide of the goal. Just before the end of the first half, DPR Korea scored the opening goal from a corner kick to enter halftime with a 1-0 lead.

With the match being played under a very windy condition, the Japanese players struggled to find their rhythm. In order to change the dynamics of the match, Japan brought in GOTO Wakaba for MIURA Haruka in the 61st minute, followed by another substitution made in the 64th minute to bring in KOJIMA Seira for TAKEDA Nanako. Japan finally picked up their pace after the 75th minute mark, as a close opportunity was created by MORITA Misaki in the 78th minute, but her cross couldn’t connect with her teammates in the box. In the 80th minute, Japan forced a turnover in the midfield to initiate a short counter, but the shot taken by Kojima went over the crossbar. In efforts to level the match, Japan continued to attack, but fell short from scoring the equaliser, as the match ended with a final score of 0-1.

GK #18 CHIKAZAWA Rena (Waseda University)
Before entering our match today, we thoroughly went over our game plans against DPR Korea’s offence and defence. Despite the strong wind, I feel like we managed to keep our composure and stay focused throughout the match. Among the three matches we’ve played, I think we were able to communicate the most in today’s match. However, it was very disappointing that we couldn’t earn the win. I know what our tasks are as a team and as an individual, so we will make the necessary adjustments to win the remaining two matches.

MF #19 MORITA Misaki (Okayama Sakuyo High School)
The wind was blowing so strong from the first half, and we struggled to move the ball around as we planned. I personally made some mistakes and lost the physical battles, so this match has given me many tasks to work on. The fact that we conceded a goal from a set-play tells us that we need to improve on that aspect. We must learn from this loss and make the adjustments to win the remaining two matches.