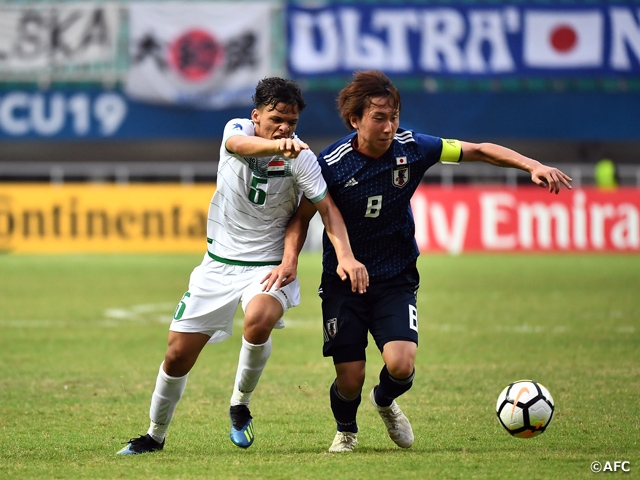 On Thursday 25 October, the U-19 Japan National Team faced the U-19 Iraq National Team in their final group stage match of the AFC U-19 Championship Indonesia 2018. The match was welcomed by a sudden downpour during warmups, but the rain stopped just before the start of the match. 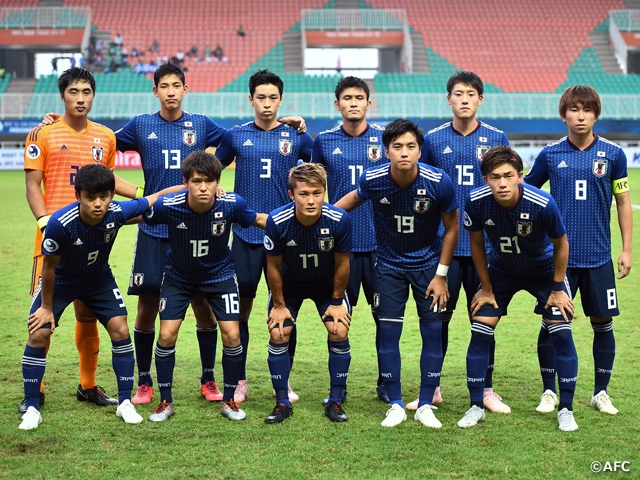 In the third minute of the match, Japan earned a freekick, deep in the opponents’ territory. The delivery from this set play was deflected by the Iraq defenders and triggered a counter attack. The ball was carried all the way into the Japanese penalty area, and came close to capturing the opening goal, but Osako made a superb save to deny this opportunity. The Iraq side showed great intensity from the beginning of the match as they still had a chance to advance into the knockout stage depending on the outcome of the match between Korea DPR and Thailand. Japan responded against the high-pressing opponents by connecting short passes to take control of the match. In the sixth minute, Kubo delivered a through pass to free up Tagawa, but his run was called offsides. Kubo created another opportunity in the 13th minute, this time delivering the cross to Taki, who made a run at the far post to convert the opportunity to give Japan the opening goal. Tagawa and Yamada combined well in the 24th minute, as they managed to break through the Iraq defence line, but the shot taken by Tagawa struck the crossbar. Japan’s second goal came in the 27th minute, when Ogiwara received the ball upfront and delivered a grounder towards the centre. Kubo made the run from the opposite side and dummied the ball to allow Tagawa to strike the ball unmarked, as his shot went into the net to give Japan a 2-0 lead. A similar play gave Japan their third goal in the 34th minute as Tagawa dummied the cross delivered by Ishihara to allow Hara to convert this chance, sending the match into half time with Japan leading Iraq 3-0. 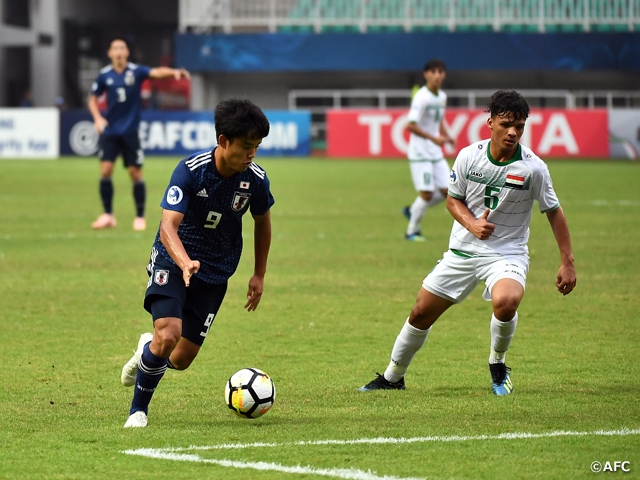 Japan continued to take the initiative in the second half, as they came close to scoring more goals in the 48th and 56th minute from crosses delivered from both flanks. In the 60th minute, SUGAWARA Yukinari (Nagoya Grampus U-18) replaced Kubo, as he formed the three-man defence line along with Kobayashi and Seko. This change in formation allowed Ishihara and Ogiwara excel at the flanks. More substitutions followed as SAITO Mitsuki (Shonan Bellmare) and SAITO Koki (Yokohama FC Youth) were brought in at the 63rd and 76th minute mark respectively. The substitutions allowed Japan to shift their formation upfront to add more layers in their offence. In the 78th minute, Hara struck a towering header to capture the team’s fourth goal of the match off of a corner kick. Japan added another goal in the 85th minute as Ogiwara broke through the left flank and delivered the ball to Saito Koki, who capitalised this opportunity to score in three consecutive matches at the group stage. The Japanese side managed to keep a clean sheet to lock up their third consecutive victory, as they cruised through the group stage by scoring a total of 13 goals while allowing just 3.

The U-19 Japan National Team will now enter the knockout stage as they will face the host nation, U-19 Indonesia National Team on Sunday 28 October with the advancement to the FIFA U-20 World Cup at stake.

KAGEYAMA Masanaga, Coach (U-19 Japan National Team)
Q：Please reflect on the three matches.
A：We kept communicating with our players on how to control the match and keep our composure. The players did a great job to stay vocal in today’s match.

Q：The forwards has all scored a goal. What do you make out of it?
A：They are all performing so well that it makes it hard for us to decide who to start the match. It is a great thing that everyone is maintaining a high-level of motivation, while staying in great form ahead of each match. They were well aware of the characters of the Iraq defence and made actions according to the flow of the match, especially Tagawa and Hara. Not to mention, it wasn’t just them, but the players who created the opportunities were well on top of the situation as well. The combinations among the players have improved increasingly over the matches.

Q：Looking at the squad, many of the players play an offensive role in their club teams?
A：I have coached these players since the U-18 category, so I am well aware of their abilities. Now that they are playing as professionals, they maybe asked to play in different positions depending on their team’s strategy, but they have no problem playing in the positions they are given.

Q：The defence seemed to have created a block to defend against the opponents today?
A：That is one of the adjustments we made following the previous two matches. When we create a block, we must be able to manage the risks of getting the space behind us exploited. In today’s match, our defence did a great job to manage the line while the defensive midfielders communicated well to make collective efforts.

Q：You managed to get through the group stage in good shape, what is your thought ahead of your next match against Indonesia?
A：The players have done an excellent job up until this point. However, we have not achieved anything yet. We have incurred many tough experiences in the past tournaments. As soon as the match was over, the staffs have been working to recover the players’ conditions. Indonesia has played their match yesterday, and the stadium should be packed with the local fans in the match against us. We must prepare ourselves so that we can showcase our best performance under such circumstance.

Q：What is your impression of the Indonesia team?
A：I have the impression that they are a very tough team. Although they lost the match, they showcased an extreme persistency in the second match, while in their third match, they outran their opponents despite being a man down. We must prepare ourselves well to face them.

Q：The fact that you managed to experiment with the three-man defence line during the match was huge for the team?
A：That is our strengths. Because these players have played in many leagues and under many coaches, they have the experience of playing in many strategies and tactics. All I have to do is to gather those players who are aware of the game plan and give them small tips. The rest is executed by the players. This is made possible by the efforts of the Japanese football community as a whole. The players are developed by the community and it allows them to make the necessary adjustments at the national team level.

GK #23 OSAKO Keisuke (Sanfrecce Hiroshima)
I wasn’t able to play in the past two matches, but I was prepared to play when my name was called up. I am glad that I was able to play up to my full potential in this third match and managed to keep a clean sheet. We knew our opponents were going to attack aggressively from the front line and that they were going to utilise the long balls often, so we kept our defensive line at a high level. Although we gave up a critical opportunity to our opponents in the early minutes of the match, I was calm and ready to respond to the situation. Every player on this squad are making themselves ready to play at all times. Just 11 players will be given the opportunity to start the match, but we will all support each other so that we can make a deep run into the tournament.

DF #3 KOBAYASHI Yuki (Vissel Kobe U-18)
I was given my first start of the tournament today, and I am glad I was able to help my team earn their first clean sheet. We kept communicating among the defence line and the goalkeeper on how to respond to the space behind our line, and we managed to respond well. However, we could have done a better job to deflect the long balls. Our opponents were playing for their spot into the knockout stage, so they came out playing very aggressive, but we managed to score our goal in a good timing. I think we were able to control the game very well as a team. Our goal is to win the title, but for now, we must focus on the match ahead of us. It is a big game with lots at stake, so we will prepare ourselves well ahead of the match.

MF #16 TAKI Yuta (Shimizu S-Pulse)
(Regarding the opening goal) Kubo delivered a perfect ball, so I just had to connect with it. Even though I managed to score a goal today, I am not satisfied with my performance. I need to get myself more involved in our plays. In our next match, I will continue to give my best, while I try to improve on what I lacked today. The team must also improve from today, so we will utilise the next couple of days to prepare ourselves ahead of our match against Indonesia.

MF #19 YAMADA Kota (Yokohama F・Marinos)
We all entered the match to fight hard against the Iraq side who will be fighting for their survival. As a defensive midfielder, I focused on collecting the loose balls, winning the fifty-fifty situations, and all the other defensive aspects. Although my main focus was in defence, I also tried to make myself available in our attacks and showcase my ability to initiate our offence. Playing in this tournament has given me a sense of responsibility. A responsibility to play for may team, teammates, and all the other players who couldn’t be here to play. In today’s match, I think that the entire team managed to play as one. That is why the team is surrounded by a great atmosphere right now and everyone is showing their strong willingness to win this tournament. We will fight through the remaining three matches with this positive vibe and take home the title.

FW #11 TAGAWA Kyosuke (Sagan Tosu)
I still need to make more runs to exploit the space behind our opponents and utilise my body to win the balls upfront. In our upcoming matches at the knockout stage, those types of plays will be needed for my team, so I will do my best to contribute to the team. In our next match against the host nation, the stadium should be packed with the opposing supporters, but I have experienced such situation at the J. League, and that whole idea gives me great motivation to perform well. I would like to be the difference maker in our next match.

FW #13 HARA Taichi (F.C. Tokyo)
In the scene where I scored the first goal, I was able to visualise the entire play in the moment I received the ball. I am glad I was able to strike the ball just where I wanted. In the second goal, I told Saito to send the ball towards the near post, and he delivered a perfect ball to make that play possible. Even though I managed to score goals today, I still could have scored more goals, so I must heighten the quality of my plays. A single goal will have more meanings in the upcoming matches, and I hope to score the deciding goal that can lead the team to victory. I hope to win the title with this team.