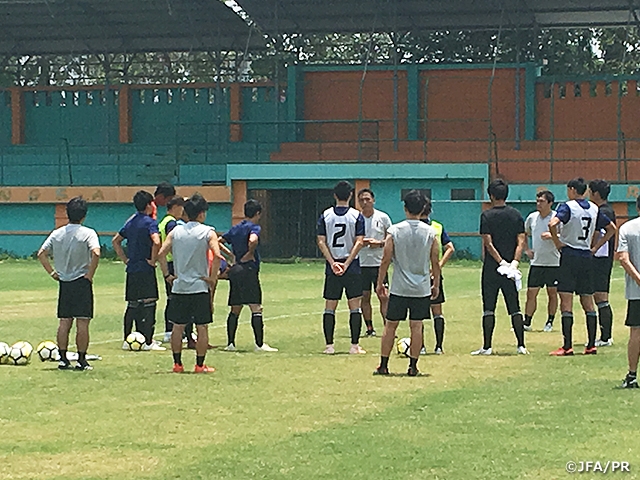 The U-19 Japan National Team won their first match against Korea DPR 5-2 at the AFC U-19 Championship Indonesia 2018, which kicked off its action on Thursday 18 October.

During the group stage, the teams are scheduled to play each match with two-day rest. Thus, the players must recover from the match as soon as possible while the unused reserve players must also maintain their conditions during this time. One day after their first group stage match, the Japanese side conducted a morning training session on Saturday 20. The players who played in the match were seen utilising the facilities of the hotel to recover their body, as their session concluded with a just light workout.

The reserve players on the other hand, including those who were given limited playing time on the pitch, were seen working up a sweat at the training field. As the team’s staffs all mentioned that “Today is the hottest day since arriving to Indonesia,” the temperature at the training site at Bogor, Indonesia rose over 30 degree Celsius. 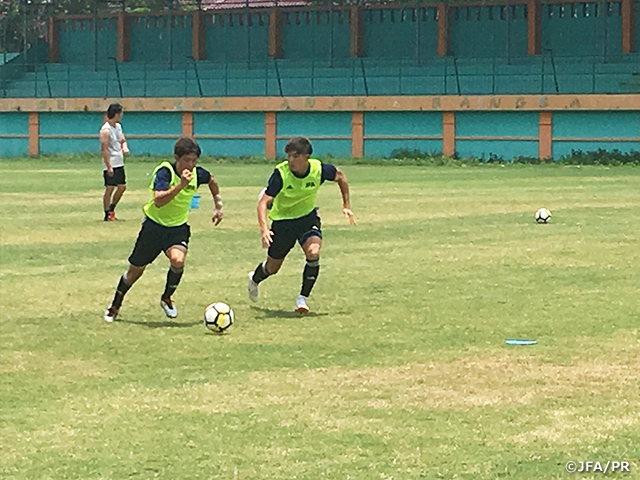 The team went through drills to go over their feel of the ball, followed by one-on-one drills. Players showcased great competitiveness in these drills as the session progressed under a great atmosphere. The session concluded with a half-court 5-vs-5 scrimmage. Coach KAGEYAMA Masanaga demanded the players to heighten the quality of their movements when the ball was played upfront to initiate their attacks. The coach also stressed the importance on how the defenders transferred their marks. The session was conducted for nearly 90 minutes as the coach kept on telling the players to get used to the pitch conditions in Indonesia.

The players were given the afternoon to rest up, as the team will restart its training on Sunday 21 ahead of their next group stage match against Thailand. 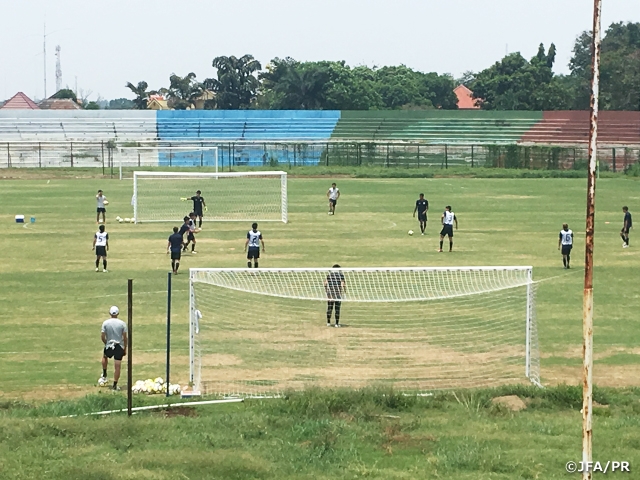 DF #17 ISHIHARA Hirokazu (Shonan Bellmare)
In yesterday’s match, the entire team was able to share a mutual goal, and everyone was motivating each other by staying vocal, including those who were on the bench. Although we conceded two goals, it was a victory earned by everyone on the team, so it gives us great confidence moving forward. The match gave us the opportunity to realise that the competition in Asia is going to be very difficult. It gave us an idea of what to expect in the upcoming matches. The two goals we conceded and the way we managed the match were somethings we must improve ahead of the next match. If we can improve those aspects and take control of the match, these matches would be much easier for us. All of our opponents will come out aggressively to win the ball, but I also take great pride in those battles, so I will not back down. I hope to showcase my aggression to encourage my teammates. Last year when we faced Thailand, they played very defensively against us, so we may face a match where we dominate the ball possession. In those types of matches, we must be creative to score goals and at the same time, be fully alerted against the opposing counter attacks. Our goal is to win the title and earn our spot into the U-20 World Cup, so we will face these matches one at a time to achieve our goal.

DF #21 OGIWARA Takuya (Urawa Reds)
Following the match against Korea DPR, our team has been surrounded by a very positive vibe. In our last encounter against Thailand, they stayed deep in their territory and anticipated for their opportunities to counter attack. We don’t know how they are going to come out this time, but we hope to score the goal early and create a game flow that better suites our style. At a personal level, I hope to display my strong points, such as my left foot and fast breaks, so that I can contribute to our offence more often. We have entered this tournament with the goal to win the title and earn our ticket into the U-20 World Cup. The next match will be a crucial match in order for us to achieve our goal, so I will give my best to contribute for the team’s victory.

MF #10 ABE Hiroki (Kashima Antlers)
Everyone came back to the bench with a smile after our match yesterday. At the same time, everyone was aware that we must make adjustments after conceding the two goals in the match. I know that the coach relies on me and I believe that it is my job to figure out what I must do to help the team out. When I was called up as a substitute, the coach didn’t give me specific directions, but I was fully aware of my job. Our goal is not simply just to qualify through this tournament, but to win every match. We will do our best to maintain our conditions and prepare ahead of our next match.