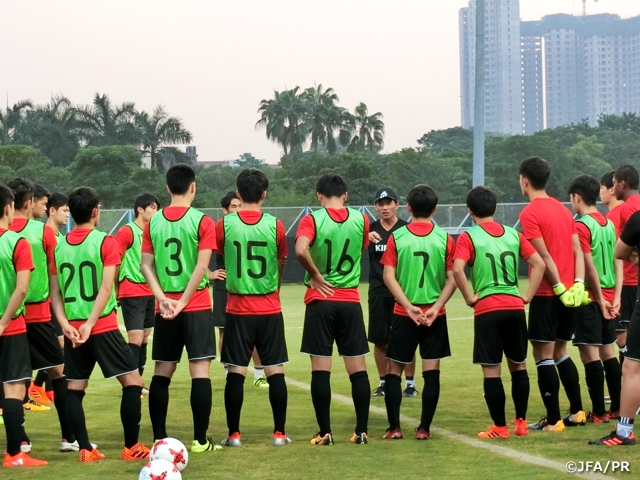 All the group-stage fixtures have ended in the FIFA U-17 World Cup India 2017 and the U-17 Japan National Team have qualified to the knockout stage of the tournament as runners-up of Group E. Their round-of-16 match will take place on Tuesday 17 October at the same venue where they had their third group-stage match in Calcutta.

With two days to prepare for the next match, the national team had a complete day off on Sunday 15. The following day on Monday 16, the entire squad repeatedly went through their formations and work on set pieces in training which was closed to the public except for the first 15 minutes. From the knockout phase, the winners will be decided by a penalty shootout without overtime, if the game is tied after 90 minutes of play and the team also practised penalties before finishing their training on that day. 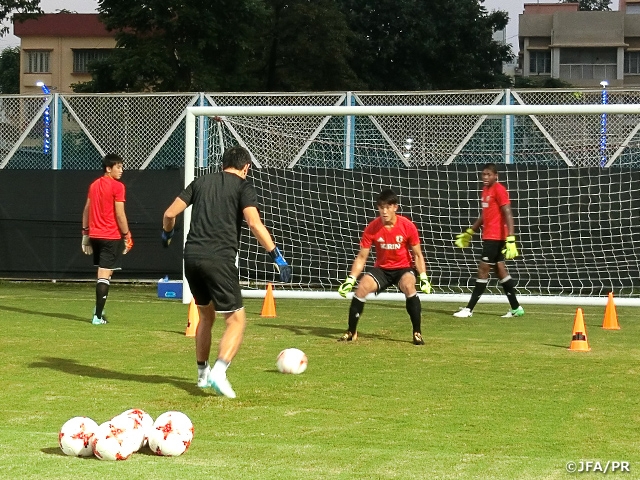 The next opponents for the Japanese national team will be England, who have beaten Chile 4-0, Mexico 3-2 and Iraq 3-0 and reached the Round of 16 by topping Group F. One of the strengths of the young England team is their individual talents as they have many squad members who have practised or played games at the top team of the Premier League or the Bundesliga.

The captain of U-17 Japan, FUKUOKA Shimpei, has stated, ‘We are going to enter the match with challenger’s spirit and compete with confidence without fearing the opponents.’ KUBO Takefusa added, ‘We have been working hard to compete against the opponents like the ones that we are going to be facing next. We are looking to showcase what we have done so far.’ As can be seen from the comments of the young Japanese internationals, the national team will get into the match to show what they have achieved after they have been assembled and the progress that they have made as a team.

The current squad members had started their national team activities in the JFA Elite Programme U-14 overseas tour to Korea Republic in 2014 and were officially formed when MORIYAMA Yoshiro took over the team as the head coach from the overseas tour in 2015. Going through many training camps and international tours, the team have gained the necessary experience to instil competitive spirit, while each player has developed self-confidence and the ability to make good decisions given the different circumstances they face during the game. Such experience included the match against New Caledonia on Saturday 14, where they played in front of a huge crowd and the voices of their teammates could be hardly heard.

The tough battles await for the “00JAPAN” as they enter the knockout stages of the tournament. It will start with the round-of-16 England match that kicks off at 8 p.m. (11:30 p.m. in Japan Time) on Tuesday 17. 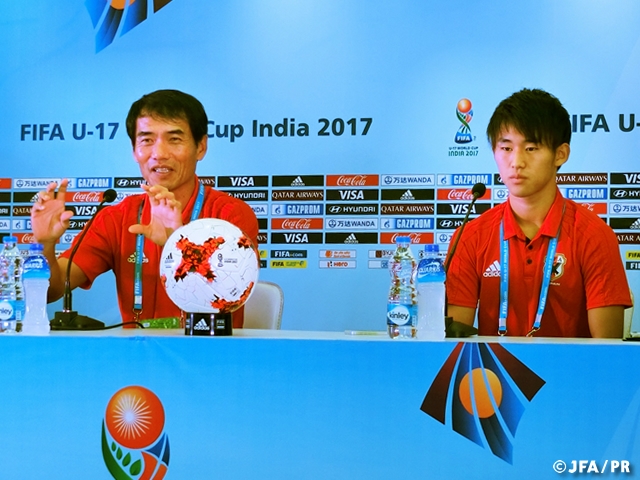 MORIYAMA Yoshiro, Coach (U-17 Japan National Team)
Football is not a sport where the teams that are equipped with better players or the summation of individual talents would directly give them the positive results. This is an interesting aspect of the sport. We are trying to capitalise on our strength which is the ability to play collectively against the potent England team. We have many players that can make the necessary adjustments and play collectively as a team by coaching each other on the pitch. We are ready to compete with everything we have and go all out for the coming match.

GK #1 TANI Kosei (Gamba Osaka Youth)
New battles start from this point on. England have one of the most talented groups of players in the tournament. Personally, I am happy to have a chance to play against such a team in the first round of the knockout stage, and will discuss with my teammates on how to compete effectively against them as a team. If I do not allow them to score goals, then we are not going to lose. As long as we display what we have been working so far, I think that we will find a way to come on top of the coming contest.

MF #4 HIRAKAWA Rei (FC Tokyo U-18)
Reaching the knockout stage was one of our goals, and I felt great that we have achieved that goal. The most important battle awaits us. We have analysed our own games, and hopefully we will showcase our best game of the tournament. We don't have anything to lose, and are ready show our strong determination in winning the coming match.

MF #10 FUKUOKA Shimpei (Kyoto Sanga F.C. U-18)
We are looking to enter the England match with challenger’s spirit and compete with confidence without fearing the opponents. We are going to face tough stretches, and I believe that the top teams have the ability to make the necessary adjustments during those times by talking things over amongst the players on the pitch. We will try to do the same in similar circumstances we might face in the coming game.