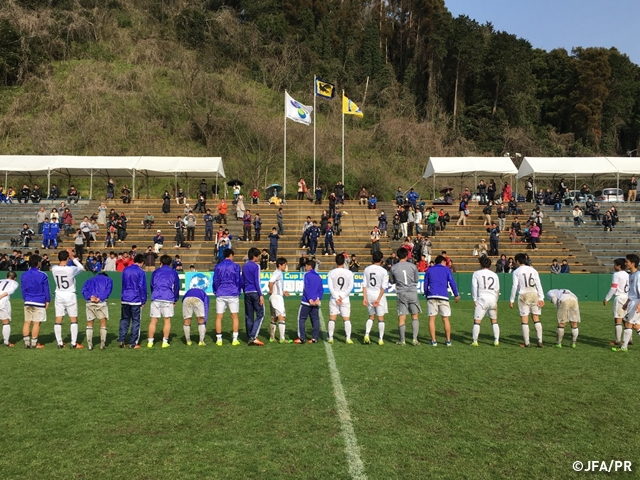 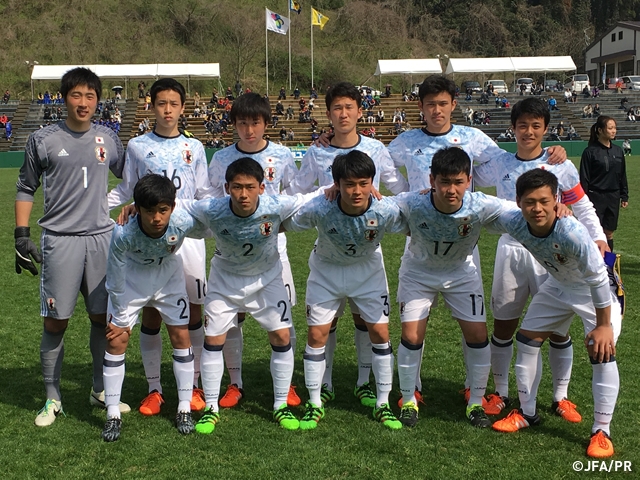 The third day of the SANIX Cup International Youth Soccer Tournament 2016 saw its knockout stage started where U-17 Japan National Team struggled but pushed their way through to the final match of the tournament.

In the quarter final, the national team faced Kyushu International University High School. Early in the match, they failed to create their own rhythm, overwhelmed by aggressive transitions between offence and defence by one of the country’s high school powerhouses. It was something they did not experience in the group stage. But after surviving through the tough stretch, they were awarded a corner-kick, which was utilised by midfielder HORI Kenta feeding the ball and defender AOYAMA Yusuke fiercely shooting it into the back of the net for the opener. Then again they fell into another difficult time in creating scoring opportunities due to passing mistakes and communication errors. In the additional time of the first half, they had the match equalised after giving away a corner-kick.

During the halftime, coach MORIYAMA Yoshiro passionately talked to the players. Then in the second half, his squad began moving the ball effectively with quick decision making. In the 49th minute, a ball was sent to defender SUGIYAMA Danto in front of goal who beautifully passed by one defender with dribbling for the shot to regain the lead. In the 55th, it was midfielder NISHIYAMA Taiga that put home the loose ball after a corner kick  to give his team the third goal of the match. Although they wanted to maintain the safe two-goal lead until the end, the opponents kept attacking before successfully cutting down Japan’s lead to one in the additional time. In the end, the match finished with Japan’s 3-2 victory. 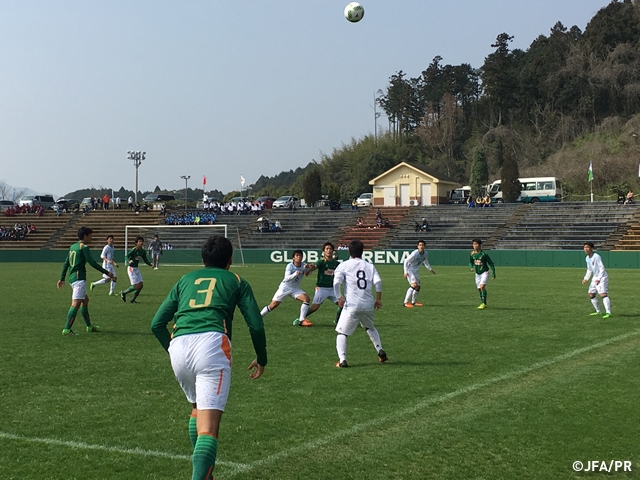 In the semi-final, U-17 Japan National Team took on Aomori Yamada High school. Similar to the previous match, they put themselves in a tough situation early by giving away chances to the opponents including a free-kick. Against Aomori Yamada’s outstanding physicality and quickness, goalkeeper OSAKO Keisuke and midfielder SAITO Mituski led Japan’s gutsy defence to limit the opponents’ critical chances.

In the 25th minute, after intercepting the opponents’ ball, midfielder NAKAJIMA Motohiko received it on the left flank, went by one defender and struck a long-distance shot to the right corner of the goal to open the scoring. Japan kept defending tenaciously and held on to the single goal lead until the end of the first half. The second half saw the see-saw battle early, but in the 47th, Japan took on a counter-attack where Saito’s cross was met by Nakajima who composedly scored again. Aomori Yamada did not give up their aggressive attacking and Japan gave away a penalty kick in the 56th. The spot kick, however, hit the cross bar in favour of Japan.

In the 67th, forward NAKAMURA Shunta robbed a back pass by an opponent and went around the goalkeeper to extend the lead to three. The score remained the same 3-0 until the finish, which moved U-17 Japan National Team up to the final match against Higashi Fukuoka High School.

DF  ISHIHARA Hirokazu (Shonan Bellmare Youth)
When I was watching the first match from the sideline, and I thought we were forced to play with the opponents’ pace. So we talked about it for the second match to outwill the opponents. Early in that match, we were pushed back and struggled for a long stretch, but we played patiently without allowing a goal, which I think led to the win. I personally found many things that I need to work on, so I will work on those things in training every day. This team have a few different ages together, but we communicate very well off the pitch, too, and our mood is good. I definitely want to win tomorrow for the championship.

MF  HORI Kenta (Yokohama F. Marinos Youth)
In the first half of the quarter final, our positioning was bad and we also had many things that we needed to correct, but we talked over them and corrected for the second half. That was good. But it’s very disappointing that I couldn’t show that much of my strength of long-distance shots and couldn’t score. The atmosphere among this team is very good. Japan’s national team have never won this SANIX Cup International Youth Soccer Tournament, so we want to win the first ever championship with this team.

FW  NAKAMURA Shunta (Kashiwa Reisol U-18)
It was physically very demanding to play two matches a day against very good teams. But we could advance to the final because our team came together and were united. I personally played for many minutes, but it was good that I could stay focused and kept playing. I want to improve my plays both when I am actively moving and when I am not in order to help my team more, then I want to do well tomorrow again. We want to write a new history by winning this tournament for the first time.