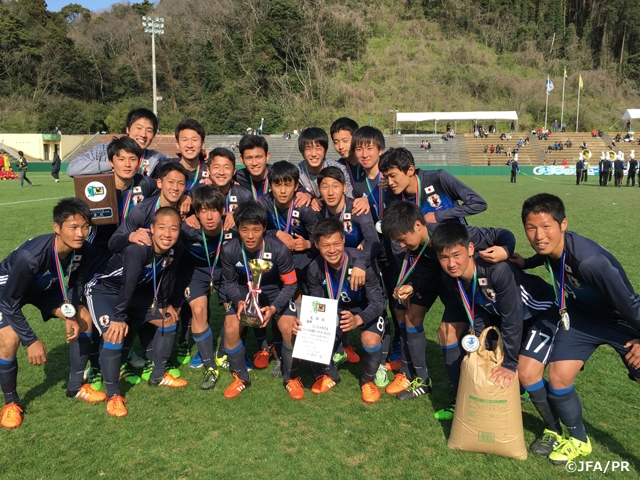 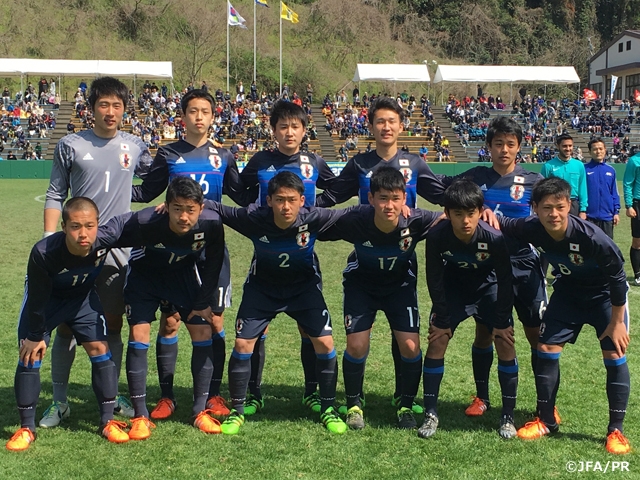 The schedule was tough, with six games in four days. The last day saw the final between the U-17 Japan National Team and Higashi Fukuoka High School, who were last year’s champions in the All Japan High School Soccer Tournament. Many people came to watch the match, which brought an excellent atmosphere to the site. Japan were pressed at the beginning of the game by the opponent, who moved the ball widely, attacking from the sides. However, the defenders were focused and the match continued to go to and from.

Although the forward NAKAMURA Shunta struck two superb shots in the 15th and the 18th minute, they unfortunately went wide. After 23 minutes, the opponent grab a second to attack through the right wing to take a shot from the centre, but the ball went over the bar of the goal. Then in the 28th minute, the ball was passed around up front, and the forward KUBO Takefusa sent a pass to the midfielder TANAKA Riku on the right side, who dribbled to the centre and made a strong shot with his left foot.

Japan struck the long-waited opener with a shot into the right-hand corner of the goal. Japan once again came under pressure from the opponent’s continuous attack. In the 37th minute, though the opponent struck a sharp free kick, the goalkeeper OSAKO Keisuke managed to punch it away.

In the second half, Japan continued to put in a tenacious defence while creating counter-attacks numerous times through 1-on-1. The midfielder HIRAKAWA Rei and Kubo played harmoniously to get through the opponent to take a shot, but they couldn’t add any more insurance.

The defenders, including AOYAMA Yusuke and FUJIMOTO Kanya, reacted to the opponent’s attacks calmly, while the midfielder SAITO Mitsuki ran around the pitch to intercept the ball to prevent Higashi Fukuoka’s goal-scoring opportunities. In the 80th minute, Saito himself ran up front to take a shot, only for it to go to the left of the goal.

Japan stayed focused until the final whistle, and won the game 1-0. The U-17 Japan National Team won the championship for the first time in 14 appearances at the tournament.

The next activity for the U-17 Japan National Team will be the 20th International Youth Soccer in Niigata in the middle of July.

OSAKO Keisuke (Sanfrecce Hiroshima Youth)
I’m over the moon that we won the tournament. More importantly, it was great we kept a clean sheet together in the final. Our team was excellent with a good atmosphere prior to games and good communications off the pitch. Personally, it was productive that I found some tasks to work on, including how to instruct the defensive line in detail, while showing off my strengths. I’ll practice hard from tomorrow back in my team, so that I’ll be called for the national team again.

NAKAJIMA Motohiko (Cerezo Osaka U-18)
I’m pleased that we finally claimed the title in this tournament. Although we were struggling with the opponent’s attacks from the wings a lot today, all of us worked really hard to defend, while scoring in our limited opportunities. I wish I could have scored a goal, but I’m just so glad that we won the game as a team. I found some tasks for myself from the staff’s advice and by watching my teammates’ plays. So I’d like to improve them back in my club team, in order to strengthen myself.

SAITO Mitsuki (Shonan Bellmare Youth)
I’m very pleased that Japan won the championship for the first time, and that I raised the trophy as captain. I was honoured and enjoyed myself playing games in front of a cheering crowd and an excellent atmosphere. As our team consists of players of different generations, we had combination problems due to a lack of communications at first. However, we improved by winning matches. We stayed focused until the final whistle as a united team today, and all of us played really hard to earn the victory. I’d like to work on my tasks, and contribute to my club and the national team. 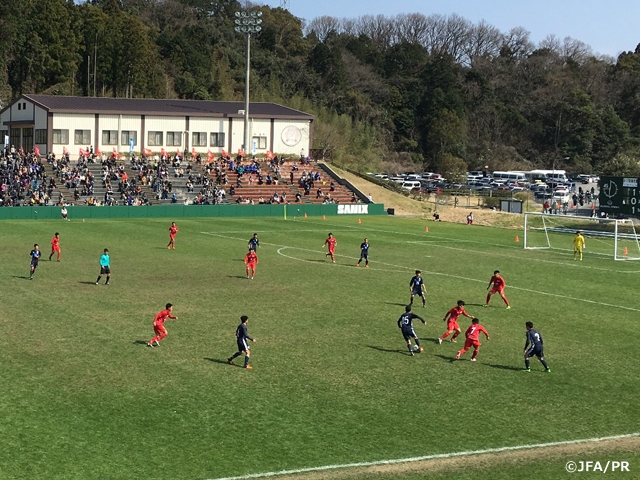