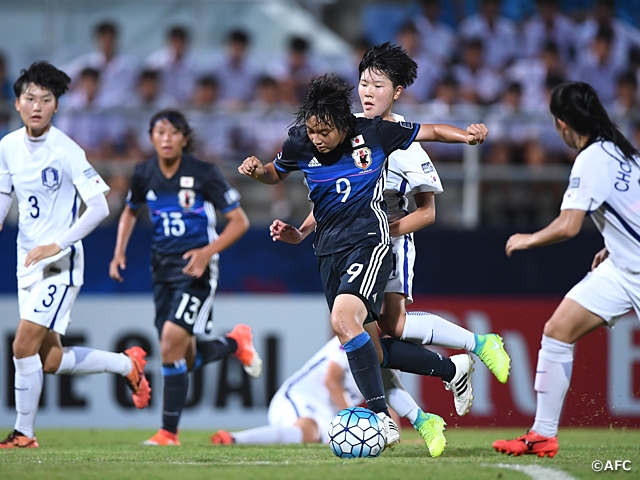 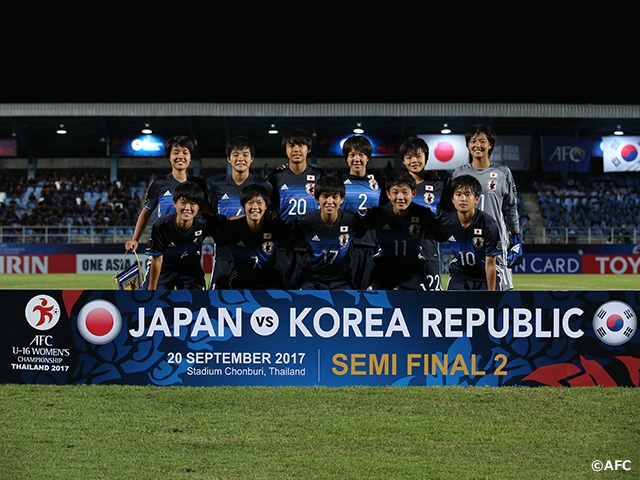 The second semi-final of the AFC U-16 Women’s Championship Thailand 2017 saw U-16 Japan Women’s National Team face DPR Korea at Chonburi Stadium at 19:30. Over 1000 spectators came to see the important game that would decide not only who would advance to the final and have a chance to claim the AFC title, but also the team who would qualify for the U17 World Cup next year.

It was slow start to the game as both sides were waiting to see the game plan of their opponents. Japan’s first chance came in the 24th minute, when TAKIZAWA Chise intercepted the ball and quickly found OSAWA Haruka, who sent a back-heel pass to YAMAMOTO Yuzuki. Then, the Japanese striker fired her first shot of the night, but failed to hit the target. Four minutes later, DPR Korea earned a free kick, but their direct attempt was safely secured by goalkeeper FUKUDA Shiori.

Another scoring opportunity for the Japanese squad came in the 38th minute. NAKAO Momo robbed the ball from the opponent and swiftly squared it to Takizawa. ITO Sara then collected a change-of-side ball and found TOMIOKA Chihiro in space to attempt a shot at goal. However, her effort went directly into the hands of the opposing goalkeeper before the game went scoreless at halftime.

After the break, Japan brought on TANAKA Tomoko for Osawa to give the team an additional arsenal in their attacks and she immediately responded by scoring a goal with outstanding individual effort. The second-half substitute and forward displayed her wonderful dribbling skills after receiving the ball for the first time in the game and carved open the solid DPR Korea’s defence to find herself in space right in the front of the goal to fire in a much-awaited goal for the Japanese team and give her side a 1-0 lead.

Gaining momentum after the opening goal, Japan created several more scoring opportunities. In the 56th minute, Tanaka reacted to the loose ball and had a one-on-one chance with the opposing goalkeeper, but her effort was off the target. After 59 minute, Ito claimed a throw-in ball and flicked it to Takizawa, who cut it from the right and struck from range, but hit the left goalpost and could not double the advantage for her side.

Crucial turn of events came in the 65th minute for the Japanese internationals, when the defender’s challenge was ruled foul play and the referee awarded a penalty to DPR Korea. The kicker made no mistake to covert it from the spot to level the match 1-1.

Just before regulation time, Japan earned a free kick, but the direct attempt was caught safely by the goalkeeper. Being all tied one apiece after 90 minutes of play, the game was now to be decided on penalties, where the ABBA penalty shootout was used instead of the conventional alternating team format. Japan suffered a heartbreaking defeat 2-4 on penalties to DPR Korea and missed their chance to advance to the final.

Japan will play their next and final match of the tournament on Saturday 23 September from 15:00 (18:00 Japan Time) and compete against China for the final spot in the FIFA U-17 Women's World Cup Uruguay 2018 from Asia.

DF #5 MATSUDA Shino (Nippon TV Menina)
We suffered a bitter defeat, but now must shift our mind to the next match and make the best possible preparations. In the China tour this July, we faced their national team once in an international competition. As I recall, they had excellent speed and strong physicality. However, we are looking to overwhelm the opponents in every aspect of the game including the battle for the ball as well. We will go all out and win the match.

MF #17 KINOSHITA Momoka (Nippon TV Menina)
It was our goal to win today's game and advance to the championship game. I am very disappointed that we suffered a bitter defeat. We will play in the third-place match and compete for the final spot in the World Cup. Thus, we must regroup before the next match in two days and enter the game with a competitive mind-set. To accomplish this, we must first recover from the fatigue after playing a tough semi-final and make a good preparation by encouraging each other. We are looking to avenge this loss by giving our best performance against China and come up with a win.

FW #9 TANAKA Tomoko (Cerezo Osaka Sakai Ladies)
The winners were not decided in regulation time, and I felt responsible for today’s loss after missing a spot kick in the penalty shootout. In order to win our next game against China, we need to make a good preparation in the next two days. I am looking to score again and contribute to the team’s win as well. 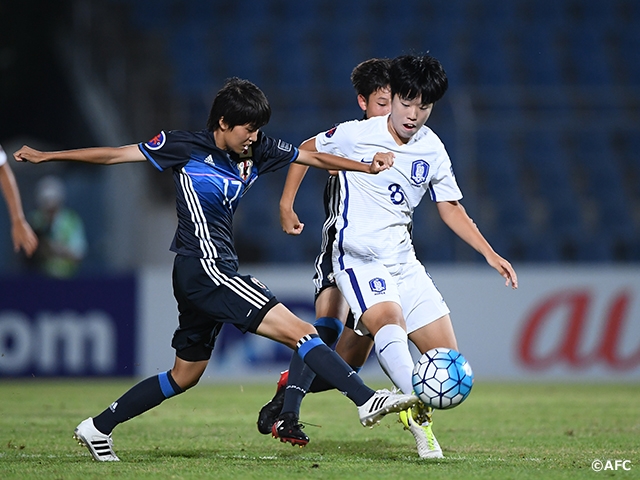