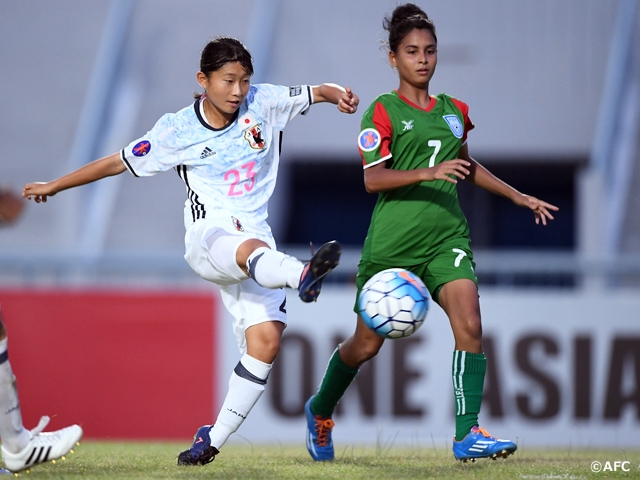 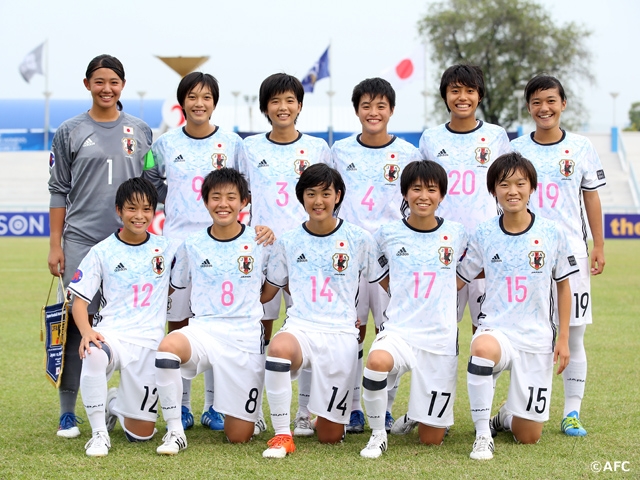 Thursday 14 September saw the second group-stage match of the AFC U-16 Women’s Championship Thailand 2017 for the U-16 Japan Women’s National Team as they squared off against U-16 Bangladesh. Filled with anticipation as the young Japanese squad aim for a place in the playoffs, the game kicked-off at 17:00 (19:00 Japan Time).

In the second minute, YAMAMOTO Yuzuki sent in a through pass to the front of the goal, but could not time it well for TANAKA Tomoko to attempt a shot. Three minutes later, Yamamoto after collecting the ball on the left flank, cut inside and then advanced into the box to fire a shot, but the opposing goalkeeper had no problem in saving the shot that was directly aimed at her.

The deadlock was broken after 12 minutes, when Japan earned a free kick. Yamamoto’s low delivery was met by Tanaka with an exquisite first touch altering the course to open the scoring for the Japanese squad. 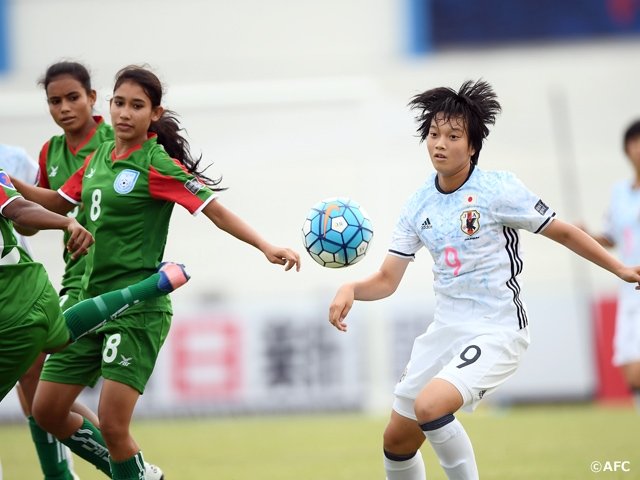 In the 23 rd minute, KINOSHITA Momoka nearly doubled the advantage when she robbed the ball at the half-way line and surged up the pitch to strike a shot, but her effort unfortunately struck the crossbar.

On 30 minutes, after an exchange of pass with Tanaka, NAKAE Moe drove up the pitch to fire in a fantastic finish to give the Japanese team a 2-0 lead.

Japan continued to attack after a pair of goals and capitalised on a chance fashioned in the 39 minute. After being played through on the right side, Yamamoto dribbled up the field to find herself with space to strike home a third goal for her side before halftime.

The young Nadeshiko threatened the opponents goal as they orchestrated several chances in the second half, but failed to take advantage of any of them. In the 65 minute, KATO Momo’s cross was met by GOTO Wakaba in the centre, but her shot was secured comfortable by the opposing keeper. Additionally on 71 minutes, ISHIDA Chihiro centred the ball to Tanaka, but the young Nadeshiko striker could not add to the lead as her attempt was fired directly towards the goalkeeper. Few substitutions were made in the remainder of the match, but they were unable to impact the game before ending in a scoreless second half and finishing with a 3-0 win over Bangladesh.

U-16 Japan will resume their training tomorrow and get ready for the third group-stage match against U-16 DPR KOREA on Sunday 17 September.

GK #1 YAMASHITA Rina (Cerezo Osaka Sakai Girls)
It was great that we won the match, but one of the issues we need to address is that we were held to only three goals. We were able to take the ball all the way up to the front of the goal to attempt a shot, but the opposing goalkeeper caught or parried away our shots or nobody was there to meet the cross balls inside the box. If were more clinical towards the end of our plays, then we could have scored more goals. I felt the need to improve on our finishing touches as well. On the positive note, we spent most of the time in attacking, but kept our focus and managed our defensive risks as well. We will continue to work hard in training and try to improve our team before the next match against DPR KOREA.

MF #17 KINOSHITA Momoka (Nippon TV Menina)
We faced Bangladesh today. In the first half, we could not move the ball well as only few players were involved in attacking plays. As a result, we could not find a good rhythm in attacks as well. In the second half, our opponents adjusted their zonal defence by shifting defensive blocks, and we could not carve open their defence nor score a goal. Looking at the entire team, we need to have more players involved in attacks and, at the same time, improve the quality of our finishes as well. We still manage to win the game, but found many areas that we need to work on. We will address those issues in training, and make the necessary adjustments before the next match as well.

FW #23 MOMONO Miyuka (Cerezo Osaka Sakai Girls)
I entered the game from the second half. I was able to play to my strengths by exploiting the space behind the backline and attempting few shots during our attacking plays, but failed to take advantage of them and score a goal. Furthermore, the timing was slight off and I wasn’t able to respond well to the cross balls as well. On the other hand, I believe we did well in defence as we did not hastily challenge the opponent with the ball, but waited patiently for our chances to regain possession. I believe that a forward player has an ability to change the mood of the team or gain momentum by scoring a goal. I failed to accomplish this task today by not scoring in the game. I will maintain my concentration both in training and matches as I continue strive to make positive changes and contributions to the team including scoring goals.