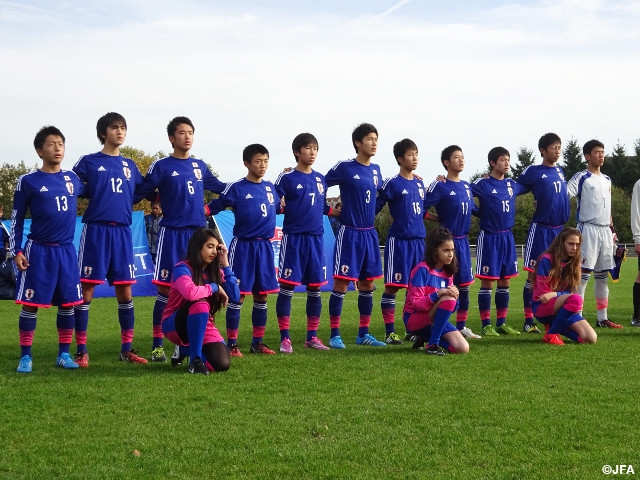 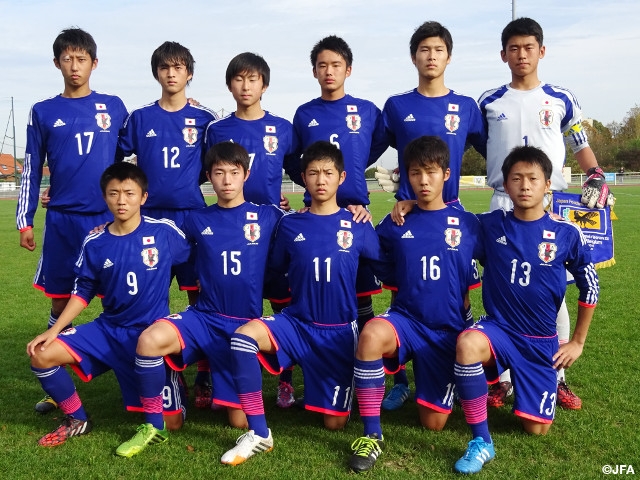 The U-15 Japan National Team fielded six new players from their opening loss and faced their second match with refreshed minds. After 16 minutes, despite an early cross from Kawamura at left back was blocked, Tanaka received the cleared ball and got through the opponent’s defenders with a one-two with Sakai. Then he struck the opener into the left-hand corner.

Japan enjoyed plenty of possession and led the game. However, in 26th minute, Verlinden Thibaut, who was on the left side received a cross from the right, dummied the defenders and fired in a shot. The Belgium national team built up positive momentum after that. Then after 36 minutes, Verlinden Thibaut once again started the attack from the left side and crossed the ball with speed into the area. The ball accidentally hit a Japanese defender, who was trying to clear it, on his leg, and went into the goal. It was an unfortunate own-goal for Japan, but the players never gave up making shots on goal. Just before the whistle in the first half, Sakaide headed in a shot from the second of two consecutive corner kicks, leveling the game.

In the second half, both teams played aggressively, showing plenty of ambition for goals. In the 46th minute, Belgium stole the ball in front of the goal area and swiftly moved to take a shot. The Japanese defender, who blocked the shot in the penalty area, was judged to have handled the ball. Then Sory Bah scored calmly from a penalty kick, building a one-goal lead again. Japan kept trying to score aggressively with different formations, but could not find the back of the net against the opponent’s solid defence. Japan lost again with some issues to be fixed, just like the previous match against the Netherlands.

YOSHITAKE Hirofumi, Head Coach
We fielded six new players from our first match for today’s game against Belgium. Before the match I told the players that if we lose, there’ll be no chance of winning the championship at all, that if we level the game, there will be a 50% possibility, and that if we win, there will be 75% possibility. At the outdoors meeting in the morning, we checked together our built-up strategy, when the opponent has two forwards. However, despite the opponent having only one forward in the actual match, the players continued to use the same method. Having said that, we did keep possession for a certain amount of time. The reason we couldn’t score despite the fact we led the game is the lack of appropriate judgment to carry the ball toward the goal. We conceded three goals. It wasn’t because our defence let the opponent run through. We just dug our own grave.
We showed our weakness at not being able to forecast the ‘opponent’s movement with the ball’. We received a compliment about our organised attacks and defences, and our detailed skills by the staff and the opponents. However, I have to admit some level difference in their understanding football itself in this age between Japan and the other countries, including adjusting to a ’80-minute match’ and ‘105m-by-68m pitch’. Although we can’t experience a high-pressure match, deciding the championship, for our last match, we’ll do our best to beat the host country, France.

SAKAI Go(FC Regunova)
During the match, I tried to bear in mind that I need to move a lot more to be close to the ball. Although I wanted to contribute to the team by keeping the defensive line back and aiming behind the opponent’s defenders, I couldn’t do it well. I couldn’t ‘stop the ball properly first’ and ‘play thinking of the next step’, which are both essential. I’d like to fix those issues in tomorrow’s training session. As we haven’t won a match yet, I will try my best, running hard, in order to win the game with good content. 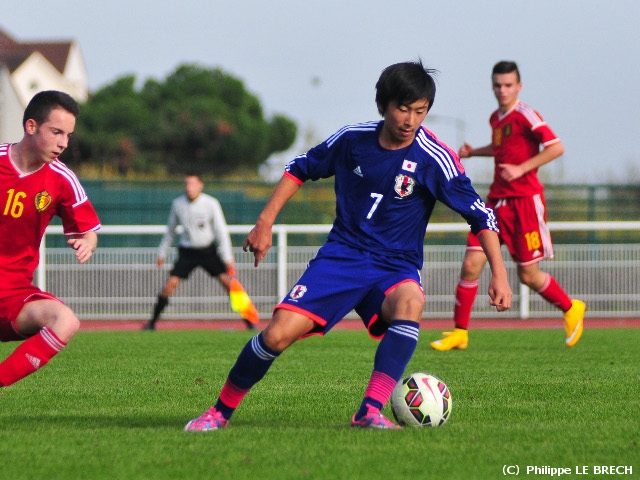