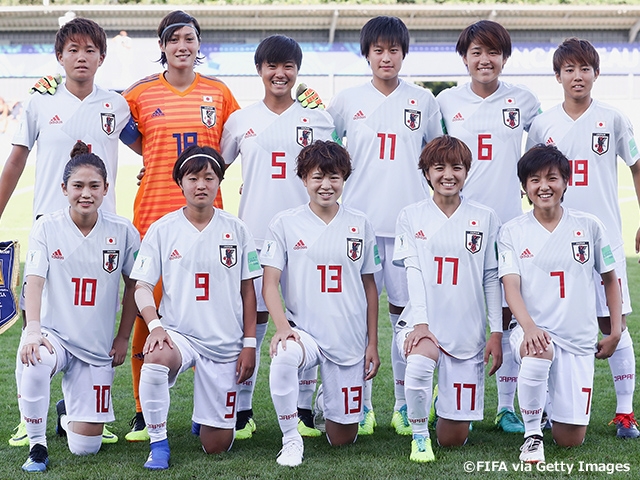 On Monday 6 August, the U-20 Japan Women's National Team played in their opening match of the FIFA U-20 Women's World Cup France 2018 against U-20 USA Women’s National Team and recorded a victory with a score of 1-0.

With the USA side starting off the match aggressively, the Japanese defence led by their goalkeeper STAMBAUGH Hannah were tested in the early minutes, as many shots were taken to threaten their goal. Japan also sought for their opportunity as forward TAKARADA Saori’s header struck the cross bar in the 30th minute. Despite both teams creating many chances, the first half ended scoreless.

The second half saw the Japanese side loosen up as they displayed much more scenes creating chances through their fluent ball movements, as Coach IKEDA Futoshi later reflected, “During halftime, I told my players that they were too stiff in the first half and emphasised the fact that we are playing in the World Cup. I told them to keep making plays to support their teammates.” The deciding goal of the match came in the 76th minute when midfielder HAYASHI Honoka forced a turnover near the centre arc and launched a left footed shot. The ball was driven over the head of the opposing goalkeeper and shook the cross bar before finding the back of the net. Now desperate to level the match USA made a last-minute attempt from a corner kick to threaten the Japanese goal, but defender USHIJIMA Riko made a brilliant save right on the goal line to deny the potential equaliser to get in. The match ended with a final score of 1-0 as the U-20 Japan Women’s National Team started off the FIFA U-20 Women’s World Cup France 2018 with a victory.

The Japanese captain, MINAMI Moeka was named the player of the match. 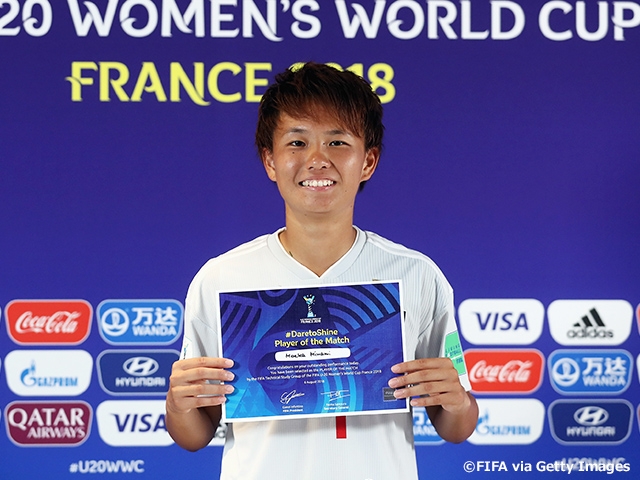 The U-20 Japan Women's National Team will now face the U-20 Spain Women’s National Team on Wednesday 8 August with a kick-off time of 16:30 local time.

IKEDA Futoshi, Coach (U-20 Japan Women's National Team)To contain the speed exerted by the USA side we had to play collectively and defend as a group. During halftime, I told my players that they were too stiff in the first half and emphasised the fact that we are playing in the World Cup. I told them to keep making plays to support their teammates. I believe that our thorough preparation and hard work led to us to victory.

DF #4 MINAMI Moeka (Urawa Red Diamonds Ladies)
Everybody contributed to win this tough match. Winning against a powerhouse like the USA is a huge step forward for us. We knew we were going to face difficult stretches, so we set our priority to keep a clean sheet. We will make sure to reset our minds ahead of our match against Spain.

MF #7HAYASHI Honoka (CEREZO OSAKA SAKAI LADIES)
(At the goal scene) I saw the goal and also saw the goalkeeper out of position, so I went for it. Heading into the match we were focused on the one-on-ones and wanted to display our collective efforts of challenge and cover, while working hard throughout the match. We would like to carry this momentum into our next match against Spain and record another victory. 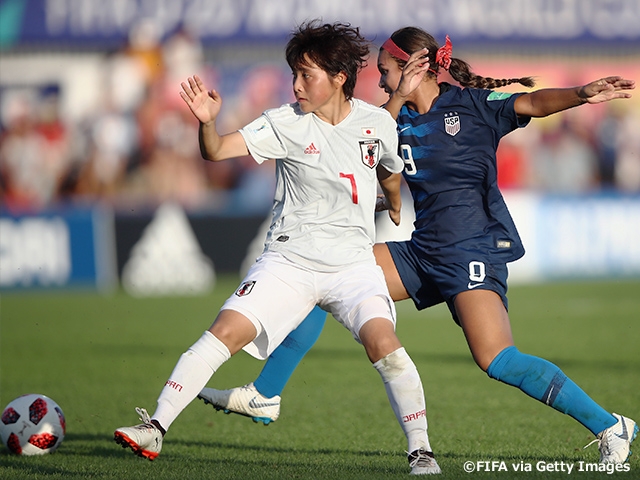