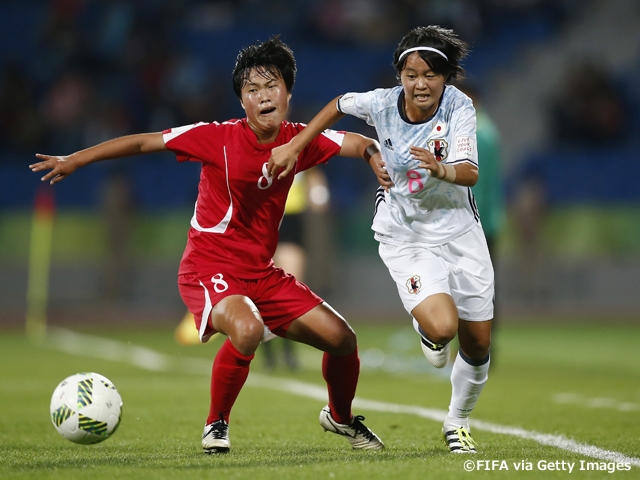 Japan aimed to become back-to-back champions after the 2014 championship in Costa Rica, while DPR.KOREA have advanced to the finals three times in total, including the one in 2008, where they claimed the title in New Zealand. Both teams, who have demonstrated their strengths in the U-17 tournaments around the world, were competitive from the beginning of the match.

Although Japan struggled against rapid pressure from the opponents early on, the team gradually found their rhythm by passing just like they had done throughout the championship. In the 10th minute, after MIYAZAWA Hinata and TAKAHASHI Hana coordinated well to break through on the left side, TAKARADA Saori attempted a shot at goal with her left foot. And, in the 20 minutes, NAGANO Fuka aimed at the goal directly from a free kick, which was punched away by the opponents’ goalkeeper. Takahashi reacted to a loose ball, but could not find the back of the net. Despite showcasing their depth in offence, Japan failed to capitalise on their scoring chances in the early part of the game.

However, Japanese side continued to attack the opponents’ goal. In the 28th minute, Miyazawa cut into the centre to fire a shot, only for it to hit the crossbar. In the 41st minute, the ball was passed to the intended target player up front, UEKI Riko, who found Takahashi, and she in turn got through on goal from a tight angle, but her shot went wide. The match went into the second half 0-0, despite the fact Japan took 14 shots, while DPR.KOREA had only two.

In the second half, Japan struggled to cope with DPR.KOREA’s offence, where they did not build-up their attacks in the middle of the field and rather used long balls. After 53 minutes, when goalkeeper TANAKA Momoko ran towards the ball from the opponent and failed to catch it, SUNG Hyang Sim reacted to a loose ball and fired a shot. However, TAKAHIRA Miyu blocked it instead and saved their chance of scoring. 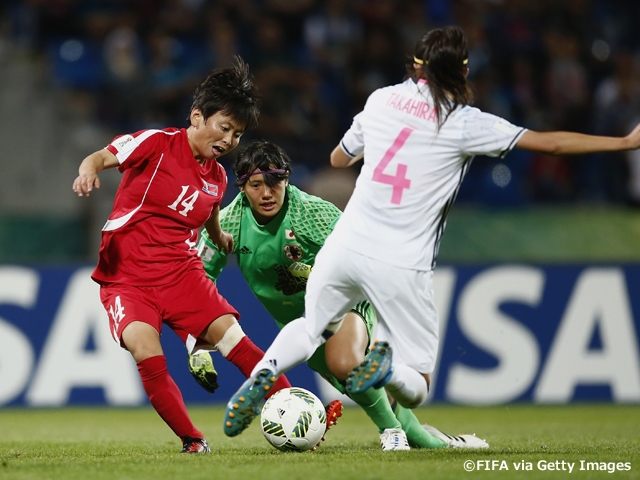 Although Japan went close to the goal with KANNO Oto’s shot in the 61st minute and Nagano’s long-distance ball in the 63rd minute, the opponents’ goalkeeper defended solidly to prevent Japanese side from striking the opener. As Nagano later commented: ‘we made small mistakes in passing and couldn’t find our rhythm’, Japan found it difficult to attack due to careless mistakes in the centre or the backline, allowing the opponents to move forward with the ball.

After 75 minutes, Japan passed the ball around and waited patiently for the opportunity to score against DPR.KOREA, who started to show tiredness. The players sent forward passes to break through on the wings and went close to the goal numerous times. However, the opponents defended tenaciously and kept the Japanese side from scoring the game-deciding goal. The score stayed at 0-0 until the final whistle, and the game went to penalties.

The fourth kicker of Japan failed to score on penalties, while all five kickers of their opponents successfully converted them. DPR.KOREA won the close contest 5-4, claiming the title for the second time since the 2008 championship.

Although Japan could not become back-to-back champions, the team won the ‘fair play’ award at the closing ceremony. Furthermore, captain NAGANO also won the ‘adidas GOLDEN BALL’, or the Most Valuable Player award, and received a big applause from the crowd. 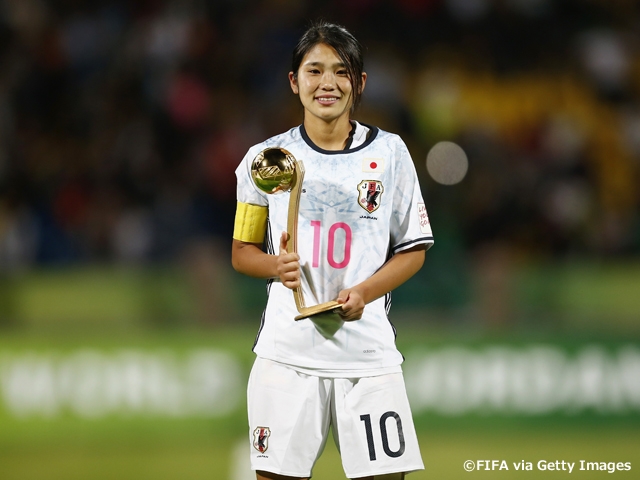 KUSUNOSE Naoki, Coach
Although it was a really regrettable result, I’d like to point out that the players displayed their style of football which they were aiming for. We couldn’t score from our goal-scoring opportunities. We overwhelmed the opponents in possession and attempted more shots, but unfortunately we failed to capitalise on our chances. After the game, I told the players that ‘this kind of result can happen in football’. I believed the players also learned how tough football can be.

This team has improved significantly after competing the world competition. I believe they attained the technical and mental skills necessary to perform with consistency, regardless of who gets to play on the pitch. I hope each player seek her own ‘characteristic play’ in football. This is not end of their career and I wish they capitalise on this experience and become a better football player in the future.

GK #1 TANAKA Momoko (NIPPON TV MENINA)
Competing against DPR.KOREA who performed with strong determination, I realised that mental strength is vital in beating strong teams. Although we did keep a clean sheet, the opponents came close to scoring in numerous occasions. Therefore, we still have plenty of room for improvements.

We did feel the pressure to become back-to-back champions. Having said that, the Japanese team, who won the previous championship, were different from ours. So, we aimed to earn the title as a new team, staying positive throughout the tournament. Personally, I did perform as usual, not thinking too much about the title.

MF #10 NAGANO Fuka (Urawa Red Diamonds Ladies Youth)
I feel nothing but frustration, as we’ve been aiming at becoming the strongest team in the world. However, I’m grateful to my teammates and the staff members for working together throughour the tournament. We could have won the game if we had scored from our opportunities. I’m pleased that I won the adidas Golden Ball. I have nothing but thanks to my teammates and those who have been supporting me. I’d like to express my deepest gratitude. This championship brought me some confidence, but I’d like to keep pursuing a higher level of football, remembering this feeling of frustration whenever I see the trophy.

FW #9 UEKI Riko (NIPPON TV MENINA)
Although I’m disappointed since we’ve been aiming to win the championship, I’m also proud that I played throughout 90 minutes with my great teammates. Despite numerous goal-scoring opportunities from the beginning of the game, we couldn’t find the back of the net. I do feel responsible as a forward. We lost on penalty kicks, but failing to decide the match within 90 minutes was the bigger cause of our defeat. We couldn’t score in our vital game, which means we weren’t strong enough as a team. This is not the end of our football career. So I’d like to become the kind of player, who can lead the team to a victory in the big matches.