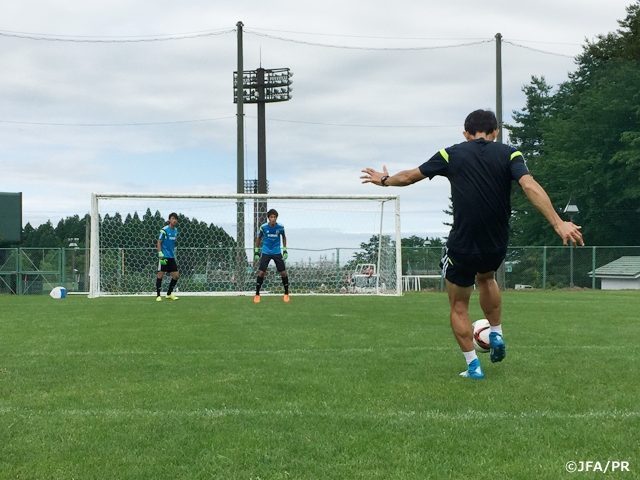 On the fourth day of the training camp, the U-17 Japan National Team made some small adjustments in preparation for the coming game against Mexico.

After the daily passing training, the team practiced keeping possession in a four-on-four with two free players in zones. The players focused on using the space behind the defenders or sending forward passes, rather than just sustaining possession. At the end of the session prior to the start of the championship, the players practiced in their respective positions – the attackers did some shooting, while the defenders went through build-ups. 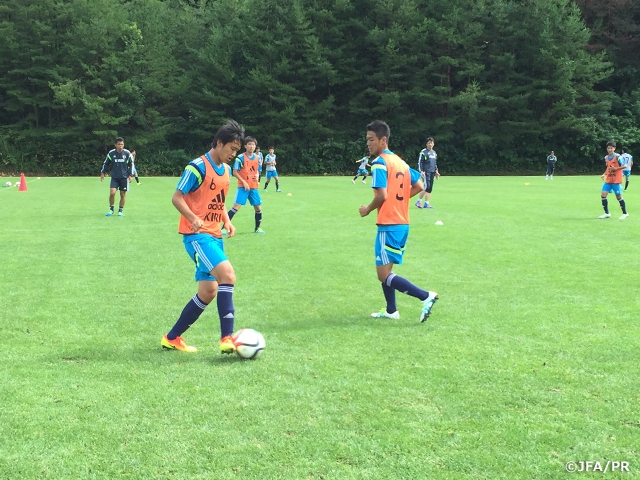 After the morning session, the team paid a visit to Yamagura Elementary School in Seirō-machi, where the first game against Mexico and the second against Croatia will be held. The players were interviewed by the pupils and were sent a shout-out by a cheering group. HORI Kenta and WATAI Masaki performed kick-ups, and the team played a game with some pupils. It was an exciting atmosphere.

The pupils gave the team a thousand hand-made origami cranes to wish the team good luck. NAKAGAWA Sou expressed his gratitude at the end of the visit.

The players realised once more that they are representing Japan thanked the pupils for their encouragement. 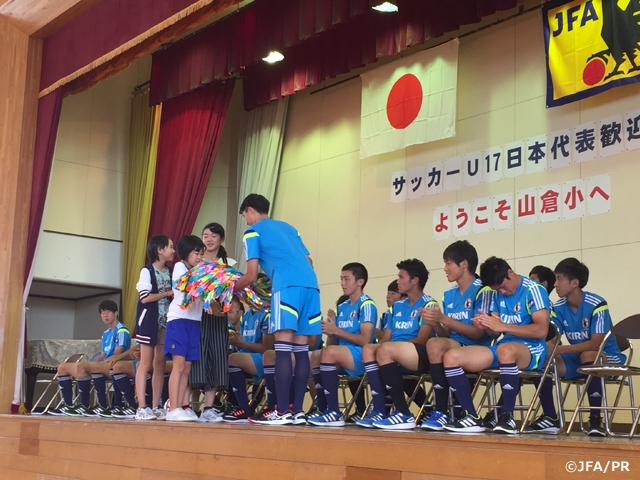 Saturday 16 July will see the opening of the championship. The U-17 Japan National Team, who will meet Mexico at 17:00 in the SpoIsland Seiro, have a strong resolve and aim to win all their game to claim the title.

MF #16 MURATA Masaki (Kawasaki Frontale U-18)
As I haven’t been performing well in my club, I was quite surprised to be chosen for the national team. I’m determined to show my plays during this camp to become a starter. I’ve been inspired to play with excellent players in high-level training sessions. I’d like to see how well I can perform against foreign teams, including basic skills, such as stopping the ball before kicking and contributing to the movement of the game in the coming three matches. I’ll try my best to achieve positive results in the limited time I've got. As a team, we’d like to win all three games and become back-to-back champions.

MF #7  FUJIMOTO Kanya (Tokyo Verdy Youth)
We had the final training session before the tournament. The team collaboration and combination have been gradually improving, which gave me opportunities to demonstrate my plays. As we share the same vision and the direction of our football as a team, we’d like to face the matches as we currently are. The players in this team are required to focus on forward movements and on the goal. I hope I can develop plays contributing directly to goals. We’ll aim at winning the championship with three victories.