Vilnius is the capital and largest city of Lithuania, with a population of 580,000 and is the second-largest city in the Baltic states. Compared to Palanga, a seaside resort town where the Japan Futsal National Team spent their first 15 days since arriving in Lithuania, Vilnius is classified as a Gamma global city, while the architecture in the Old Town is declared as a UNESCO World Heritage Site.

After saying goodbye to the hotel staffs in Palanga, the team left the hotel after breakfast, travelled about 330 km by bus to Vilnius. The team took lunch after arriving in the Lithuanian capital, checked into their hotel before heading to the training ground. The players who played long minutes in their match against Spain were seen going through a light menu to loosen their body following a four hour bus ride, while players with limited or zero minutes, such as MORIMURA Takashi, YAGI Kiyoto, SEKIGUCHI Yushi, YAZAWA Daimu, and MORI Gensuke, went through drills to work up a sweat. 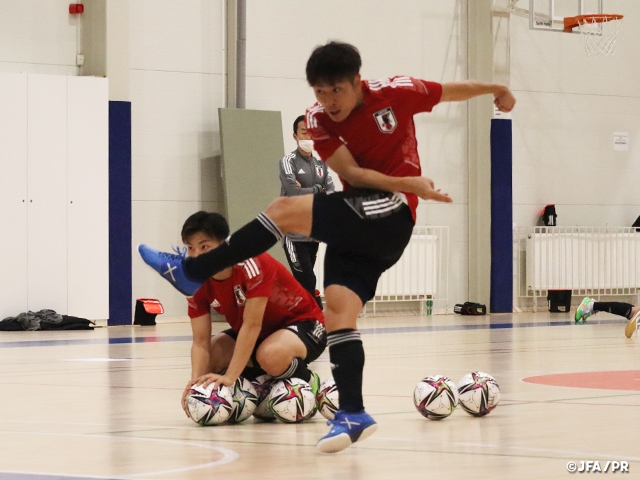 “We lost the match, but it was a match we can be proud of.” Said coach Bruno GARCIA, after his side played a close match against the top ranked country in the world, and mentioned, “The future is in our hands.” The Spanish coach continued by reminding the players what they need to do in order to accomplish their goal, “Our first goal is to clinch the knockout stage. We can achieve our goal by winning against Paraguay in our next match. In other words, it's all up to us. No one can distract us.”

The Japan Futsal National Team will face Paraguay on Monday 20 September with their ticket to the knockout stage at stake.

GK #1 SEKIGUCHI Yushi (Nagoya Oceans)
Before the World Cup kicked-off, I was getting overwhelmed by the excitement of finally reaching this stage, but once the tournament started, it is no different from the other international matches. Regardless of the competition, we have always given our best to win the match in front of us, but we are now playing with the pride of the Japan National Team. We are now in a situation where we can reach the knockout stage with a win. Our confidence level is rising after the performances we have shown in the first two matches, so we are focused on showcasing our usual performance in our third match. Unlike the field players, us three goalkeepers are always competing for one spot, and we all want to start. No one is willingly sitting on the bench, but we are all giving our best to fulfil our role. For example, Daimu has been out of the bench for the past two matches, but he has been supporting the team by encouraging us from stands. Igor supported me from the bench in the first match, while I supported him during the second match. I think all three of us are working as a great group where each one of us are aware and committed to fulfil our roles.

FP #3 HOSHI Ryuta (Nagoya Oceans)
With the team currently sitting in second place, we are in position where we can clinch the knockout stage with a draw or better. However, we need to enter the match with a strong intention to win, so we will give our utmost effort to win our next match against Paraguay. The team is relaxed and there is a positive vibe surrounding us. There is a sense of urgency, but everyone is fully aware of the current situation. Players have been actively communicating with each other, making it feel like we are a family.

FP #12 MORIMURA Takashi (Vasagey Oita)
After being left out of the bench for the first match, I was able to play in our second match. I wish I can play more, but I can’t be asking too much when I am given the opportunity to play in the World Cup. I am focused on giving my best performance within the given playing time and try to contribute for the team’s victory. The free kick I took in the second half against Spain was from a spot that was hard to score from. However, my strength lies on my ability to strike strong shots, so I focused on hitting the target to force a deflection off either the goalkeeper or someone in the mix. Spain showed wonderful pass works as a team while each of their players were always positioning themselves where they can support their teammates at all times. We are now facing Paraguay, who we have faced in Hokkaido, so we hope to make the most of that experience. If I am given the opportunity to play on the pitch, I will do my best to create chances for the team. There are things you cannot see when playing on the pitch, so I hope to support my teammates by providing a wider perspective.